Russia fears it is being elbowed out of the South Caucasus, and prepares to react

Russia is worried that the success of European diplomacy in approximating the positions of Armenia and Azerbaijan, and the prospect of a peace agreement before the end of the year, would see it elbowed out of the South Caucasus. 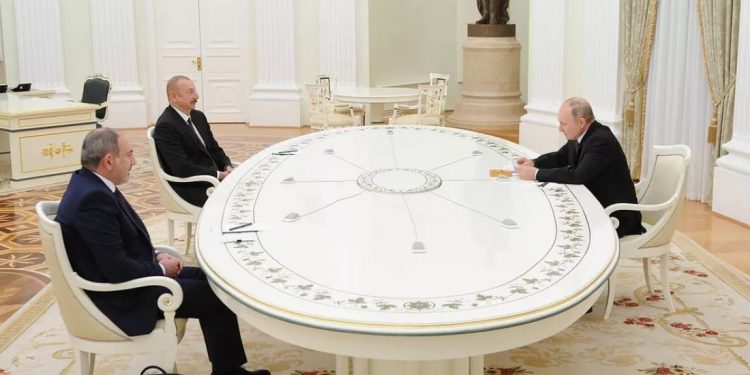 Russia may use its presence in Karabakh to throw spokes in the wheel, writes Vasif Huseynov in this op-ed for commonspace.eu. “This situation seriously threatens peace and stability in the South Caucasus. The region would  descend into a catastrophic escalations if the present peace efforts fail, and the Armenia-Azerbaijan conflict becomes another theater of the Russia-West confrontation. Baku and Yerevan, having declared their willingness to recognize each other’s territorial integrity and sovereignty, would suffer the most from such a situation. Hence, both should make efforts to reach a deal with a delicate geopolitical balance”, he writes.

The Armenia-Azerbaijan peace negotiations saw some important positive developments over the last few weeks. The leaders of the two countries came together on October 6, on the sidelines of the first gathering of the European Political Community. At talks mediated by the European Union (EU) Council President Charles Michel and French President Emmanuel Macron, President Ilham Aliyev of Azerbaijan and Prime Minister Nikol Pashinyan of Armenia confirmed their commitment to the Charter of the United Nations and the Alma Ata Declaration of 1991 through which both countries recognize each other’s territorial integrity and sovereignty. Since then, officials of both countries talked positively about the prospects of signing a peace treaty and said the treaty can be signed by the end of this year. Along with these efforts, the sides decided to accelerate the delimitation of the Armenia-Azerbaijan interstate borders. They brought forward the date for next meeting of the border commissions to the end of October from November, as had been previously agreed during the Brussels meeting on August 31. In parallel to the delimitation process, which, according to the head of the Armenian National Security Council, would likewise be finalized by the end of this year, the sides agreed on a two-month deployment of a civilian monitoring mission of the EU  to the Armenian territory alongside the border with Azerbaijan, starting this month.

Although the talks look to be going more or less constructively between Baku and Yerevan, this time the process runs the risk of being stalled by the confrontation between the mediators (i.e., between the West and Russia). This risk has been  discussed by regional experts since the beginning of the EU’s mediation as many warned that this would frustrate Russia as Moscow would see its influence in the South Caucasus   being challenged. Russia, periodically, criticized the EU’s attempts to “hijack” the Armenia-Azerbaijan peace process and warned against “geopolitical games”. Despite this, no major public actions were taken by Russia against the EU mediation which has so far delivered a list of agreements critically important for peace and stability in the region. It was through the EU-mediated meetings that the sides finally reached agreement on the border delimitation and a peace treaty – the two major items of the peace process on which the Russia-mediated talks had previously failed to bring the sides to an agreement. The lack of success in the Russian track of negotiations made the disputing parties, particularly Azerbaijan, more interested in the European track.

However, Russia has now started to voice its objection to the Western mediation between the two South Caucasian republics more loudly, and plans to re-activate its role in this process. First of all,   Russian officials have stated that there is a Russian proposal for a peace treaty which reportedly suits Armenia’s objectives more as it postpones a decision on the future of the Karabakh region, and seeks to regulate primarily the border issues. This would be in line with Russia’s plans to extend the mission of the Russian peacekeepers in the region beyond 2025. On the contrary, the proposal being discussed in the EU-mediated format envisions the establishment of a mechanism dealing with the future of the Karabakh region which would reduce the need for the peacekeepers, and eventually eliminate such a need if negotiations succeed.

Secondly, Russia, has said it is appalled by the deployment of an EU mission to the border, and proposes the deployment of a monitoring mission of the Collective Security Treaty Organization (CSTO). Russia’s Foreign Minister Sergey Lavrov, in  a quite intense meeting with his Armenian counterpart in Astana, accused the Armenian side of being reluctant to cooperate with the CSTO on this issue. This is certainly viewed by the Kremlin as an alarming sign of the eroding influence of Russia in the South Caucasus. Hence, as part of its countermeasures, Moscow seeks to reactivate the trilateral format of the negotiations between the leaders of Armenia and Azerbaijan with President Putin’s mediation that was convened last time in November 2021.

Russia indeed would feel “provoked” if its version of a peace treaty is ignored, while that of the West gets signed, disregarding Russia’s interests and concerns. The least Russia would do in such a case would be to mobilize its influence over the separatist leaders in Karabakh to throw a spoke in the wheel of the EU-mediated peace treaty’s implementation. There have been many statements from the separatist regime in the recent months which declared their willingness to become a part of the Russian Federation in the case of Armenia’s recognition of Azerbaijan’s sovereignty over the region. Russia’s military presence in the region under the name of a peacekeeping mission further strengthens Moscow’s position, and casts doubt over the implementation of any deal agreed without Russia’s support.

This situation seriously threatens peace and stability in the South Caucasus. The region would  descend into a catastrophic escalations if the present peace efforts fail, and the Armenia-Azerbaijan conflict becomes another theater of the Russia-West confrontation. Baku and Yerevan, having declared their willingness to recognize each other’s territorial integrity and sovereignty, would suffer the most from such a situation. Hence, both should make efforts to reach a deal with a delicate geopolitical balance.

Dr Vasif Huseynov, Head of Department at the Centre of Analysis of International Relations (AIR Centre) and Adjunct Lecturer at Khazar University in Baku, Azerbaijan.