On April 2, the Azerbaijan National Agency for Mine Action demonstrated debris of tactical missiles Iskander, which, Azerbaijan argues, were used by Armenia during hostilities over Nagorno-Karabakh in the autumn of 2020. 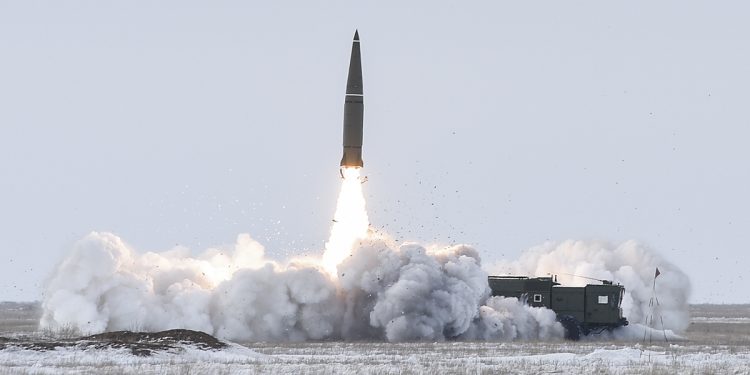 The issue of Baku’s claims that some debris of Iskander-M missiles have been found in Nagorno-Karabakh is being closely discussed by the Russian and Azerbaijani military, Russian presidential spokesman, Dmitry Peskov told the media on Tuesday.

“Military officials are engaged in a close dialogue. All corresponding questions are being discussed,” the Kremlin spokesman said when asked if the issue of Iskander missiles’ debris, reportedly found in Nagorno-Karabakh, was raised in a telephone conversation between Russian President Vladimir Putin and his Azerbaijani counterpart Ilham Aliyev.

Peskov answered in the negative, when asked if Putin and Aliyev discussed Russian helicopter Mi-24 that was shot down over Armenia near the border with Azerbaijan in November.

Aliyev said that on April 1 he discussed with the Russian president the reported discovery of debris of Iskander-M missiles in the city of Shusha. Also, he said that on April 4 Azerbaijan’s Defense Ministry sent an official query on the issue to Russian counterparts.

On April 2, the Azerbaijan National Agency for Mine Action demonstrated debris of tactical missiles Iskander, which, Azerbaijan argues, were used by Armenia during hostilities over Nagorno-Karabakh in the autumn of 2020. On the same day, the Russian presidential spokesman said that Iskander missiles were not used during the escalation of the conflict in the region in the autumn of 2020.