Russian Orion is unlikely to become a Bayraktar “killer”, because…

And here it is, beaten by the lowly Turkey. In Karabakh, Bayraktars easily destroyed many types of ground-based weapons that make up the core of the arsenals of the Russian army and, by extension, of its satellite Armenia. 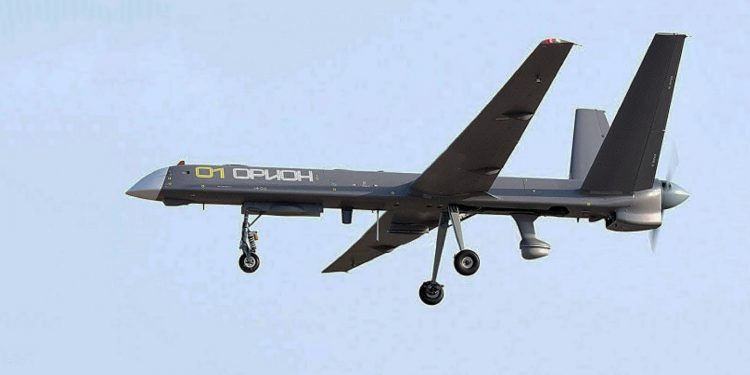 Russia is introducing a Bayraktar “killer” to the world arms market, a source in the Russian military-industrial complex told Russia’s media outlet RIA Novosti. That “killer” is Russia’s first ever export strike UAV, Orion-E, and there have been several orders for the drone already.

Only the reconnaissance version of Orion, the one without airborne weapons, was previously offered for export.

“Russian special export company Rosoboronexport and developer Kronstadt have started promoting an unmanned complex with a strike version of the Orion UAV, equipped with a universal weapon system, on the world arms market,” said the source.

He added that “proposals for the supply of the strike version of Orion were sent to a number of foreign customers who may require strike vehicles of this class, and several applications have been received from potential buyers.”

According to the source, real export deliveries of the strike drone may begin at the end of this year or early next year after the developer, Kronstadt, opens its UAV manufacturing plant in Dubna.

“The Russian Orion-E strike UAVs are expected to be one of the best offers on the market in terms of the price/quality/onboard intelligence ratio and to provide killer competition to drones such as Turkey’s Bayraktar,” RIA quoted the source as saying.

The press service of Rosoboronexport did not comment on the information provided by the source to RIA, but the company stressed that “the Orion unmanned complex does have a great export potential, and the interest in it is due to its unique tactical and technical characteristics and combat capabilities.”

The strike version of Orion-E is equipped with a universal complex of airborne weapons, allowing it to destroy both stationary and moving ground targets, enemy armored and other vehicles and manpower with high efficiency. Orion-E’s weapons include unguided and corrected aerial bombs, as well as various guided missiles. The maximum payload weight of the UAV is 200 kg, the total payload weight is up to 250 kilograms.

Orion-E belongs to the class of medium-altitude long-endurance UAVs. The drone is supplied to the Russian Armed Forces under the name “Inokhodets” (meaning “Pacer”). The vehicle’s maximum flight duration is 24 hours, maximum takeoff weight is 1150 kg, cruise speed is 200 km/h, and maximum altitude is 7 km. The wingspan of the drone is 16 m, its length is 8 m.

The Russian military actively used “Pacers” for reconnaissance and air strikes against terrorists in Syria as part of the flight tests of the unmanned complex. One particular UAV flew 38 sorties in Syria, including 17 with strikes at terrorist facilities.

As another source in the military-industrial complex previously told RIA Novosti, the guidance technology for “Pacers” during the strikes at terrorist facilities was tested in Syria using the modernized wearable Strelets-M reconnaissance, control and communications complex, resulting in higher efficiency and accuracy in hitting targets in real time.

Now, of course, we wonder whether Russia’s and Turkey’s achievements in the field of developing combat UAVs are even comparable. Could it be that this information—unofficial information, as it is provided by an anonymous source—is just wishful thinking? Perhaps the worldwide glory of Turkish military drones (especially after their triumph in Karabakh) hurts Russia’s pride, since Russia is used to thinking of itself as unrivaled when it comes to the quality of many types of weapons, even at the level of great powers? And here it is, beaten by the lowly Turkey. In Karabakh, Bayraktars easily destroyed many types of ground-based weapons that make up the core of the arsenals of the Russian army and, by extension, of its satellite Armenia.

Here is what military expert Azad Isazade, a former employee of the Ministry of Defense of the Republic of Azerbaijan, has to say on the matter.

“Until today, we have known Orion as a reconnaissance UAV that can also carry a small payload. As for the parameters mentioned by the anonymous source, they somewhat match those of Bayraktar, the model that was used in Azerbaijan. In some respects that Orion is superior to Bayraktar, in some it is inferior, so it is probably just too early to say that Orion really is a Bayraktar ‘killer’.

“We have to understand clearly what the words ‘Bayraktar killer’ are supposed to mean. I for one understand such a ‘killer’ as a vehicle that can easily and freely shoot down Bayraktars in the air or neutralize them. Based on the characteristics described in the RIA Novosti material, Orion is not designed to combat other UAVs. Therefore, it can be a Bayraktar ‘killer’ only in the sense that it will be Bayraktar’s competition in the arms market, making everyone stop buying the Turkish drones and start buying Orions instead.

“However, Turkish manufacturers are not resting on their laurels, they have already improved Bayraktar, and recently started mass production of the new UAV, Akıncı. There is also a UAV model for maritime use at the commissioning stage. That is, in the field of unmanned aerial vehicles, the Turkish defense industry is in a state of constant active and visible development.

“We should also be aware that the development of new UAVs will be stepped up all over the world, not only in Russia—Western countries will enhance their unmanned aerial vehicles as well. There will always be competition in this market, and I doubt that Orions can seriously compete with Bayraktars in the near future.

“The attitude towards UAVs has always been somewhat skeptical, they were considered as some kind of a secondary weapon, designed to support the primary weapon types. But Turkish combat UAVs first proved themselves a little in Libya, then demonstrated their superiority in full measure in Nagorno-Karabakh, taking their rightful place in the modern armed forces.

“I mean, Orion has to show itself in action, too. We only have information that Orions were used in Syria against terrorists, but that country has practically no air defense system that would work against drones. Still, the main protection against UAVs will be a technology not to destroy them, but to electronically switch them to another operator—electronic countermeasures to disrupt their missions.

“If Orion is used in real combat conditions or in some kind of military exercises, it will be possible to say definitively how effective and state-of-the-art it is. In the meantime, the above material citing an anonymous source raises more questions than it answers.”