Russia’s Caspian Flotilla no longer only force that matters there

Although Russia’s Caspian Flotilla remains the dominant naval force on the Caspian, it is not the only one that matters anymore. All four other littoral states—Azerbaijan, Iran, Kazakhstan and Turkmenistan—have been building up their own naval presences, particularly since various intra-regional disputes over access to oil and natural gas resources and infrastructure remain lively. 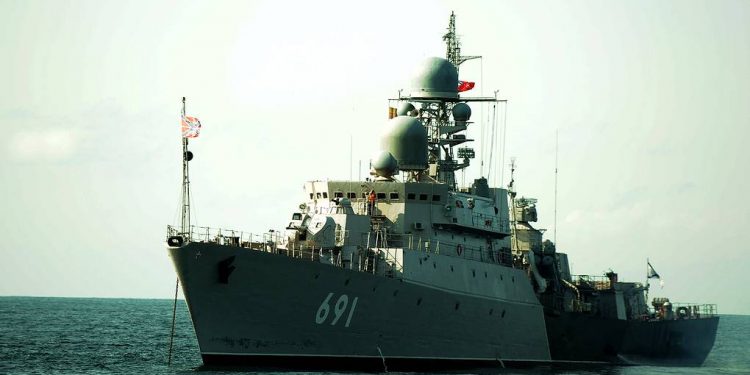 Although Russia’s Caspian Flotilla remains the dominant naval force on the Caspian, it is not the only one that matters anymore. All four other littoral states—Azerbaijan, Iran, Kazakhstan and Turkmenistan—have been building up their own naval presences, particularly since various intra-regional disputes over access to oil and natural gas resources and infrastructure remain lively. And despite the Caspian countries’ joint commitment to keeping other powers out of future negotiations on the status of the sea, a shift in the geopolitical situation could eventually change that. Of particular concern to Moscow are the possible future roles of Turkey, which is a major shipbuilding country, and of China, which views the Caspian as an integral part of its “One Belt, One Road” program (also known as the Belt and Road Initiative, or BRI). Moreover, as Russian observers note, the non-Russian littoral states already have one advantage: their ships, while less numerous and powerful now, are far more modern than those of Russia’s Caspian Flotilla.

In a detailed survey of the current naval situation in the Caspian, independent Moscow-based military analyst Aleksandr Khramchikhin notes that, after World War II, Moscow did not disband the Caspian Flotilla, because Iran was also a littoral state. Yet because the Soviet government did not view Iran as a major threat, over time the Caspian Flotilla was allowed to decay—always last in line to receive new vessels compared to the Soviet Union’s more important fleets. However, “after the disintegration of the USSR [Union of Soviet Socialist Republics], the situation [in the Caspian Sea] changed in fundamental ways.” The newly emerged Russian Federation faced not just one foreign country and its navy there but four, and its share of the coastline was far from the largest. Moreover, despite 30 years of talk, the five countries have still not completely agreed on the delimitation of the sea and, in particular, its mineral-rich seabed (Nezavisimaya Gazeta, June 17).

In the 1990s, he continues, this new situation meant that the decay of the Caspian Flotilla was not as sharp as it was in the other fleets. Moreover, Moscow maintained its dominance because the Iranian fleet was small and out of date while the fleets of the other three newly independent littoral states were only in the process of being formed—Azerbaijan received a quarter of the Soviet ships and Kazakhstan and Turkmenistan had little reason or cash to build anything more than search-and-rescue vessels that were also used to fight poachers. But with all four of the others now working hard to build up their Caspian naval presence and with conflicts among them and potentially even with Russia growing, the Russian government can no longer be as confident as it once was, Khramchikhin contends.

Russia’s Caspian Flotilla remains paramount, he continues, even though it seldom receives much attention except when its ships are used to launch missiles against Syria or are shifted to the Sea of Azov, as part of Moscow’s confrontation with Ukraine. Indeed, in some respects, it has even been strengthened with air power and landing craft in recent years (see EDM, June 7, 2018, November 27, 2018, December 4, 2018, May 28, 2019).

The Caspian Flotilla currently has 27 major vessels, and Khramchikhin provides details on their exact composition. Only two were built in Soviet times, and some have seen military service both against Chechnya in the 1990s as well as against Syria and Ukraine more recently. But the shift of Caspian ships to the Sea of Azov via internal Russian waters (the Volga–Don Canal) has had the effect of reducing the capacity of the Caspian Flotilla to counter threats in its home area, even though it simultaneously shows that Moscow can move ships from other fleets into the Caspian, should the need arise.

The Azerbaijani navy was formed when ships from the Soviet-era Caspian Flotilla were transferred to it in 1992 (Versia.ru, March 18). Since then, Azerbaijan has bought ships from Israel and Turkey and now has a fleet of some 44 vessels, most far smaller than their Russian counterparts but much more modern and, in some cases, comparably heavily armed (Windowoneurasia2.blogspot.com/, March 20). Over the past several years, the Azerbaijani navy announced plans to counter any threat to its oil fields or oil pipelines under the Caspian from any foreign power. Such statements were directed in the first instance against Turkmenistan and Iran, but Russians are concerned they may affect them as well (Report.az, February 11; Kaspiysky Vestnik, June 23). One consequence of these Russian worries was a decision by Moscow to veto plans to sell shore rockets to Azerbaijan lest they be used against Russia (Kommersant, June 24, 2021; Meduza, December 5, 2018). Khramchikin is dismissive of the Azerbaijani force now but sees the danger that it may grow.

Kazakhstan and Turkmenistan received no ships when the Soviet navy was divided. However, both have since been building up their forces. Kazakhstan now wields even more ships, albeit smaller ones, than either Russia or Azerbaijan. Turkmenistan is expanding its fleet to the point that, at least potentially, it may be “in second place” only to Russia’s Flotilla in terms of overall military power. Iran, too, has been bolstering its presence on the Caspian; but its larger ships are older, need refitting and replacement, and cannot be fortified by ships from elsewhere, because Iran lacks internal waterways. It may matter in the future but is less significant now, Khramchikhin argues (see EDM, May 28, 2020; Kaspiysky Vestnik, June 24, 2021).

Fleets do not cause conflicts, but their existence may lead to escalations; and conflicts abound in the Caspian, the Moscow military analyst says. All of them involve at least in some way Azerbaijan and Azerbaijan’s increasing links with Turkey, which could supply it with more and larger vessels. This must be a focus of Russian attention, Khramchikhin says. In the longer term, he argues, Iran and Turkey represent serious potential challengers to Russia’s hopes to remain the dominant power on the sea. Even Turkmenistan has the ability to take actions against Russian north-south communications lines, especially given the size of Ashgabat’s fleet. The only major power Russia does not need to worry about is the United States: Washington lacks the ability to insert ships into the sea, despite sometimes hysterical suggestions to the contrary in the Russian media (see EDM, April 5, 2018, January 27, 2021, February 18, 2021).

The days when Moscow could assume that its Caspian Flotilla was sufficient to counter any challenge are rapidly approaching their end, the military analyst suggests; and that makes that inland sea a potentially serious cockpit of conflict.