Russia’s new base on border with Tovuz: Goals and Objectives

We should not forget that Tovuz, Gazakh, and the territories to the west of Ganja are one of the most economically and socially active regions of Azerbaijan. 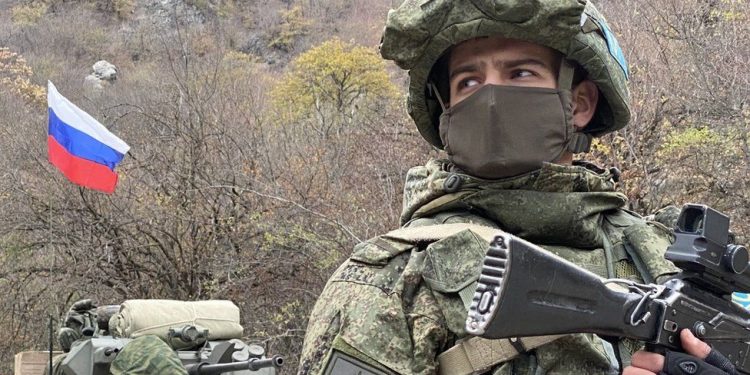 As the Armenian service of Radio Liberty recently reported, for more than a month, the Russian military base has been actively being built on the territory of the former airport near the village of Aygepar in the Berd district of the Tavush region of Armenia bordering Azerbaijan. According to the Armenian media, the construction is underway on the state-owned piece of territory on which, back in Soviet times, there was a runway for Yak-40 aircraft.

Local residents say there are Russians among the construction managers. This information has become another argument in favor of the fact that a certain military facility is being built for the needs of the Russian side. However, the main argument of the Armenian media is that on June 17, among the outstanding issues of the next meeting of the Armenian government was the issue of signing Protocol No.2 on amendments to the protocol “On the locations of the Russian military base on the territory of Armenia”. According to the text posted on the website of the Armenian government, due to the change in the addresses of the locations of the Russian military base located on the territory of Armenia, it became necessary to make changes to the composition of the land plots and real estate transferred to the Russian side, as well as to the documents that form the legal basis. This, simply put, means one thing – new Russian bases will soon appear on the territory of Armenia.

By the way, the village of Aygepar is literally one kilometer from the village of Alibeyli in the Tovuz region of Azerbaijan. In July 2020, this entire section of the state border became the scene of fierce positional battles that led to casualties on both sides and exhausted Azerbaijan’s patience on the eve of the 44-day Patriotic War in Karabakh. Nevertheless, despite the defeat of Armenia in Karabakh, the Tovuz direction remains strategically important for the Republic of Azerbaijan. The state border with Armenia in this section covers a relatively narrow railway and highway corridor to Georgia, which is of critical importance for the economic security of both Azerbaijan and neighboring Georgia. In addition, there are also oil and gas pipelines, which are significant in a broader geo-economic context.

We should not forget that Tovuz, Gazakh, and the territories to the west of Ganja are one of the most economically and socially active regions of Azerbaijan. This region is also densely populated – accordingly, there are a number of reasons why the topic raised by the Armenian service of Radio Liberty should be kept in the focus of our analysts.

And finally, the most important thing. The peace treaty with Armenia has not been signed yet. And judging by the results of the meeting held recently between the Azerbaijani Foreign Minister and his Armenian counterpart, the government of Nikol Pashinyan is set to continue procrastinating. At least the press release published by the Armenian side after the meeting said nothing about the peace process, but it once again mentions the OSCE Minsk Group. “The Armenian Foreign Minister reiterated the Armenian side’s view that the political settlement of the Karabakh conflict is essential for achieving a stable and durable peace in the region and in this context he stressed the importance of using the institution and experience of co-chairing the OSCE Minsk Group, in accordance with its international mandate”, this is how the Armenian media describe the results of the meeting. The purposes of the visit of the head of the US Central Intelligence Agency to Yerevan, unexpected and almost simultaneous with the meeting of the Armenian and Azerbaijani Foreign Ministers, also remain, to put it mildly, obscure.

Here the question arises – why now and what is the Kremlin preparing for? There are several versions. If we consider the question together with the topic of the so-called “Lachin corridor” road built by us on the liberated territories in Karabakh, it is possible that the Russian side is preparing this object of military infrastructure for the purpose of the possible relocation of its peacekeeping contingent from Khankendi, Aghdere, and Khojavand when their mandate expires. Because it would be very naïve to think that at the expiration of their mandate, the Russian contingent would simply leave the South Caucasus and return to the places of permanent deployment on the territory of the corresponding military district of the Russian Federation. There is a high probability that it will remain in the South Caucasus, namely, it will be redeployed to Armenia. There is still quite a lot of time before this deadline expires – about three years. Much can happen, especially against the background of the war in Ukraine and the literal chaos in world politics. However, the visit of the Russian ambassador Mikhail Bocharnikov to Shusha, however belated, but actively publicized, which also almost coincided with the meeting of Armenian Azerbaijani Foreign Ministers and Burns’ visit to Yerevan, may indicate the outlined agreements on this matter between Baku and the Kremlin.

On the other hand, it is obvious that Moscow will do its best to keep its military contingent in Karabakh in the coming years, as it is an important leverage point for the Russians on Baku and Yerevan. In that context, it cannot be ruled out that the construction of the military base near the most important transport and energy passages of the region will be a kind of element of pressure on Azerbaijan in the extension of Russian military presence in Karabakh, as well as in the issue of supplying energy resources to Europe.

Thus, the new Russian military base on the border with Tovuz will be, from a political point of view, multi-purpose. In the best-case scenario for Azerbaijan, it will be used for the redeployment of the peacekeeping contingent in 2025. At the worst, it will be a “bludgeon” raised over the region’s most important transport and energy junctions. However, as long as there are no specific details concerning the scales of construction, making further forecasts is a thankless job.