‘Frozen conflicts’ in Georgia and between Armenia and Azerbaijan could relapse into violence, but there is also an opening for a diplomatic reset. 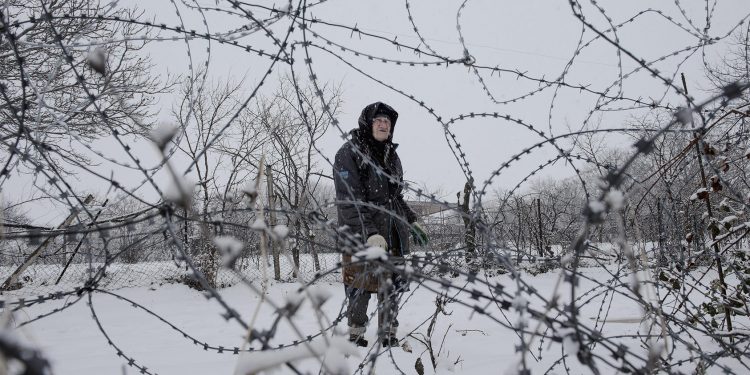 Valya Vanishvili, 85, whose home has been separated from the rest of the village by a Russian fence, in Khurvaleti, Georgia, on March 13, 2022. Russia invaded Georgia in 2008. To many Georgians, that means the country should stand unequivocally with Ukraine. “The Russians are doing to Ukraine what they did to us,” she said. (Laetitia Vancon/The New York Times)

Since Russia’s invasion of Ukraine, the world’s attention has been justly focused on the war and the devastation inflicted on Ukrainian civilians. However, as the war drags on — and becomes ever more costly to Russia — policymakers in the United States and Europe must pay increasing attention to other areas where the diminution of Russia’s military reputation may upset local balances of power. The greatest risk and opportunity from the decline in Russia’s credibility as a military power will occur in the so-called “frozen conflicts” in the South Caucasus: Abkhazia and South Ossetia in Georgia, and between Armenia and Azerbaijan over Nagorno-Karabakh.

The war in Ukraine simultaneously increases the danger that these frozen conflicts might relapse into violence and creates a window of opportunity for the United States and Europe to press for a diplomatic resolution to the conflicts.

The Limits of Russian Hard Power

Russia’s invasion of Ukraine has not gone to plan. The Russian Army has suffered extensive casualties and materiel losses. It has been estimated that Russia has lost 25 percent of the forces it assembled for the invasion. This means the Russian Army has likely taken upwards of 40,000 casualties and lost hundreds of tanks and aircraft among thousands of other combat and support vehicles. These losses have also been concentrated among Russia’s elite units, further compounding their impact on Russia’s military capacity. Altogether, this represents a significant degradation of the Russian military’s power projection.

It is hard to see how Russia can quickly rebuild these capacities. Russia does not have a strong system of trained reserves and instead relies largely on conscription to fill out the ranks. Stories of Russian casualties in Ukraine will only exacerbate draft dodging and make it less likely that conscripts will willingly sign the contracts that allow them to be deployed outside of Russia.

The Russian economy has also suffered extensive damage from Western sanctions, with many analysts assessing that it will take years for it to make a full recovery. This reality will diminish Russia’s ability to replace lost equipment in Ukraine and invest in upgrading capabilities that have performed poorly in combat. Sanctions specifically targeting the Russian defense industry will further exacerbate this issue, especially those restricting technology transfer to Russia.

Beyond this very real degradation of Russia’s hard power, there has been a pronounced decline in Russia’s perceived hard power. The entire world, including those areas where Russia has maintained political influence through the threat of military action, has seen the Russian military’s equipment failures, low morale and poor logistics. In almost every way, the Russian military has underperformed the pre-invasion expectations of foreign analysts against a supposedly weaker opponent.

Russia’s diminished ability to project power will significantly affect the “frozen conflicts” of the South Caucasus, where Russia serves as a patron and protector for separatist regions within the internationally recognized borders of Georgia and Azerbaijan.

In Georgia, Russia serves as the primary security partner for the self-proclaimed republics of South Ossetia and Abkhazia. Although the conflicts between Georgia and these regions date to the breakup of the Soviet Union, Russian involvement in the conflicts escalated during and after the 2008 Russian invasion of Georgia, which Russia justified as in defense of the two regions. Since the end of that war, Russia has recognized the independence of both and stationed thousands of troops on military bases in each region.

Russia’s direct role as a security guarantor for the separatist region of Nagorno-Karabakh is a more recent development. Russia has long been involved — both as an important diplomatic player and the primary supplier of weapons to both sides — in the conflict between Armenia and Azerbaijan over this Armenian-dominated enclave. It is only after a major escalation in fighting ended in 2020, however, that Russia deployed 2000 peacekeepers directly into Nagorno-Karabakh to monitor the cease-fire line and prevent any further advances by Azerbaijan.

The Russian invasion of Ukraine and subsequent poor performance there increases the level of insecurity for each of the separatist regions. While this increases the threat of renewed violence, it also presents an opportunity for the United States and Europe to push for negotiated solutions.

In Georgia, Russia has withdrawn troops from South Ossetia and Abkhazia to replace losses suffered in Ukraine. Russia has also sent local South Ossetian troops to the front in Ukraine. The Georgian government has so far taken a cautious approach to the war, despite calls from Ukrainian officials and Georgian foreign fighters in Ukraine to open a second front against Russia. Meanwhile, the de facto government of South Ossetia has called for a referendum requesting annexation by Russia, creating a flashpoint for potential escalation.

The opportunities for a diplomatic settlement in Georgia appear limited. The Georgian government does not seem interested in taking advantage of Moscow’s preoccupation with Ukraine while the signals from South Ossetian and Abkhazian authorities are not encouraging. Although Abkhazia has not followed South Ossetia in attempting to join Russia, it has expressed support for South Ossetia’s decision and quickly recognized the Donetsk and Luhansk “People’s Republics” in the early days of the invasion. However, depending on Russia’s performance in Ukraine, the situation may evolve in ways that lead to the Georgian government becoming more aggressive in responding to provocations by both breakaway regions.

The danger and opportunity caused by Russia’s declining hard power is most apparent in Nagorno-Karabakh. Violations of the cease-fire, especially by Azerbaijan, have increased recently despite Russian criticism. Azerbaijani officials have also sought to undermine and delegitimize the Russian peacekeeping force. With Russia distracted by the war in Ukraine, Azerbaijan may see conditions as favorable for forcing a final settlement of the status of Nagorno-Karabakh. The de facto government of Nagorno-Karabakh and its Armenian ally, meanwhile, feel quite insecure. This creates a danger of escalation to renewed conflict. With Russia loathe to redeploy troops from Ukraine to the region, Azerbaijan may take the opportunity to seize territory by force. Paradoxically, this might increase the chance for a diplomatic resolution if Armenia assesses that making concessions to achieve a negotiated settlement is preferable to the risk of a renewed Azerbaijani offensive.

Indeed, Armenia and Azerbaijan have already started negotiations under the auspices of European Council President Charles Michel. The European Union’s increasingly prominent role in resolving the conflict is also a consequence of the Russian invasion of Ukraine as the OSCE Minsk Group, which has been in decline since the 2020 conflict, is further hobbled by the breakdown of relations between the United States and Russia. The combination of Armenian Prime Minister Nikhol Pashinyan’s strong domestic mandate and a desire to end Armenia’s regional isolation — as evidenced by concurrent efforts to normalize relations with Turkey — also make this an opportune moment to pursue peace. Sustained engagement from the United States and Europe will be required to take advantage of this opportunity for a negotiated settlement and prevent a return to violence.

Russia’s invasion of Ukraine has been a seismic geopolitical event. While policymakers in the United States and Europe have taken steps to bolster European security, respond to the economic fallout of the conflict, and hold the Russian government accountable, they must also prepare to respond to the dangers and opportunities resulting from the degradation of Russia’s capacity to forcibly maintain the status quo in “frozen conflicts” in the South Caucasus.

In Georgia, this means remaining vigilant for opportunities to resolve the Abkhazian and South Ossetian disputes in ways favorable to Tbilisi. This will require continued, and perhaps increased, engagement with Tbilisi as well as concrete steps to strengthen the capacity of the Georgian Defense Forces.

Seizing the opportunity provided by the decline in Russian hard power to peacefully resolve these conflicts will not be simple or easy. There are, after all, reasons beyond Russian meddling that these conflicts were “frozen” in the first place. But if the United States can help resolve these conflicts now, it will limit Russia’s ability to create instability in this strategic area bridging Europe and the Middle East. The path to a resolution — and with it the chance for a better life for the people of the South Caucasus
— is open and, with deft and sustained engagement, peace is possible.