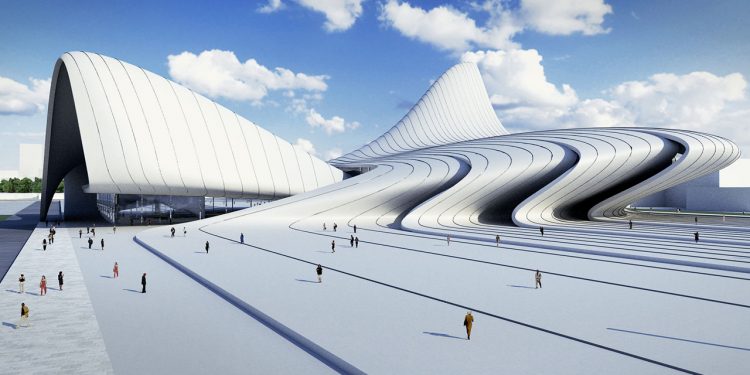 In the late 19th and early 20th century, illiterate people, who were made millionaires overnight by oil gushing in their yards, invited European architects to build houses for them. That is, despite their lack of education and the fact that they hadn’t even known the letter “A” in the word “architecture” until then, they approached this matter quite expertly. However, the new millionaires who appeared in independent Azerbaijan in the late 20th century, despite their education and relative knowledge of the world, disrupted the unique architecture of Baku with tasteless mansions and parks, whose appearance speak only of their owner’s deep pockets. What do you think the reason was? What changed?

That’s an interesting question. But I’m not sure if this is the right approach. Because even now the rich invite architects who can create very beautiful examples of architecture. Of course, this does not apply to everyone. We also see caricature-like houses. You know, architecture is first and foremost a combination of art and science. There is a very popular question: is art for people or for art? I must say that this question has lost its relevance. The question now is: is art for capital, or is capital for art? The overwhelming majority, who have turned consumption into a disease, will never find the answer to this question. Because to them, not art, but capital is fundamental. Basically, the class of people you are talking about, which emerged after the privatization period, puts image before comfort: “The bigger, the better.” Moreover, if we compare Baku with Paris, London, Vienna and say that “the city has a unique historical architectural style”, it will not be completely true. These cities have centuries-old, serious infrastructure planning. Likening cities to human beings, we could say that Baku is still young and spoilt, it’s bound to change and make mistakes all the time. We used to have a hard time drawing the skyline of our city, and this skyline has been taking shape for 10 years now.

Everything you see when you look out the window is part of the landscape. Landscape architecture is one of the most important factors presenting an architectural example. This kind of architecture is very difficult and at the same time the most entertaining. Because we are inspired by nature, we change or develop nature according to our cultural, social and economic conditions. One might say that the role of landscape architects in the preservation and further development of the existing ecosystem is indispensable. Now about our capital city. Landscape architecture is generally not taught at the undergraduate level in our country. Usually, when we talk about landscape architecture, gardeners, dendrologists and agronomists come to mind. This is not the case at all. That’s the main reason why we often see burning trees in the parks, and why the open-air space is so absurd. The mayor’s office makes very serious mistakes by entrusting civil engineers or architects with such projects.

There isn’t much interest in the minimalist style in our country, be it landscape architecture—parks and so on, or administrative or residential buildings. Minimalist tastes are still emerging. Is this process the same all over the world, or is it just our country? If it’s unique to us, it would be interesting to know your opinion on the reasons.

Minimalism is one of the most common styles. I can attribute this question to pure minimalism. This style of architecture is frequently used, especially in landscape design. Since minimalism is a new trend, it is understandably somewhat popular in our country now. There is a growing interest in this style, which develops under the “Less is more” slogan. Clients choosing this style are usually people who are tired of the bust work life, chaotic and dynamic lifestyle, and are looking for at least some monotony. It’s the reflection of the globalizing world and hypercapitalism in our lives that has made this style popular. Minimalism in landscape architecture is found mainly in the countries of the East. It should not be confused, however, with Japanese garden art. Designs based on a choice of one or two colors, or materials, and their shades, actually overshadow the Art Nouveau style. I believe that future architecture will be built on the foundations of minimalism.

In general, what style or design does a client in Azerbaijan, be it an individual or an organization, prefer in their future house, administrative building, office?

From my personal experience, I can say that clients are usually more inclined to the classical style. There is a very simple reason for this, as I said earlier. I don’t like the classical style at all, so I avoid it as much as I can. I can also say that one of the architect’s functions is to guide the client. You can’t put all the blame on the client. Sometimes they may be uninformed. In this case, the architect has to be able to defend the proposed concept. The client may also want a very absurd project. This does not mean that the architect must design it. As we have seen in our country, interior design is developing. We often see minimalist, modern, classical, neo-Gothic, I would even say Art Deco style. Unfortunately, I can’t say the same about exterior and landscape architecture. We are slowly realizing how important landscape is.

When slums like “Shanghai” and Sovetsky were demolished in Baku, many people expressed their regret, and photographers and directors didn’t leave those neighborhoods until almost the very last day. They claimed that a subculture was being destroyed. Were those neighborhoods really important in terms of history or local architecture?

There is a term, “neighborhood culture”. Unfortunately, this term can now be found only dictionaries. The emergence and collapse of neighborhood culture is an indicator of development. Strange as it may sound, it’s true. What I mean is architecture is inseparable from the economy. Yes, simple connections, such as warm neighborly relations, have become a luxury. By the way, just like in other countries, there are small suburban complexes in our country where the rich live. Urbanization, migration from the countryside to the city requires it. The neighborhoods that have been destroyed—rough as it sounds, I can say it was necessary destruction—were not objects of importance in the historical architecture of Baku. The ties between the people living in those neighborhoods, the good neighborly relations, the good memories were important only to two generations. I don’t believe that these slums, informal, chaotic constructions will be of any interest to the new generation. On the other hand, the rising skyscrapers look like the “headstones of the city”, don’t they?

It is often said that the skyscrapers, multi-story buildings and some administrative buildings built in the city after the oil boom disrupt the architectural structure of Baku. Is it so important to preserve that famous amphitheater architecture of Baku? Why shouldn’t it be or have been disrupted?

I don’t think so. The architectural structure of Baku is just beginning to take shape. The new skyscrapers will contribute to the skyline of the city. Urban branding is very relevant in our global world. This is a factor that directly affects the development of tourism. Architecture and technology are developing in parallel. In some occasions, it is a legitimate remark, and haphazard construction of residential buildings has a very negative impact on urban planning. But it is unfair to say that the newly built, especially modern, architectural examples—most of them administrative buildings of national importance—don’t make Baku beautiful.

Can you tell us a little about urban planning? What is it and how should it be implemented? For example, what I said in the previous question, I think, happened in the Soviet era, too. As far as I know, the standard Khrushchyovka, Stalinka or Leningradka projects are not particularly beautiful. The buildings that are being built now are at least colorful. So why is this a problem now?

Urban development, urban planning is a public service that prioritizes the benefits to society, providing reliable and sustainable living standards. Urban planning systematically researches, estimates and, most importantly, generates scenarios of the reasons for the existence of space, the dynamics of the economic, demographic, socio-cultural environment, using scientific sources. The main function of urban planning is to set city-related goals, influence the settlement process and manage change. Specialists in this field play the role of researcher, designer, leader, and teacher. We can’t look at Soviet-era residential buildings from an aesthetic point of view, mainly because urban planning prioritizes functionality, and those buildings are very functional—according to the ideological environment of that time. But in terms of planning, the Soviet Union was one of the states with the best urban planning experience in history. Zaha Hadid’s famous Heydar Aliyev Center design wrecked the solid, monument-like Soviet architectural tradition. This project was a very radical solution. I would also like to note that I think that infrastructure projects will be given priority in the liberated areas, destroyed cities and settlements. Because a healthy infrastructure is the backbone of the city.

In general, are the changes in the architectural appearance of Baku in recent years really as serious a problem as they are presented?

Not at all. This problem is not as serious, it’s blown out of proportion. This is part of a very natural process. Branding of the city is a requirement of the existing economic system. My view of these serious changes is entirely favorable. This inevitable metamorphosis is the fate of all megalopolises.

I would like you to talk about the styles and elements preferred in modern architecture.

The requirements of modern architecture are shaped by people’s needs. The economic stratification of people also creates stark contrasts between different types of shelter, one of our most basic needs. As I said before, a chaotic and very dynamic lifestyle pushes people to minimalism. The biggest reason for the rapid development of minimalism is capitalism. However, I have to say that the use of organic forms in modern architecture is becoming increasingly common. The main condition is that modern architecture should be sustainable, in harmony with nature, based on environmental factors, and meet people’s needs to the maximum. As for styles, it is impossible to speak about this in concrete terms. Some architectural styles become obsolete and forgotten over time. For example, the Gothic style, which was very popular in the past centuries, can hardly be seen in the projects being built these days.

That was the last question. Thank you for your time.