Snap parliamentary elections in Armenia: The position of the Armenian diaspora

Announced by Prime Minister Nikol Pashinyan in March this year, the snap parliamentary elections in Armenia have been a hotly debated topic both within and outside the country for several months. After the end of the Second Karabakh War, many in the Armenian diaspora actively opposed N. Pashinyan's candidacy, accusing him of betrayal and incompetence. 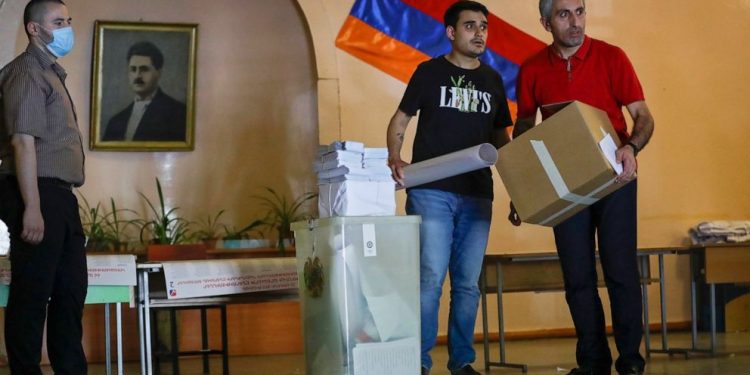 Some representatives of the diaspora refused to provide financial assistance to the Republic of Armenia unless Nikol Pashinyan resigned. The government was also accused of embezzling the funds raised by the Hayastan Fund. The ex-President of Armenia Robert Kocharyan, a member of the Fund’s Board of Trustees, said that he could not trust the government that “cynically deceived its own people about the real situation on the front lines” and did not believe the Prime Minister, when the latter said that the funds had been used for the needs of the people. However, according to Kocharyan, there has been no audit of the expenditure, therefore, there is no evidence of the embezzlement[1]. Some diaspora organizations, such as the Union of Armenians of Russia or the radical Dashnaktsutyun party, actively urged the Prime Minister to resign, while making various accusations against him. During his visit to Moscow, representatives of the diaspora also accused President Armen Sargsyan of betrayal and of not standing up for Robert Kocharyan during his trial[2].

Up until the election day, members of the diaspora living in different parts of the world called on the citizens of Armenia not to vote for Pashinyan and his team. During the Prime Minister’s visit to France, the diaspora Armenians greeted him with posters saying “Capitulator!” and criticized his intention to meet with President Emmanuel Macron because the French side allegedly had planned this visit for October. The French Armenians accused Pashinyan of using this meeting in his own interests before the elections[3]. And even after the results of the June 20th elections were announced, President of the Union of Armenians of Russia Ara Abrahamyan accused the authorities of falsifying the results, saying that “Armenia will face serious internal and geopolitical hardships.”[4]

According to the statement of the Armenian Revolutionary Federation, Dashnaktsutyun, prior to the elections, about 47 Armenian diaspora organizations came out in support of the Armenia Alliance group headed by former President Robert Kocharyan[5]. On June 11, 2021, Kocharyan held an online meeting with representatives of the Armenian diaspora living in the USA, Canada, Russia, the United Arab Emirates, France and so on. The main subject of discussion was resuming the inflow of investments from the diaspora, as well as establishing contacts between the diaspora and Armenia[6]. Shortly before the elections, Kocharyan also proposed forming a Ministry of Foreign Affairs and Diaspora in order to win the diaspora over. According to the ex-president, the agency would play an important role in the “interaction between Armenia and the diaspora.” At the same time, Robert Kocharyan made sure to mention that he had been the first to initiate major all-Armenian projects[7]. However, similar ideas had been voiced earlier by Nikol Pashinyan, who at some point even promised to ensure the repatriation of the diaspora to Armenia[8].

In his Twitter account, Alex Galitsky, Communications Director for the Western Region at Armenian National Committee of America, one of the largest Armenian organization in the United States actively maintaining contacts with most Congressmen and Senators, oddly enough, voiced his support of the pro-Russian candidate Robert Kocharyan, calling Prime Minister Nikol Pashinyan a populist demagogue. The tweet was soon deleted[9].

An organization called “Javakhk Diaspora of Russia” in its address to “compatriots” during a 12-day campaign expressed their “disappointment with the new government”, accusing it of inexperience and calling on all who had voting rights to vote for Robert Kocharyan’s Armenia Alliance[10].

During his visit to the Republic of Kazakhstan in June this year, Armenian President Armen Sargsyan had a meeting with the local Armenian community. Sargsyan made calls for the solidarity of Armenia and the diaspora, emphasizing the need to ensure the repatriation of Armenians holding high offices in other countries in order to participate in the political life of Armenia. Calls for national unity, as well as assurances that the fate of Karabakh still remained unresolved, made up the main part of his monologue[11].

The Armenian General Benevolent Union, who had previously called on Nikol Pashinyan to resign[12], offered its congratulations to the newly elected Prime Minister on his victory on the day after the elections, expressing the hope that this outcome would be the first step to “national healing” and to a fruitful interaction between Armenia and the diaspora[13].

This position of the Armenian diaspora stems from the revanchist sentiments that are widespread at the moment among its representatives. Thus, supporting the Armenia Alliance group headed by Robert Kocharyan, the diaspora organizations demonstrated their unwillingness to have peace in the region and to establish communication with Turkey and Azerbaijan. However, out of 455 Armenian citizens abroad who voted via electronic system, 163 voted for Nikol Pashinyan’s Civil Contract party, while 135 people voted for Armenia Alliance. The victory of the ruling party in the elections is a clear indication of the contrast between the views of the diaspora and the Armenian citizens. Expert Igor Korotchenko says that the election results testify to the desire of the Armenian citizens to live in peace and quiet, and the idea of ​​revenge is not very popular in the country. According to Korotchenko, representatives of the diaspora will not stop there and will continue to demand revenge, since they regard themselves as an independent political element[14]. Needless to say, this position of the Armenian diaspora can have adverse effects, putting obstacles on the path to the establishment of peace in the region.

Roza Asgarova, Advisor at the Center of Analysis of International Relations (AIR Center)

[1] The actions of the government seriously damage the reputation of the Hayastan Fund”, 16.03.2021, https://yerkramas.org/article/180809/iz-za-dejstvij-pravitelstva–serezno-stradaet-reputaciya-fonda-%C2%ABajastan%C2%BB

[2] “You are a traitor, too”: Armenians of Moscow responded to Armen Sargsyan, 28.11.2020, https://yerkramas.org/article/177134/tytozhe-predatel-moskovskie-armyane-otvetili-armenu-sarkisyanu

[4] The Union of Armenians of Russia: Armenia faces a new major crisis, 21.06.2021, https://yerkramas.org/article/183271/soyuz-armyanrossii-armeniyu-zhdet-novyj-bolshoj-krizis

[5] About 50 diaspora organizations from 20 countries of the world have supported Armenia Alliance, 18.06.2021, https://yerkramas.org/article/183188/okolo-50-organizacij-diaspory-iz-20-stranax-mira-podderzhali-blok-%C2%ABarmeniya%C2%BB

[6] Robert Kocharyan and the Diaspora discussed resuming the inflow of investment in Armenia (video), 13.06.2021, https://yerkramas.org/article/183081/robert-kocharyan-obsudil-s-diasporoj-vosstanovlenie-pritoka-investicij-v-armeniyu-video

[8] Every Armenian must have RA citizenship: Pashinyan on the need for repatriation, 23.09.2019, https://novostink.net/politics/269874-kazhdyy-armyanin-dolzhen-imet-grazhdanstvo-ra-pashinyan-vyskazalsya-o-neobhodimostirepatriacii.html#ixzz6yewanDrb

[11] There should be no walls between the Diaspora and Armenia, we should all live as one family – President Armen Sargsyan met with representatives of the Armenian community in Nur-Sultan, 06.06.2021, https://www.president.am/ru/pressrelease/item/2021/06/06/President-Armen-Sarkissian-met-with-Armenian-Diaspora-Kazakhstan/

[14] Igor Korotchenko: common sense won in Armenia, but the diaspora won’t give up, 21.06.2021, https://vestikavkaza.ru/news/igor-korotcenko-v-armenii-pobedil-zdravyj-smysl-no-diaspora-ne-sdalas.html