Turkish President Recep Tayyip Erdoğan and his Azerbaijani counterpart, Ilham Aliyev, signed an agreement on June 15, 2021, that may have historic significance not only for the two signatory countries, but also for neighboring states. 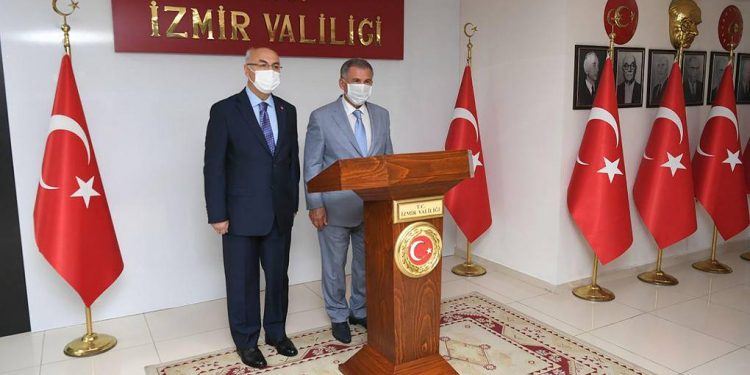 “The Shusha Declaration,” named after the Karabakh town where it was signed, inter alia aims to raise the long-standing military cooperation between the two countries to a new level while emphasizing Turkey’s commitment to Azerbaijan’s territorial integrity. Ankara and Baku agreed to work jointly on defense industry projects and pledged to assist each other in the event of a threat or attack by a third country (TRT World, Anadolu Agency, June 15). Other areas of cooperation include, according to the Azerbaijani president, “economic and trade relations, culture, education, sports, youth policy […] and the Southern Gas Corridor for Turkey, Azerbaijan and Europe” (President.az, June 15). “A new era starts today,” Aliyev proclaimed after the signing of the document, adding that the declaration elevates bilateral relations to the highest level (Dailysabah.com, June 15). Turkey’s already close ties with Azerbaijan will, thus, become even stronger; but the implications extend beyond this pair.

Analysts have written extensively about Turkey’s (and Azerbaijan’s) growing influence in the Caspian region and further afield (see EDM, February 18, 25, June 4) in the aftermath of last fall’s 44-day Second Karabakh War. Turkey derived a great deal of prestige from its supporting role in Azerbaijan’s recapture of the territory it lost to Armenia three decades ago, particularly its surprisingly advanced drone and electronic warfare capabilities. Although there are no Turkish military boots on the ground (at least for now), the country clearly managed to establish itself as an important power broker in the region. In analyzing Ankara’s growing clout, observers usually focus on its expanding influence on sovereign states in the South Caucasus and Central Asia. But this clout is also likely to stretch to ethnically close Turkic minorities in such countries as the Russian Federation. After all, Turkey already supports non-state actors in such far-flung places as the Central African Republic (Eeradicalization.com, June 4).

Russia is a home to a number of sizable Turcophone minorities. Volga Tatars, for example, number more than five million people and are the second-largest ethnic group in the country. Most Tatars, like Turks, belong to the Sunni Hanafi branch of Islam. “In Russia, up to 75% of respondents expressed a positive attitude to Turkey in the mid-2000s,” researchers point out (Ifri.org, May 2021); although the Turkish involvement in the Syrian conflict has since dented the enthusiasm of many Russians toward their southern neighbor. Still, Tatars appear to maintain favorable attitudes toward their Turkish cousins. Tatar elites, both secular and religious, have been accused in the past of pro-Turkish sympathies when they adopted a cautious stance on Russia’s sanctions against Turkey in the aftermath of Turkey’s downing of the Russian Sukhoi military jet five years ago (Regnum, December 22, 2015). But that can largely be accounted for by purely economic considerations.

Turkish companies have invested over $2 billion in Tatarstan, the republic’s President Rustam Minnikhanov said during his 2020 visit to Turkey (Anadolu Agency, October 16, 2020). “Today, ten Turkish factories are successfully operating in Tatarstan. The Consulate General of Turkey is successfully operating in Kazan. Our representative office operates in Istanbul. Kazan, Ankara and Istanbul are sister-cities. We are connected by regular flights between Turkey and Tatarstan,” Minnikhanov emphasized during an earlier visit. He also added that there are over 280 joint enterprises with Turkey (pravda.ru, August 19, 2017).

Smaller Turkic peoples such as the Balkars, Karachais, Kumyks and Noghais account for not less than 10 percent, and maybe up to 13 percent, of the population of the North Caucasus, which borders Azerbaijan. Most of them are proud of their heritage and view Turkey’s military and political achievements with admiration.

In recent decades, Chechens, the biggest ethnic group in the North Caucasus after the Russians, have, too, gravitated toward Turkey although they are not Turcophones. The international sanctions imposed on Chechen head Ramzan Kadyrov seem to be preventing him from visiting Turkey these days, but he remains a great fan of Turkish popular culture, especially its historical television series, one of Turkey”s biggest exports and an important international “soft power” tool (Tandfonline.com, April 16, 2021). Set in Ottoman times, these shows have helped launch a wave of fascination for the era among many Chechens. One of Kadyrov’s sons even played a part in Diriliş: Ertuğrul (Risen: Ertuğrul), a five-season epic about the beginnings of the Ottoman Empire, which was aired by the state-run TRT channel (Instagram.com, May 30, 2019). The Kadyrov government has also lobbied for the opening of a Turkish school and cultural center in Grozny (Vesti95.ru, May 17, 2014; Chechnyatoday.com, August 17, 2017; TASS, July 19, 2018). To date, for reasons unknown, that lobbying effort has not yet yielded any results despite positive signals from Turkish officials.

Turkey itself is home to about two million descendants of North Caucasus émigrés who found refuge in the Ottoman Empire after fleeing the 19th century Tsarist wars of conquest. Caucasian Turks are politically active, they exhibit strong civic culture, and they harbor deep-rooted grievances against Russia. One of the reasons why Turkey never extradites Chechen separatists, who settled in the country more recently, to Russia is the pressure from domestic Caucasian activist groups.

It has become something of a truism—and one difficult to dispute—to assert that a difficult and painful history taught Turks to fear Russia (The Atlantic, May 6, 2013). But it is also true that Turkey seeks cooperation with Russia in security matters, and the latter remains an important, albeit diminishing, trading partner for the country (Al Jazeera, August 27, 2020; see EDM, July 6, 2020). Turkey is changing fast and becoming increasingly assertive. In line with the article of the Shusha Declaration affirming the signatories’ shared commitment to the inviolability of recognized international borders and non-interference in the internal affairs of sovereign states, the Erdoğan government is unlikely to support any initiative Russia might view as destabilizing. Turkey has its own vulnerabilities with regard to minorities, primarily the Kurds. So, just as in Tatarstan, Turkey’s possible focus in the North Caucasus is likely to be on broadening its economic footprint (TASS, May 15, 2012; Rossiyskaya Gazeta, July 9, 2019; RBC, May 31, 2021), exporting its mass culture and education system, and offering religious training at its booming Islamic institutions. The North Caucasus, one of Russia’s poorest regions, would only benefit from such cooperation.