Soros’s love for the Karabakh Armenians…

From September 2020 to the present day, the Open Society Foundation (Soros Foundation) in Armenia has allocated more than $333,000 in the form of grants for 14 projects during the 44-day war and after it. 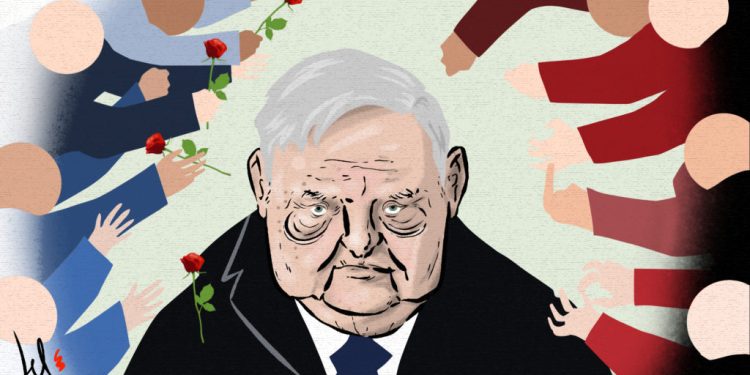 The real amounts are much higher, and the above figures are merely symbolic, designed to conceal the actual scale of the matter.

The total amount of the grants allocated by the Foundation to Armenia is certainly larger. These funds were allocated to projects aimed exclusively at “Karabakh Armenians” in Armenia and Karabakh. Information about these grants is publicly available on the organization’s website. A look at this list reveals some interesting points.

The Soros Foundation has been active in Armenia since 1997. So far, it has provided $63 million in grants for various projects covering education, healthcare, law, politics, finance and other areas. It is no coincidence that the Soros Foundation is claimed to have been behind the revolution that took place in Armenia in 2018. The press also regularly publishes lists of individuals associated with the Soros Foundation and holding important positions in the Armenian government. This list includes the Secretary of the Security Council, members of Parliament and some committee chairmen, ministers and heads of law enforcement agencies.

However, of the over $333,000 allocated to the Karabakh Armenians by the Open Society Foundation, only $112,000 was used for direct assistance to the people. Most of these funds, i.e., $134,000, was used to pursue a case against Azerbaijan, under the title of “Revealing violations of human rights and humanitarian law, collecting evidence of war crimes”. The rest of the funds were spent on organizing concerts in Karabakh, integration of Karabakh Armenians into Armenia and other purposes.

The fact that a significant portion of these funds were used for malicious purposes effectively shows that the intent was different than indicated.

The list below shows which organizations have received grants from the foundation, for which programs, and in what amount.

Musical Band of the Armenian Association of the Blind – $4,595

Center for International and Comparative Law – $27,000

Most of the organizations receiving grants are Armenian, but two stand out among them. One is Return to Hadrut and the other is Return to Kashatagh.

Awarding grants to organizations founded by those complicit in war crimes, illegal settlements and looting of property of Azerbaijanis also suggests that the goal is different than declared. The Open Society Foundation (Soros Foundation) openly supports Armenia’s territorial claims against Azerbaijan and creates illusions that could lead to further disasters for the Armenian population of Karabakh.