Tair Salakhov, painter who showed the severity of Soviet life, 1928–2021

When Nikita Khrushchev eased the great oppressions of Stalinism, one name to come in from the cold was Tair Salakhov. Paintings by the artist, who died last week, were always in a figurative realist vein, but possessed none of the required romanticisation of working life in Russia that was required of artists to thrive previously. 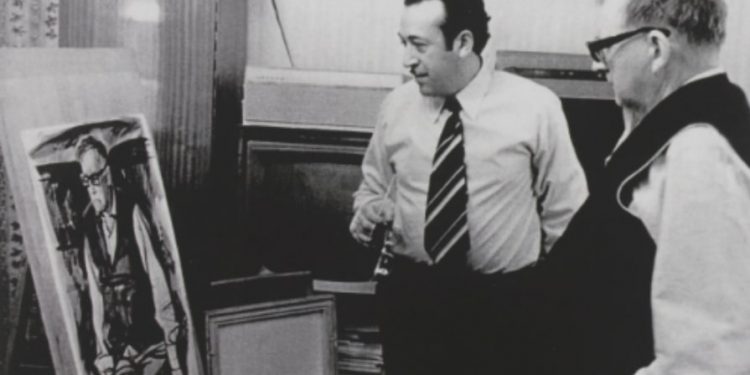 Having trained at the Azimzade Art College in Baku and then the Surikov Art Institute in Moscow, during the 1950s Salakhov was at the forefront of the so-called ‘severe style’ which showed workers and industry in gritty realism. For one series of works the artist spent three months in Salakhov spent three months in Neft Daşları, a settlement built in open sea off the coast of Baku in what is now Azerbaijan, and the site of the world’s first oil rigs. After Watch (1957) depicts several workers negotiating a wooden platform, ice looking waves lashing up the sides.

In 1960, without waiting for a commission, he produced the monumental painting To You, Humankind!, which shows two figures flying through space each holding forth great burning orbs. It was first shown at the Azerbaijan Republican Exhibition which opened in Baku on 11 April 1961. The artist did not know that the very next day the Soviet leadership would announce that Yury Gagarin had successfully completed the world’s first space mission.

In later decades Salakhov became best known for his portraits, as well as his scenes of urban life, but though they were frequently commissioned and featured the great and the good of Soviet politics and society, he refused to pander to vanities: Portrait of Composer Fikret Amirov (1967) saw the winner of the Stalin Prize sat on a bed, brooding. In Portrait of Rasul Rza the poet looks haunted, as does Dmitry Shostakovich, in a 1974 portrait. Both men suffered under Stalin, and critics have pointed that the works brings out the tragedy of Salakhov’s own life: in 1937 his father was arrested and executed.

Salakhov has said that among those making art at the time, ‘There was a strong undercurrent of opposition though few dared to express it openly.’ His own art was a careful negotiation of that political challenge. Art historian Alexander Rozhin claimed ‘Salakhov and the artists of his circle were both a creation of their time and a challenge to it’.

While his work was critical of the regime should one care to examine it carefully, during his lifetime he received state recognition including the Order of Lenin (1989), Order of the October Revolution (1976), People’s Artist of the USSR (1973) and the USSR State Prize (in 1968 for his portrait of composer Gara Garayev).

As perestroika (the political movement for reformation within the Communist Party of the Soviet Union) dawned in the 1980s, he was instrumental in bringing dozens of western artists to the Union, including Robert Rauschenberg and Francis Bacon. Today, in Baku, the artist’s former home and studio has become a museum.