The Taliban’s victory in Afghanistan has sparked concern in Central Asia and Russia that this development will generate refugee flows into both regions and that among those migrants will be members of radical Islamist groups who might mobilize extremist forces within the five countries of Central Asia and the republics of Russia’s North Caucasus, threatening the existing governments. 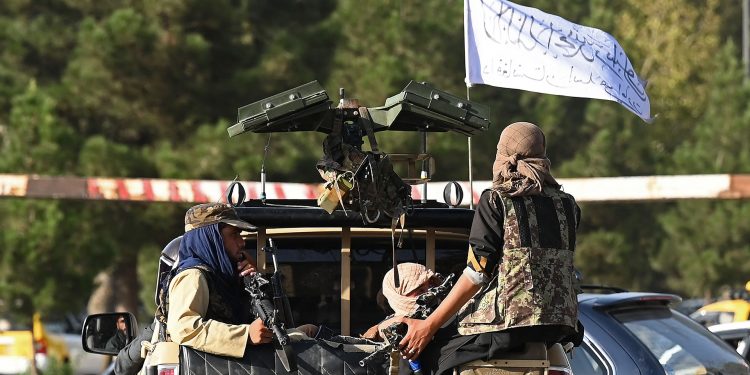 Taliban fighters in a vehicle patrol a street in Kabul on August 27, 2021, as last-ditch evacuation flights took off from Kabul airport on August 27, a day after twin suicide bombings on crowds trying to flee Taliban-controlled Afghanistan killed at least 85 people, including 13 US servicemen. (Photo by Aamir QURESHI / AFP)

Fears of that outcome in Central Asia have been especially great because of the proximity of the region to Afghanistan and because of the large number of co-ethnic communities along both sides of the border. Because Central Asian countries fear they are too weak to cope with such a challenge, they have indicated that they are not willing to accept refugees from Afghanistan and have played down the support they provided to anti-Taliban groups in the past (see EDM, August 17; Cabar.asia, September 3).

Trepidations in Russia are also high concerning the impact the Taliban’s return may have on the North Caucasus and, to a lesser extent, on the Muslim-majority Middle Volga. Many Russian officials fear that the Taliban victory will inspire Islamic extremist groups in these regions to organize attacks against Moscow. Or radicals representing the Taliban or others now defeated by them who came from Muslim areas of the Russian Federation might now return home and organize terrorist strikes. Moreover, officials worry that Taliban or Taliban-influenced activists are likely to work to promote drug trafficking throughout Russia to fill the depleted government coffers in Kabul. In contrast to Central Asia, Moscow has a far greater capacity to block the flow of radicals into its territory. However, the Russian government can do little beyond propaganda to limit how the Taliban victory may inspire Islamic extremists, especially in the North Caucasus (see EDM, August 19).

Meanwhile, on the southern side of the Caucasus Mountains, the Taliban or, more precisely, fears of Taliban influence may play an even more significant role. On the one hand, the countries of Armenia, Azerbaijan and Georgia have not faced a serious Islamist challenge in the past and thus would appear to have little to fear of the Taliban or refugees from Taliban-controlled Afghanistan. But on the other hand, these governments, unlike their Central Asian or Russian counterparts, have not blocked the flow of refugees from Afghanistan through them, and several of them have not been shy about advertising their support for anti-Taliban forces in the past. That stance could make them a target for extremist activity.

All three of the countries of the South Caucasus made much-ballyhooed contributions to the anti-Taliban coalition in Afghanistan—something they are not now in a position to deny in the ways Central Asian governments are (EurasiaNet, September 6; Mod.gov.ge, June 28; APA, August 27; Mod.gov.az, August 27; Nato.int, August 19). Moreover, Georgia has opened its airport in Tbilisi to be a major transit point for Afghans fleeing the Taliban. Russian propagandists have criticized this decision, insisting that some of these refugees will remain in Georgia and cause trouble there or in the neighboring North Caucasus While Tbilisi has vigorously denied Russia’s claim, the possibility of some extremist leakage from this flow cannot be excluded (Mfa.gov.ge, August 26).

As of early September 2021, there have not been any confirmed reports of Afghan refugees staying in any of these countries, let alone that those who might are Islamists bent on threatening the political order. But anxieties that this may happen are metastasizing. Armenian officials in the unrecognized, rump “Artsakh Republic” (Karabakh) inside Azerbaijan have not been shy in fanning such fears. David Babayan, the “foreign minister” of that entity, which is currently protected by Russian peacekeepers, has alleged that “Azerbaijan has transferred militants from Afghanistan to the portions of Karabakh it controls” to destabilize the area and threaten violence and that this process has been assisted by Turkey (Rossa Primavera, August 30).

According to Babayan, “[A]fter the Taliban took power in Afghanistan, part of the militants of al-Qaeda were rapidly shifted to the territory of the Artsakh Republic occupied [sic] by Azerbaijan.” This was done with Turkish aid so as to create “serious problems for Russia, Iran, [and] regional security and even represents a kind of control over Azerbaijan itself.” Given that Ankara wants to acquire as many levers over Baku as possible, it has created a threat to Azerbaijani controlled communities, the Armenian official says. This is because Ankara wants Baku to turn to Turkey for assistance. In short, Artsakh’s so-called foreign minister believes Turkey is creating a problem in order to exploit it.

While there is no evidence available to confirm Babayan’s charges, this logic may still resonate with Armenians and Azerbaijanis. Nine years ago, Russian media outlets pushed the narrative that Taliban agents had come to Armenia, sparking real worries of violence among its people. Armenian security officials denied this was happening at that time and suggested there was no way that the Taliban could send anyone besides trade representatives (Regnum, September 22, 2012; Siteua September 12, 2012). Despite that, many believed the Russian report. Consequently, many in the South Caucasus now fear the appearance of the Taliban and other extremist groups from Afghanistan or that local radicals could be inspired by the Taliban. And those widespread apprehensions are likely to drive the policies of their governments.