Tension escalated between Iran and its neighbor Azerbaijan over statements by President Ilham Aliyev, in which he criticized Iran’s military exercise near his country’s borders. 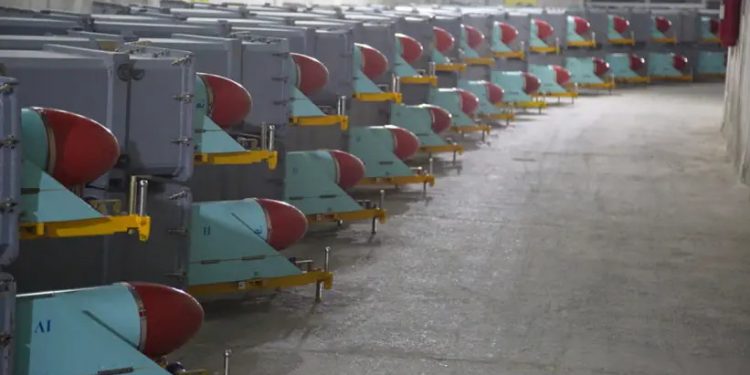 Iranian missiles are seen at an underground of the new "missile cite" of Iran's Revolutionary Guards naval unit at an undisclosed location in Iran (photo credit: IRGC/WANA/HANDOUT VIA REUTERS)

In an interview with Turkish Anadolu agency on the occasion of the first anniversary of Azerbaijan’s liberation of Nagorno-Karabakh from the 30-year rule of Armenia with the support of Turkey, Aliyev pointed to the military maneuver, which Iran recently carried out near the Azerbaijani borders, saying: “This is a very surprising event. Each country can conduct military exercises on its territory. This, of course, is its sovereign right. At the same time, analyzing this at a certain point of time, we see that this has not happened before.”

He continued: “Why now? Why exactly on our border? These questions are being asked by the Azerbaijani public, not me… They are also asking why no exercises were carried out in this region during the years of occupation? Why weren’t any exercises held when the Armenians were in Jabrayil, Zangilan and Fuzuli? Why are they being held after we have liberated our lands and put an end to 30 years of occupation? These are legitimate questions.”

In response to Aliyev’s statements, Iranian Foreign Ministry Spokesman Saeed Khatibzadeh said that the military maneuvers of the IRGC ground forces, which are conducted in areas bordering northern Iran, were a sovereign matter for the sake of peace and stability in the entire region. He warned that Iran “will not tolerate the presence of the Zionist entity (Israel) near its borders, and will take what it deems necessary for its security.”

In his interview with Anadolu, the president of Azerbaijan also commented on recent reports about Iranian trucks illegally crossing into the Karabakh region.

He said: “This is not the first time that Iranian trucks have entered the Karabakh region. This has happened several times during the occupation. These trucks went there on a regular basis, and we are aware of that. But, of course, there was no exact information, as accurate as the latest report. Taking this into account, we expressed our dissatisfaction to the Iranian side through various channels. But this process continued.”

“We hoped this would be stopped. However, from Aug. 11 to Sept. 11, about 60 trucks from Iran illegally entered Karabakh again. To prevent this, we already switched to specific action,” the president added, noting that his country installed customs and police checkpoints to control the road leading to Armenia through the territory of Azerbaijan.

“They also have to pay a duty. Don’t we pay a duty when we travel to a foreign country? We do. They are using the territory of Azerbaijan, so aren’t they supposed to pay?” He asked.