Each side has blamed the other for provoking these escalations, meaning that the real motives behind this latest round of hostilities were not immediately clear. 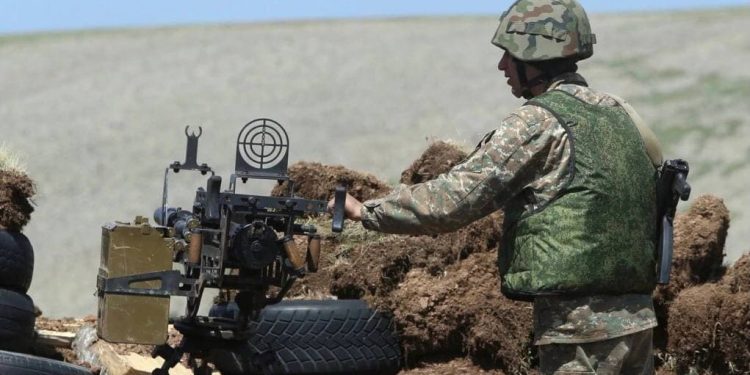 An Armenian soldier at an army post on the border with Azerbaijan (Source: Radio Free Europe)

On July 15, the Ministry of Defense of Azerbaijan reported that Armenia’s Armed Forces had attacked positions of the Azerbaijani Army in the direction of the recently liberated Kalbajar region (Mod.gov.az, July 15). The attack, conducted “using small arms,” was met with retaliation by the Azerbaijani side, which suffered no causalities as a result of the exchange, according to the ministry’s press release.

The incident came on the heels of a wave of armed escalations between the two militaries, first recorded on July 6 in the recently liberated Agdam region of Azerbaijan, following a period of relative silence between the sides. Armenian and Azerbaijani forces clashed again in the directions of Azerbaijan’s Tovuz (July 7), Gadabay (July 9), Nakhchivan (July 14) and Shusha (July 13, 15) regions (Mod.gov.az, July 6, 7, 10, 14, 14, 15).

Thus, the theater of hostilities covered both areas along the Armenian-Azerbaijani state border as well as territories of the Karabakh region, where Russian peacekeeping forces have been temporarily deployed under the trilateral (Armenia, Azerbaijan, Russia) ceasefire accord of November 10, 2020.

While Baku reported an Azerbaijani soldier wounded during the skirmishes in Agdam region, Yerevan’s Ministry of Defense announced that an Armenian soldier had been killed the following week in the fighting in the Yeraskh section of the Armenian-Azerbaijani border, along the northwestern section of Azerbaijan’s Nakhchivan Autonomous Republic (Mod.gov.az, July 6; Armenpress, July 14).

Each side has blamed the other for provoking these escalations, meaning that the real motives behind this latest round of hostilities were not immediately clear. Yet the armed confrontations amidst the post-war conflict-settlement negotiations—as well as the extension of the violence to territories ostensibly under the control of Russia’s peacekeeping mission—raise numerous questions concerning the existing situation on the ground. This uncertainty was further complicated by the information shared by Russia’s Ministry of Defense about the fighting in the vicinity of Azerbaijan’s city of Shusha. The Russian defense ministry notably did not release any statements about the violence registered during the first half of July in any of the other areas.

“On July 13, from 20:27 to 20:53, random shooting from small arms took place between units of the armed forces of Azerbaijan and Armenia in the area northwest of the city of Shusha. The incident was resolved by representatives of the Russian peacekeeping contingent. According to the statements of both sides, no victims due to the shooting are reported,” the bulletin of the Russian defense ministry declared (Mil.ru, July 14).

Hereby, Russia indirectly admitted its failure to ensure the withdrawal of the Armed Forces of Armenia from the Azerbaijani territories as agreed by the trilateral ceasefire deal signed, through Moscow’s mediation, to conclude the 44-day Second Karabakh War. The fourth clause of the deal affirms that “The peacekeeping contingent of the Russian Federation shall be deployed in parallel with the Armenian armed forces’ withdrawal” (President.az, November 10).

The wording of the Russian defense ministry’s statement regarding the exchange of fire around Shusha also effectively contradicts previous assurances from Armenian officials who, on various occasions, have denied the deployment of Armenia’s Armed Forces to the Karabakh region since the end of the war last November. For example, a recently published report of the International Crisis Group, citing the local Armenian authorities in the Khankendi (Stepanakert) region of Azerbaijan, asserts, “The troops manning the front line [in the Karabakh region] on the Armenian side are residents of Nagorno-Karabakh, with limited kit, under the command of the de facto government in Stepanakert. Yerevan, which had previously sent soldiers and armaments to the front lines, ceased doing so once Russian peacekeepers set up in the Lachin corridor” (Crisisgroup.org, June 9).

This situation has sparked anger and frustration in Azerbaijan with Russia’s peacekeeping mission in the Karabakh region, as most Azerbaijanis criticize Moscow for its failure to ensure the implementation of the November 2020 ceasefire document.

To the surprise of most observers, the Joint Russian-Turkish Center for Monitoring the Ceasefire in Karabakh, established under the trilateral ceasefire accord to “exercise control over the ceasefire” (President.az, November 10, 2020; see EDM, February 4, 2021), has yet to comment on the armed escalations between Armenia and Azerbaijan. For some Azerbaijani analysts, this might be due to a lack of agreement between the Turkish and Russian sides about the causes and nature of the clashes (Facebook.com/shahin.caferli, July 15).

Against the backdrop of this wave of clashes, the governments of Armenia and Azerbaijan appear to be at loggerheads also in other critical issues of their bilateral post-war agenda. In response to the consistent calls of Azerbaijani leaders for a peace treaty and therein recognition of each other’s territorial integrity, the Armenian side conditions this on first reaching an agreement on the status of the ethnic Armenians living in the Karabakh region—something abruptly rejected by the Ministry of Foreign Affairs of Azerbaijan (Mfa.gov.az, July 15). Baku, in line with the United Nations Security Council’s resolutions, considers Karabakh part of its sovereign territory and rejects any international negotiations about the status of this region (Trend.az, May 20).

The sides have yet to reach an agreement on the issue of the demarcation of the Armenian-Azerbaijani state border as well (see EDM, May 18). The Armenian side calls for the deployment of Russian border guards or other international observers on the border line in parallel with the “mirror withdrawal” of Armenian and Azerbaijani armed forces before the start of the demarcation and delimitation process “under international auspices” (News.am, July 15). Azerbaijan has not yet publicly responded to this proposal.

Amidst these disputes, the governments of Armenia and Azerbaijan have not resumed the negotiations on the reopening of regional transportation and communications channels. The negotiations were halted on June 1, ahead of the Armenian elections, when Yerevan announced the suspension of the Armenian-Azerbaijani-Russian working group, which was established during the January 11 trilateral leaders’ summit and tasked with presenting action plans (including implementation schedules) to their governments regarding regional railroad and highway projects (see EDM, June 16). Nevertheless, both Armenian and Azerbaijani officials have said that the trilateral negotiations had been “constructive” and have declared their desire to resume talks within that format (Trend.az, June 23; Armenpress, July 15). It remains to be seen whether these political interests are not subsumed by growing mistrust caused by an uptick in violence between both sides.