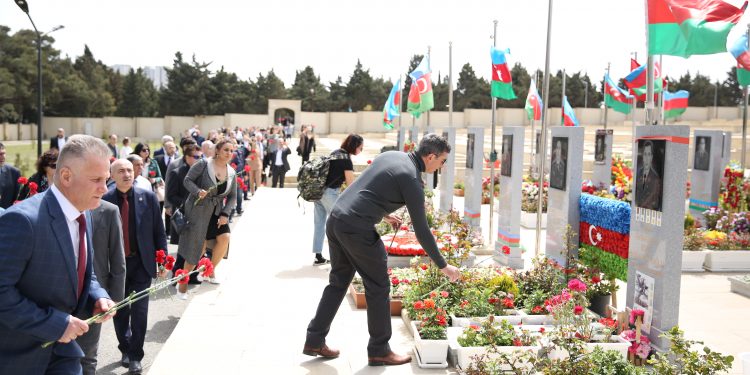 We, the participants of the Congress representing Azerbaijanis living abroad, are delighted to convene the V Congress of World Azerbaijanis in the cultural capital of the Republic of Azerbaijan.

The decision to hold high-level forum in the city of Shusha after the glorious victory in the Patriotic War is itself a historic event of great importance in the life of every Azerbaijani in the world. High-level organization of the event and provision of opportunities to World Azerbaijanis to exchanges opinions on vital issues should be highly appreciated. We express our deep gratitude to the President of the Republic of Azerbaijan, the Government of Azerbaijan and everyone who made a great contribution to the preparation of the congress thus enabling us to seize this opportunity.

For the past six years since the last Congress serious alterations were made in social and political life of Azerbaijan, presidential, parliamentary and municipal elections were held. During 2018 presidential elections Azerbaijan people voted for a worthy successor to the political line of Heydar Aliyev, thereby demonstrating once again their support for the political line held from 2003. Being granted mandate from the people, Mr Aliyev declared a new stage of economic and political reforms, meanwhile strengthening the army, thus preparing for the crucial step in liberating our lands occupied by Armenian forces. The result of this successful policy was restoration its territorial integrity in a period of 44 days, complying with the Security Council resolutions, bringing to an end to the longing of our people who found themselves in the situation of internally displaced due to the occupation from Armenia for their homeland.

Azerbaijan people during Patriotic War have demonstrated again to the world being peace-loving nation, that respects the norms of international law. Despite the fact that during the war Armenian forces shelled civilian objects, residential buildings and civilians in Ganja, Barda, Tartar, Aghdam, Mingachevir and other Azerbaijani cities located far from the front line and killed more than a hundred civilians, the Azerbaijani army has never targeted civilians and residential objects both on the territory of Armenia and on the territories of Azerbaijan occupied by Armenian forces.

Socio-political activity of our compatriots living abroad has soared during the last years thanks to the attention and solicitude provided by the State, strengthening ties to their homeland and consolidation their unity around ideology of Azerbaijanism, founded by national leader Heydar Aliyev. Solidarity of Azerbaijanis living abroad has reached an unprecedented level, both during the COVID-19 pandemic and after the provocation committed by Armenia in the direction of the Tovuz region of the state border with Azerbaijan, and during the Patriotic War. Our compatriots abroad demonstrating national unity, supported our country by sending humanitarian aid to the army, wounded soldiers, families of martyrs, civilians who were wounded on the frontline territories and whose homes were destroyed and showed high-level of organization and commitment conveying of our true voice to the world.

During the last period Azerbaijani state has successfully pursued rational national policy, tracing back to the interests of the society, achieved development of environment of ethnic and religious tolerance, provided basis for truly civil solidarity.

Thus, despite ethnic and religious adherence, each citizen loves Azerbaijan equally and considers it his or her sacred duty to serve Azerbaijan. Clear evidence for this will be the fact that majority of national minorities who immigrated abroad keep in touch with their homeland, support all endeavors related to the protection of the interests of our nation.

Azerbaijan Republic, pursing multifaceted and well-balanced policy, continues consistent efforts in building friendly relationships with all countries based on generally accepted norms and principles of international law, such as respect for sovereignty and territorial integrity, inviolability of borders and non-interference in the internal affairs. Exactly on those pillars our government, that based relationships with other countries, has obtained trust of international community, was elected as a Chairman of the Non-Aligned Movement that unifies more than 120 countries around the world and in the meantime successfully continues its work in that status.

During the previous period military capacity of Azerbaijan Republic has increased by providing military forces with the most modern equipment. Today Azerbaijan army has a capacity to tackle with such tasks like defending national independence, restoration of the territorial integrity and ensuring control over all territories.

Azerbaijan successfully fought against COVID-19 and measures taken in the sphere of population safety, endeavors made by our country on the international level, practical steps taken by, were highly praised among international community.

Taken into account all mentioned above The Fifth Congress of world Azerbaijanis decide:

1) The work done since the last Congress of World Azerbaijanis aimed to defend rights and freedoms of Azerbaijanis living abroad, promoting the ancient history and rich cultural heritage of our people, conveying the Azerbaijani realities to the world community, establishing ties with public and political circles of various countries should be considered satisfactory.

2) The importance of the historical victory won by the Azerbaijani Army in the Patriotic War under the leadership of Victorious Commander-in-Chief Ilham Aliyev, the merits of martyrs and veterans who gave this victory to Azerbaijanis all over the world should be emphasized.

3) The World Azerbaijanis highly appreciate the achievements made by the independent Republic of Azerbaijan over 30 years in various fields, fully support the domestic and foreign policy of the Azerbaijani state.

4) The Congress considers it necessary to emphasize once again that the independent Republic of Azerbaijan is the moral support of all Azerbaijanis, the representative of national and cultural interests, regardless of where they live in the world. The protection of the territorial integrity of Azerbaijan, the prevention of aggression against the independent republic in any form, from inside or outside, its development and strengthening as a secular, legal, national state is a sacred matter not only for the citizens of the republic, but also for our compatriots living in different countries of the world.

5) Recommendation to the diaspora organizations:

– continue the process of concentration in order to coordinate implementation of the activities of diaspora organizations;

– enhance even more the collaborative activities of Azerbaijani and Turkish diasporas;

– take measures coordinated with certain governmental administrations of Azerbaijan Republic to deliver facts related with looting, appropriation of national cultural heritage and destruction of historical monuments of Azerbaijan people on lands occupied by Armenian forces and historical territories of Azerbaijan located in Armenia during 30-year period;

6) The Congress recommends the Editorial Board generalize the opinions and proposals expressed and submit them to the certain public administrations and diaspora organizations of the Republic of Azerbaijan.

7) The Congress requests The State Committee on Work with Diaspora to provide participants with a separate book based on the materials from the Congress of World Azerbaijanis.

8) The Fifth Congress of World Azerbaijanis addressing to all Azerbaijanis in the world encourages them to mobilize their efforts and abilities in the name of national interests to rally more closely around the independent Azerbaijan.

Resolution of the Fifth Congress of World Azerbaijanis was adopted on