Probably most of us have asked ourselves this question. “Why do the Armenians hate us so much?” The answers may be different, but I believe we should not ignore one issue, which is quite important for the Armenians: to them, we CONTINUE the great obstacle on their road to the Greater Armenia. 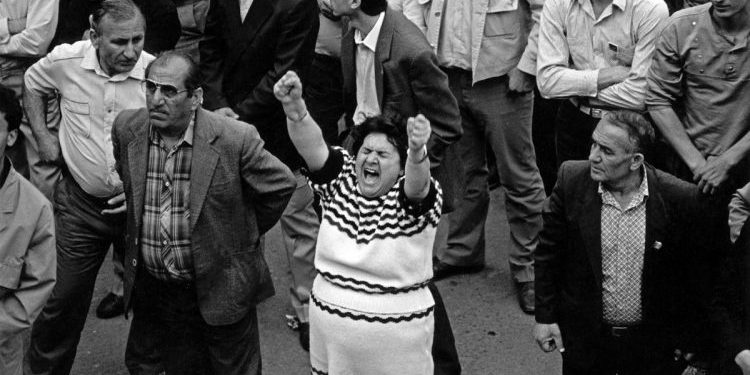 Thus, an in-depth look at the historical events shows that the territory of the Armenian state, including the South Caucasus, is part of their irredentist policy. Their main “historical” lands are located in eastern Anatolia. Still, the Armenians have been unable to establish a state as large as they thought (not even the lands in Anatolia), but they did manage to establish a state called Armenia in the South Caucasus, which cost—and continues to cost—the Azerbaijanis dearly. The reason is plain and simple: Azerbaijan and Azerbaijanis have been a serious obstacle to the establishment of their “great historical” state.

According to Armenian historiography, proto-Armenian tribes living on the Armenian plateau united to form a state around Lake Van. This state was even so powerful that it fought Assyria for the Fertile Crescent. Later, with the strengthening of the Achaemenids, these lands were occupied by the Persians and the Armenian satrapy was established. Alexander the Great defeated the Achaemenids in the Battle of Gaugamela and restored the Armenian kingdom. During the reign of Tigranes II or Tigranes the Great, the territory of the Great Armenian Kingdom spread over a wide geography: eastern Anatolia, northwestern Iran, present-day Syria and Lebanon, most of the South Caucasus (up to the Caspian Sea) were part of this kingdom, thus “becoming” historical Armenian lands.

Although they became vassals of the Roman Empire in the 60s BCE, the Armenians preserved internal governance and became one of the centers of conflict between the rising Sassanid Empire and the Roman Empire in the third century CE. By declaring Christianity the official state religion in 301 CE, they claim to have gone down in history as the first “nation” to adopt this religion. Finally, in 387, the Armenian kingdom was divided between the Sassanids and the Romans, western Armenia coming under Roman control and eastern Armenia under Persian control. After that, the Armenians were not able to establish a state again until 1918.

If we were to believe all this, the Armenians are the indigenous population of Anatolia and the masters of the South Caucasus. History, however, kept turning so that they were unable to establish a state for many centuries. The main reason for this is that each period had great powers of its own: the Sassanids, then the Arab Caliphate, the Byzantine Empire, the Turkic states, the Ottoman Empire and so on. As a result, the Armenians were no longer able to establish a state and begin to live scattered across a vast territory, although unlike the ten lost tribes of Israel, Armenians continued to live in Anatolia, Iran, and to a lesser extent in the South Caucasus. Most Armenians lived in the Byzantine-Ottoman lands.

At the beginning of the 19th century, as a result of the wars between the Russian and Iranian empires (as well as the Russo-Ottoman wars) for the South Caucasus, the mass resettlement of Armenians to the South Caucasus began. A number of Armenians were settled mainly in the territories adjacent to eastern Anatolia: in the regions of Irevan, Nakhchivan and Karabakh, that is, in the territories of “Eastern Armenia”. The consequences of this placement would be revealed about a century later.

The main events took place against the background of the weakening of the Ottoman Empire and nationalism, which had been growing since the beginning of the 19th century. Thus, as early as in the first half of the XIX century, the Balkan peoples either gained independence or forced the Ottomans to grant them the right to self-governance—the first stage of independence. Of course, the support from the great powers of Western Europe, as well as Tsarist Russia, should be emphasized here. Nationalism and the idea of ​​separating from the Ottomans and establishing their own independent state did not go unnoticed by the Armenians, also known in the Ottoman Empire as “Millet-i Sadika” (“loyal nation”). In particular, in the late 19th century, the Armenians, who became more active and organized, chose the bloody path of separation from the Ottomans and becoming independent. In the 1890s, armed Armenian groups began to carry out major massacres in eastern Anatolia, aiming to build a “Muslim-free” Armenia. As a result of Abdulhamid II’s strict control over the issue, this attempt was almost thwarted, at least until World War I.

Irredentism, the characteristic of that period, found its place in the formation of the national consciousness of the Armenians. That is, the restoration of “historical” territory and the dream of building a national state there had already been accepted at the national level, and work began in this direction. In 1914, the Armenians, who could have joined the Ottoman Empire in World War I and fought on various fronts, began to stir again in eastern Anatolia and attempted for a second time to make the dream of the Greater Armenia come true. Once again, the Muslim population of Anatolia was mass murdered, subjected to ethnic cleansing. The Ottoman Empire needed to resolve the internal/separatist problem supported by the outside forces, especially by the Russian Empire. The solution came from Germany: exile. Attacks on Armenian militants were inevitable in order to prevent massacres, as well as to protect the security of eastern Anatolia’s borders and ensure internal order. However, the struggle did not stop there, and the proposal to exile the Armenians was implemented. As a result, the plan to establish an Armenian state in Anatolia was thwarted, the Anatolian part of Greater Armenia—Western Armenia—was lost, and what remained was Eastern Armenia.

The collapse of the Russian Empire in 1917 encouraged the nations of the South Caucasus to build an independent state. Thus, in May 1918, Georgia, Azerbaijan and Armenia declared the establishment of independent republics. However, for the “Eastern” Armenians, the territory was still small, that is, they did not have a say even in the matter of territory they dreamed of. Therefore, they made territorial claims against both Azerbaijan and Georgia. At the same time, they wanted to restore their state in the “historical” Armenian lands, through massacres and ethnic cleansing carried out by scattered armed groups in Irevan, Nakhchivan and Karabakh.

Despite the declaration of independence of the Azerbaijan Democratic Republic in May 1918, Baku was still under occupation. The Azerbaijani government, which asked the Ottomans for help, received a positive response, and the Islamic Army of the Caucasus, led by Nuri Pasha, arrived in the South Caucasus. At the same time, Kazim Karabekir Pasha settled in Nakhchivan with his army and took control of the region. With the liberation of Baku and the capital of the republic moving there, and the restoration of internal order, the Armenian plan of the Armenia in the South Caucasus did not come to fruition. However, according to the documents in the Ottoman archives, it can be said that between 1918 and 1920, the Armenians continued their aggression against the civilian population in the regions of Irevan, Nakhchivan and Karabakh, becoming a serious headache for the Republic. In short, the Azerbaijan Democratic Republic, with the help of the Ottomans, thwarted the plans of the Armenians and prevented a third attempt to establish the Greater Armenia, this time not in Anatolia, but in the South Caucasus. This was not the end. The Soviet empire supported their voice.

Since one of Russia’s first plans as it was establishing a Soviet state was the South Caucasus, it immediately ended the independence of all three newly independent states in 1920 and made them part of the Soviet empire. With the establishment of the USSR, the Armenians slowly began to act on their plans and managed to annex the Irevan region and Zangezur into their territories. Due to the special status of Nakhchivan, these territories could not be included in the Armenian SSR. Although the attempt to unite Karabakh was not fully successful: they gained the right to self-governance—the Nagorno-Karabakh Autonomous Oblast was created. On the eve of the collapse of the USSR, the struggle for historical lands intensified and plans were made to unite with Armenia. Since the course of subsequent events is clear to everyone, I will stop here.

Thus, although the seeds of the Armenians’ plans to build a Greater Armenia (national) state from sea to sea sprouted in the Ottoman Empire in the 19th century, they were able to establish one part of their “historical” state under the name of Armenia only in the South Caucasus with the Russian patronage. The Ottoman Empire first thwarted their state-building plans in 1894-96 and again, in 1914-15. In 1918, Azerbaijan again, with the help of the Ottomans, thwarted the plans of the Armenians for the third time (delaying this issue for at least 2 years). Later, in the early years of the USSR, they acquired some of the lands they had wanted and dreamed of as their official territory and were able to annex them to their state borders.

A nation that still yearned for the lands “remaining” in eastern Anatolia but knew that it would never happen, naturally appreciated the opportunity and chose the path of separatism again on the eve of the collapse of the USSR. It tried to take Nagorno-Karabakh away from the Azerbaijanis, citing the “millennia-old” history, and again, with the support of Russia, at least partially achieved its goal. Therefore, although they cannot build the Greater Armenia of their dreams (as long as Turkey remains a strong state), the Armenians want to add new “historical” territories to what they have been able to build so far. This is possible only in the South Caucasus, and, unfortunately for them, the main obstacle here is Azerbaijan and Azerbaijanis (according to Armenians, Turks). As a result, they tried/are trying to take revenge on the Republic of Azerbaijan, the successor of the Azerbaijan Democratic Republic, the revenge they failed to take on Turkey, the successor of the Ottoman Empire. They perceive the majority of the Azerbaijani population as Turks, so they call us Turks, not Azerbaijanis. As exemplified by the Ottomans, the Turks, as a nation, are the eternal enemy of the Armenians, those who crush their plans of Greater Armenia. Therefore, the anger and resentment of the Armenians against Azerbaijan—a state and a nation with a vast majority of Turkic population—persist, and this animosity will probably last a long time.