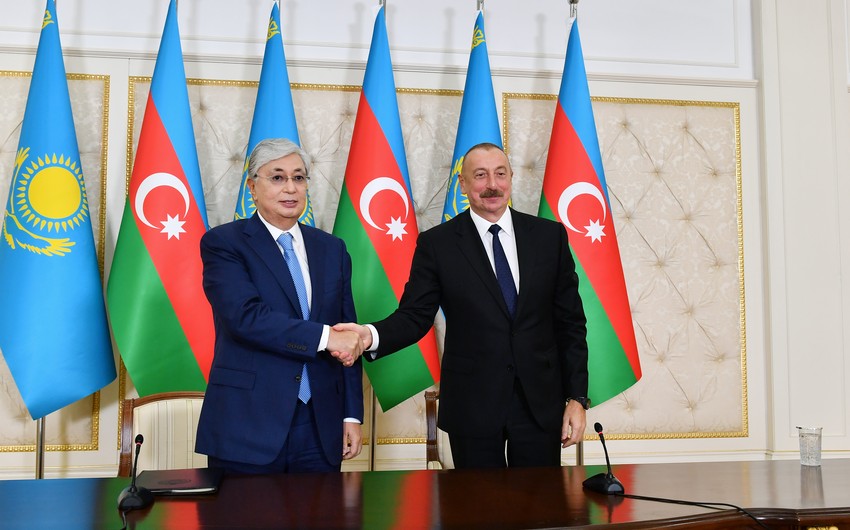 The common Turkic roots show themselves and call for a new level of strategic ties between the two states. Especially now, when there is a new reality in the world.

Up to a certain point, the two states, as the leaders of the South Caucasus and Central Asia, were only planning to deepen their cooperation. But this is a long process that requires careful planning, so neither was rushing into it. Everything began to change after Azerbaijan’s brilliant victory in 2020, as a result of which international logistics took on an entirely different and more favorable form for Kazakhstan.

But the real turning point for Kazakhstan was February 24 of this year, when yesterday’s “reliable partner”, with whom the country had a “special relationship”, turned into an aggressor and an international schemer overnight, willing to bring down out of the blue the relations that had been shaped over many years. After the affair with the Caspian Pipeline Consortium, which was alternately closed and opened, as dictated by the degree of Moscow’s dissatisfaction with Kazakhstan’s official position on Ukraine, the Kazakh authorities realized that they simply could not delay the diversification of energy transportation routes any longer.

Tokayev still tried to negotiate with Putin, but realized that an agreement was impossible here, as the political price that the Kremlin had named for the uninterrupted operation of this route would be too high. Even the Kazakh president’s promises that his country would suspend the investigation into the northern neighbor’s role in the January events failed to impress the Kremlin, as the latter believes it was in its right.

That is why it became very clear for Tokayev and Kazakhstan’s elites that moving forward was possible only together with Ankara and Baku, hand in hand, with the participation in the forming Turkey-Azerbaijan-Central Asia axis in mind. Moreover, and this is important, Kazakhstan’s decision was not forced and made under the pressure of circumstances. It would have happened anyway, but in the new reality it happened sooner than expected.

Ilham Aliyev is certainly a brilliant geopolitical player. One can count the likes of him on the fingers of one hand in the world today. Together with Erdoğan he is boldly reshaping the traditional schemes of checks and balances by involving unconventional players in his international projects.

Today they are successfully shaping the Ankara-Baku duo into a quartet with Kazakhstan and Uzbekistan. With an eye toward China, who gets from this configuration the much-desired non-standard access to the European, and not only European, markets.

The motivation behind the new geopolitical axis is flawless: common Turkic roots, rich historical and cultural ties, the similarity of languages and mentality. In the current circumstances, this is an ironclad foundation for a strategic partnership, which the opponents of this axis understand perfectly well, because it is no accident that Armenians lost their composure over Kazakhstan’s decision to give Azerbaijan the Center for Children’s Creative Development to be built in Karabakh.

With this gesture, the President of Kazakhstan is saying openly: we share a common historical destiny. We share common roots, tribulations and victories. Therefore, we are destined to walk together with Baku. Towards new heights for the good of the two countries and the Turkic world. And Ilham Aliyev has done his best to make sure that this call comes from Kazakhstan.