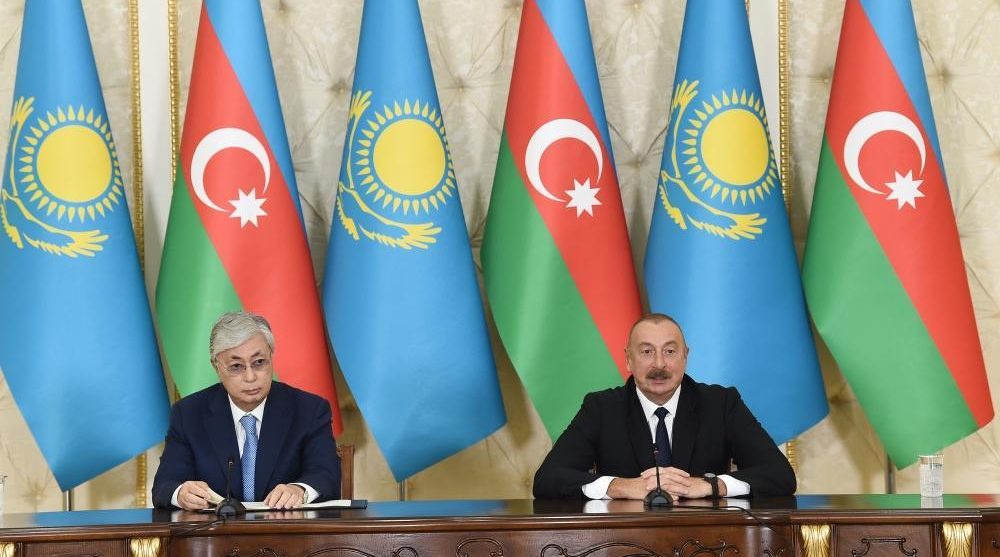 Aliyev and Tokayev understood each other perfectly

Celebrating this year the 30th anniversary of the establishment of diplomatic relations, the two brotherly states set a goal to bring bilateral trade and economic relations to a new level, expand cooperation in transport and energy spheres and significantly increase turnover in the medium term. An important step for the expansion of economic and humanitarian cooperation between the two countries was an official visit of the President of Kazakhstan Kassym-Jomart Tokayev to Azerbaijan held yesterday.

This year was a landmark year for the expansion and deepening of trade and economic relations between Azerbaijan with Central Asian countries, especially with Kazakhstan, a key partner in business and transport projects. Positive trends began to dominate late last year when several summits and ministerial meetings of the member countries of the Organization of Turkic States developed a long-term road map to promote transport, business, and investment integration of the Central Asian region with Azerbaijan and expand preferential trade relations with Türkiye. At the same time, the Russian-Ukrainian war and the associated Western sanctions that broke the traditional transport and logistics routes between Central Asian countries and Europe played the role of a trigger, prompting a considerable increase in participation in the transit alternative of the “Middle Corridor.”

With regard to Kazakhstan, these negative conflicts were most acutely manifested in the repeated suspension of operation of the marine terminal of the Caspian Pipeline Consortium (CPC) located in Novorossiysk. The CPC, with a throughput capacity of 67 million tons of feedstock per year, is of enormous importance for Kazakhstan since about three-quarters of all Kazakhstani export oil is delivered through this 1,511-kilometer pipeline, mainly from the Tengiz and Kashagan fields. Under such circumstances, Kazakhstan’s desire to expand as much as possible the transit of energy resources through the territory of Azerbaijan to Georgian ports and the oil terminal in Ceyhan is quite justified.

Meanwhile, the anniversary date – the 30th anniversary of diplomatic relations between Kazakhstan and Azerbaijan was marked by a number of governmental visits, business, and humanitarian forums, including the 18th meeting of the Azerbaijani-Kazakhstan intergovernmental commission on trade and economic cooperation held in July. It was during this period that the friendly states began preparing a comprehensive program of cooperation until 2026, as well as the formation of the Business Council Kazakhstan – Azerbaijan, which is a platform designed to strengthen the dialogue between business circles of the two countries, to enhance trade, economic and investment cooperation in the non-oil sector, as well as on the untapped potential of regional industrial integration. In general, these trends have been developing quite successfully in recent years. The countries have an extensive treaty-legal base numbering over 120 interstate and intergovernmental agreements, and at the same time, according to the Central Bank of Kazakhstan, in 2005-2020 the volume of attracted investments in the Kazakhstani economy amounted to $306.5 million. In turn, the volume of investments of Kazakh companies in the Azerbaijani economy has increased in recent years: only in 2018-2019 $75.7 million was allocated. In the post-pandemic period, even greater growth of trade turnover between the countries was outlined: in 2021 it was $300 million, having more than doubled compared to the crisis year of 2020 ($140 million). However, it is clear that the current level of trade does not fully reflect the economic potential of the countries, and since last year the governments have been working to maximize the expansion of business ties and diversify their structure, including through the growth of investment cooperation.

The logical continuation of the efforts made in the last period was the official visit of Kazakh President Kassym-Jomart Tokayev to Azerbaijan, during which fruitful bilateral talks were held with Azerbaijani President Ilham Aliyev, as well as meetings in the extended format, where a number of Azerbaijani-Kazakh documents were signed. “I am glad to visit Azerbaijan for the first time as President of Kazakhstan on an official visit. As a result of today’s talks, a number of agreements were signed, and I am sure they will bring bilateral business cooperation and interstate relations to a qualitatively new level,” President Tokayev said.

In particular, the leaders of the two countries signed the “Declaration on strengthening strategic relations and deepening allied cooperation and the Integrated Development Program of Cooperation between Azerbaijan and Kazakhstan for 2022-2026.” Among the agreements aimed at deepening bilateral business cooperation, there was also an intergovernmental agreement on trade and economic cooperation, as well as three memorandums – on mutual understanding on cooperation in information and communication technologies, on cooperation in the field of transport, on cooperation in the field of transit traffic, on the establishment of the Kazakh-Azerbaijani Business Council. The sphere of diplomatic, cultural, and humanitarian relations was not ignored either. In this sphere, it is worth mentioning the plan for cooperation between the foreign ministries of Azerbaijan and Kazakhstan for 2023-2024, the program on cultural cooperation for 2022-2025, the protocol on the establishment of partner relations between Shusha and Turkestan and between the cities of Mingachevir and Uralsk. A memorandum of understanding was also signed between the Ministry of Information and Social Development of Kazakhstan and the Media Development Agency of Azerbaijan.

The first meeting of the Kazakh-Azerbaijani Business Council was also held as part of the visit of the President of Kazakhstan, where agreements were signed between the state agencies of the two countries and agreed on several specific business initiatives. In particular, agreements on cooperation were concluded between the Foreign Trade Chamber of Kazakhstan, on the one hand, and the Azerbaijan Export and Investment Promotion Agency (AZPROMO) and the Confederation of Entrepreneurs of Azerbaijan, on the other hand. A memorandum of understanding was approved between the Small and Medium Business Development Agency of Azerbaijan and the Food City Alliance with Kazakhstan’s QazTrade JSC, and corresponding partnership agreements were signed between ADY Container LLC and KTZ Express Hong Kong LLC.

“We see how industrial zones are developing in Azerbaijan, where entrepreneurs are provided with great privileges and preferences. Our companies are interested in doing business in Azerbaijan in the logistics, energy, construction sectors, and in the future in the financial sector,” said Chairman of the Board of the Foreign Trade Chamber of Kazakhstan Ayan Erenov.

At a meeting of the Kazakh-Azerbaijani Business Council Minister of Trade and Integration Serik Zhumangarin said the current dynamics of bilateral trade are encouraging: in the first half of this year trade turnover reached $ 194 million, and it is possible that by the end of the year it can be achieved a record figure for 2012, that is, about $480 million. And in the near future, it is planned to bring trade turnover to a billion dollars. Such optimistic forecasts are quite justified, including the signing of new contracts worth $11 million by entrepreneurs of Azerbaijan and Kazakhstan, including for the supply of oil, fat-and-oil products, wagons, etc., which was announced following the meeting of the council.

Azerbaijani President Ilham Aliyev, in turn, praised the signed Azerbaijani-Kazakh documents, noting their role in further expanding business cooperation between the countries, as well as the prospects for the development of interstate relations in other areas. “The relations of friendship and brotherhood between Azerbaijan and Kazakhstan will reach a new high level, and ties between the countries will continue to be a priority in our country’s foreign policy,” the head of state said, stressing that the Kazakh leader’s visit to Baku will make a significant contribution to strengthening cooperation between the two states.

President Ilham Aliyev also expressed gratitude for awarding him the Order “Altyn Kyran” by President of Kazakhstan Kassym-Jomart Tokayev, saying that the peoples of the two countries are linked by history and common roots. The Azerbaijani leader emphasized that today the two independent states are moving confidently along the path of independence, implementing successful reforms, demonstrating high rates of economic development, solving social issues, and strengthening the authority of the states in the world arena. “I consider this award as a sign of respect for the entire Azerbaijani people and I am especially proud to receive this award from your hands”, President Ilham Aliyev stressed.