The complex relationship of Russia and Turkey

Two weeks ago, I suddenly remembered an old rugby song I had heard in my youth. Like most rugby songs, it had numerous variants to it, some so raunchy that they cannot be quoted in a family newspaper. But the one I best recall dealt simply with a duel or fight between two warriors. 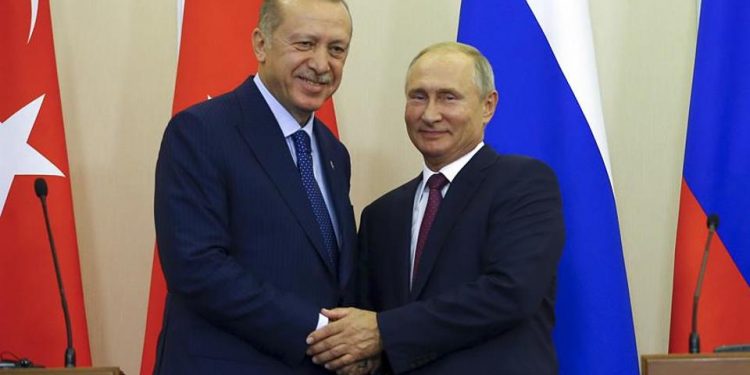 One was a Russian named Ivan Scavinsky Scavar, the other a Turk named Abdul Abulbul Amir. Both were deemed to be brave heroes of their respective empire. Their fight was a mighty encounter that lasted all night long, but dawn found them both stretched out dead.

If judging only by the names of the two contenders, this song was obviously written in jest and was intended for the amusement of night club patrons and rugby fans. But it had a somewhat more serious backdrop to it, since it was written in 1877 in the midst of a Russo-Turkish war. Now such wars were not unusual. Over the centuries there had been at least a dozen wars pitting the Russian empire against the Ottoman Empire. As the Ottomans pursued their relentless expansion westward, the Russians felt compelled to resist them. In fact, it became part of Russian ideology to portray the Romanovs as the stalwart defenders of Christendom against the marauding Muslim invaders. It became a fight between Christianity and Islam in the minds of many. That particular chapter in the relationship came to an end with the last days of the First World War, when both countries experienced revolutions. The Russian Empire became the communist Soviet Union and the Ottoman Empire became the secular Republic of Turkey.

But these transformations did not put an end to conflict between the two protagonists. While Lenin concluded an agreement with Mustafa Kamal Attaturk to delineate the border between the two countries, his successor, Joseph Stalin, was less peacefully inclined. At the end of the Second World War, he launched a political and diplomatic campaign against Turkey. His aim was to gain control of the Turkish Straits and to secure the return of Turkish territories that had once briefly been part of Georgia. He brought considerable pressure to bear on the Turkish government to achieve these objectives and to secure for the Soviet Union a position of influence in Turkish affairs. To resist these pressures, Turkey turned to the United States for help and eventually became a full-fledged member of the North Atlantic Treaty Organization (NATO). Once again, Russia and Turkey were on opposite sides of a great ideological divide. In short, relations between Russia and Turkey carry a lot of historical baggage.

These thoughts were provoked by a recent article that appeared in The Economist. The article was titled “The Odd Couple” and dealt with the relationship between Russian President Vladimir Putin and Turkish President Recep Tayyip Erdogan. It is indeed an unusual one, given the historical background and the numerous issues on which the two countries find themselves on opposite sides of the fence. At one level, it is personal, based on mutual admiration. Putin and Erdogan see themselves and each other as strong leaders willing to use all of the force at their disposal to stay in power. Both routinely beat their opponents into submission. Whether through the use of their security forces or of their tame judiciaries, they systematically arrest and imprison opposition politicians, journalists and academics. They are both autocrats who pay scant attention to democratic niceties, and this constitutes a bond between them.

Both Putin and Erdogan have experienced serious problems in their relations with the West. Russia is now struggling economically under the burden of western economic sanctions. The first set was imposed following Russia’s invasion and annexation of Crimea in 2014. The sanctions have been intensified in the intervening years in response to Russia’s activities in poisoning dissidents living abroad and most recently in response to the poisoning and imprisonment of opposition leader Alexei Navalny. And there is no sign that western countries are prepared to let up their pressure on Russia any time soon. Turkey, too, has seen its relations with the West become increasingly uncomfortable in recent years. Western countries were vocal in their criticism of Erdogan’s response to a military coup attempt in 2016. At that time, he arrested, imprisoned or dismissed thousands of judges, prosecutors, journalists, scholars and teachers with no attention whatsoever to the rule of law. He has also found himself at loggerheads with the European Union over the movement of Syrian refugees. Most recently his decision to acquire an air defence system from Russia has led to strong criticism from virtually all members of NATO, because it flies in the face of standard NATO policies on arms acquisitions. Opposition to the West constitutes a common bond between Putin and Erdogan.

But there are other areas in which the relationship is more complex. The two leaders find themselves on opposite sides of the fence in the Syrian civil war. Russia is firmly allied to the regime of President Bashar al Assad while Turkey supports many of the Islamist movements that are fighting him. Matters came to a head when, following the withdrawal of American forces, Turkey invaded and occupied a stretch of territory in northern Syria in order to prevent it from becoming an autonomous Kurdish entity. Putin could easily have used his air force assets to repel the Turks but chose not to do so. Instead, he chose to negotiate a ceasefire agreement with Erdogan, much to the annoyance of Al Assad. Something similar happened when the forces of Muslim Azerbaijan decided in 2020 to bring an end to the conflict over the disputed territory of Nagorno Karabakh, a strip of land inside Azerbaijan but inhabited by Christian Armenians. While Russia had traditionally sided with the Armenians in the conflict, it did not intervene to save them from defeat when they were overwhelmed by Azerbaijan forces supported by Turkey. Instead, Putin concluded an agreement with Erdogan that allowed him to deploy 2,000 Russian “peacekeepers” in Nagorno Karabakh in exchange for recognizing the victory of the Azerbaijanis. And Putin has shown similar diplomatic flexibility in dealing with Turkey’s involvement in the Libyan civil war, in which both countries support opposing factions.

The inevitable question is: Why is Putin displaying so much forbearance in his dealings with Erdogan? The answer is a fairly simple one and is grounded in a study of Putin’s foreign policy priorities. For Putin, one of the highest priorities is to undermine and weaken NATO, which he regards as a threatening enemy. Russian nationalists viewed with alarm NATO’s move eastward to incorporate Poland, Hungary and Czechoslovakia in the 1990s. They became absolutely paranoid when the alliance later took in the three Baltic States, thus bringing it to the borders of Russia. They have done everything in their power to prevent Georgia and Ukraine from joining NATO, including military intervention in both countries. As a leading Russian nationalist, Putin wants to do everything possible to sow dissension within NATO. His superficial friendship with Erdogan is an instrument in pursuit of that policy objective, since Turkey is producing an endless set of headaches for the alliance.

Louis A. Delvoie is a retired Canadian diplomat who served abroad as an ambassador and high commissioner