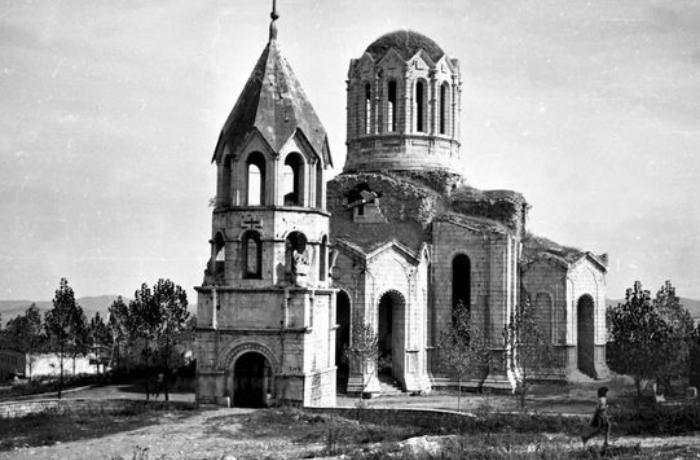 Shusha stands a ruin. Armenians burned and stripped down the palace of the first Karabakh khan, Panah Ali Khan. They razed to the ground the mausoleum of the genius Vagif and the house museum of Uzeyir Hajibeyov, the author of the first opera in the East, and turned the house of the great poetess Natavan into a stone skeleton… The mournful list of monuments harmed by vandals goes on, because every street, every house, and every spring here, even the rocky peaks and unscalable cliffs breathe poetry and history.

Prime Minister of Armenia Pashinyan, however, was unpoetic but quite right when he said that Armenian field commanders and former supreme rulers represented by Kocharyan and Sargsyan had turned Shusha into a forgotten, abandoned city overgrown with weed.

In those 26 years, the Armenian authorities, who declared Shusha the capital of Karabakh and were going to move there government offices and the parliament of the separatist entity, restored only the Ghazanchetsots Cathedral damaged during the first war and, resorting to the services of questionable Iranian forgers, tampered with the original appearance of the unique Govhar Agha Mosque built by the Karabakh khans. The upper mosque remained destroyed—and thank Allah for that, because Azerbaijani restorers now have the chance to bring the mosque back to its original glory.

What is it the Armenian authorities don’t like about the restoration work in the historical Shusha? Do they dream of a devastated, shell-shocked and bullet-ridden Shusha, a city reduced to piles of stones, the way it was in the time of Kocharyan and later Sargsyan?

The Armenian Foreign Ministry issued a more than bizarre statement, accusing Azerbaijan of “covering up war crimes and changing the architectural integrity of the cathedral in Shusha.” Defying time, the angry words transport us as if on a time machine back into the past when the Azerbaijani authorities made similar statements after the occupation and devastation of the ancient city inhabited exclusively by Azerbaijanis. What is Armenia accusing Azerbaijan of? Of blocking the work of UNESCO experts in Shusha. Armenia did not allow UNESCO to enter the territory of the destroyed Azerbaijani monuments for 30 years. What are Armenian diplomats and politicians unhappy with? With Azerbaijan allegedly erasing the traces of the Armenian cultural heritage. This is coming from the authorities of the country that plunged all of Azerbaijani cultural heritage in the occupied seven districts and Nagorno-Karabakh into a dark abyss! This is the subject of discussion of the diplomats and politicians of the country, who dropped deadly Iskander missiles on Shusha.

What is really going on? During the second war, the Armenian church in Shusha was indeed damaged, and the Armenian military, who used it as a shelter for their soldiers and volunteers, accused the Azerbaijani side of deliberately shelling the cathedral building. Azerbaijan, naturally, denied these accusations. War is a grim spectacle, and bombs don’t distinguish and single out mosques and churches.

Armenia taught the world and Azerbaijan a bad lesson by keeping all the Azerbaijani mosques in the occupied lands in ruins and turning Muslim shrines into cowsheds and pigsties. However, Azerbaijan chose to act differently, as befits civilized states and peoples—by starting its great return to the historical lands with the revival not only of its own culture, but also of the religious and cultural heritage of other peoples.

Armenians sound the alarm, assuring the whole world that Azerbaijanis want to turn the Armenian cathedral into a mosque. Again, slander, and the analogy with the Hagia Sophia temple in Istanbul defies reasonable explanation. After all, Hagia Sophia was a place of worship for Muslims for seven centuries. The Azerbaijanis have two historical mosques in Shusha, in which the founding fathers of the fortress, the Karabakh khans, prayed from the day the city was built. Later, the descendants of ancient Albanians, who had been forcibly converted to Gregorianism, were allowed to build their own parish church. Whether it will be an Orthodox church or a Gregorian one is up to the heirs of ancient Albanians—Orthodox Udins. The Azerbaijani authorities are only rectifying the mistakes of the brutal war. The restoration of the damaged parts of the cathedral in Shusha has begun, and its fate will be decided by Azerbaijani Christians. In secular Azerbaijan, state and religion are separated. And the doors of the temple and the aisle to the altar will be open for all Christians.