As previously reported, a video of the execution of a group of Armenian captives during the fighting on the Azerbaijani-Armenian border on September 12-14 of this year has been circulating on social media. 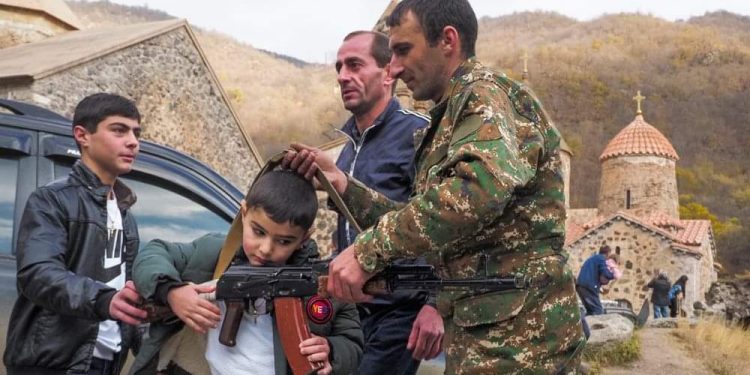 Armenian serviceman hangs a gun on a child's neck and this happens in Kalbajar, the historical land of Azerbaijan. Not difficult to predict who he will be in the future.

The Military Prosecutor’s Office of Azerbaijan launched an investigation into the incident, officially announcing that all necessary investigative and legal steps would be taken to find out the details related to the content of the video and when and by whom it was filmed.

As one would expect, the Armenian side immediately alerted the world community. Since yesterday, international organizations and human rights organizations have been publishing multiple anti-Azerbaijani statements. Today the Russian Ministry of Foreign Affairs and the European Union demanded an investigation of the video footage that has spread all over the world.

Such a prompt mass response to a single video posted by a social media user seems quite strange amid multiple accusations by the Azerbaijani side related to the numerous atrocities and acts of terror Armenia committed against the Azerbaijani military personnel and civilians during the First Karabakh War, the 28-year occupation of Azerbaijani territories and the Second Karabakh War, which failed to draw the attention of international human rights organizations.

The cases of inhumane treatment and war crimes committed by members of the Armenian armed forces have been documented and confirmed by numerous photo and video materials, including those published in open sources. Nevertheless, in response to the war crimes and vandalism committed by Armenian soldiers, former presidents Serzh Sargsyan and Robert Kocharyan did not initiate a single investigation or open a single criminal case!

This raises a legitimate question: does Armenia have the moral right to accuse Azerbaijan of something it is tainted with from head to toe itself? How can foreign politicians, public figures and human rights activists, who have been deaf and blind to the crimes committed by Armenia against the people of Azerbaijan for thirty years, be inspired by the Armenian nationalist and separatist cliques to talk about humanism, humanity and laws?  And what is this public display of hypocrisy and double standards all about?

During the 44-day war, when the Armenian army slaughtered dozens of civilians and leveled a residential area in Ganja with a one-ton Elbrus missile, neither Yerevan nor international organizations breathed a word that a war crime had been committed.

And not just one war crime!

Armenian Prime Minister Nikol Pashinyan, as the Supreme Commander-in-Chief, is personally responsible for the shelling of the Azerbaijani cities of Ganja, Barda, Tartar, Aghdam, for the killings of Azerbaijani civilians. The facts of violations of the laws of war and international legal norms by the Armenian army are quite obvious. But why are there no investigations into these crimes against humanity? Why are the perpetrators not brought to justice? Why are many of them still serving in the Armenian army?

But if “law” and “humanism” mean anything to these people, why do they keep silent about the brutal crimes committed by the Armenian army against Azerbaijani soldiers and civilians, which are not only evidenced in the findings of official commissions but can also be easily proved by videos posted on the Internet?

Has any Armenian human rights activist or civil activist called for the prosecution of their countrymen who committed war crimes? No, they have not. Moreover, in accordance with the Armenian ideas of morality and honor, war criminals in Armenia are crowned with laurels of heroes.

Armenia’s political and military leadership has always stood behind the crimes committed against Azerbaijanis, and they have never made any secret of it. Yet international organizations, for some inexplicable reason, chose to keep quiet about the actions of Armenian war criminals.

That is why, in response to the hysterical cries from Yerevan about “observing the law” and “punishing the criminals”, Azerbaijan has a full and legitimate right to demand at the international level a legal assessment of the Armenian military’s crimes against the Azerbaijani military and civilians.