On October 6, 2021, Russia’s Minister of Foreign Affairs Sergei Lavrov met his Iranian counterpart Hossein Amir Abdollahian in Moscow to discuss regional security and economic cooperation, and to address important concerns regarding the crisis in the South Caucasus. 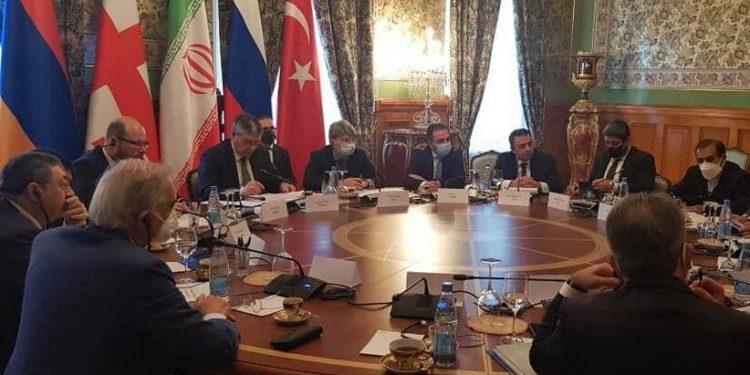 During the joint press conference, Lavrov repeatedly highlighted the idea of a “3+3 cooperation format” including the three South Caucasus states – Armenia, Azerbaijan, and Georgia – plus their three large neighbors, Russia, Turkey, and Iran, to focus on unlocking economic and transport communications in the region. The first meeting within the format took place in Moscow on December 2021; however, Georgia refused to take part. Moreover, recent tensions in the region between Armenia and Azerbaijan as well as Azerbaijan and Iran suggest that the proposed format will not generate visible positive outcomes.

BACKGROUND: After the second Karabakh war, Turkey revealed its intention to establish a 3+3 cooperation format in the South Caucasus, including Azerbaijan, Armenia and Georgia along with Turkey, Russia and Iran, with the intention to boost intraregional economic cooperation and new transit links. The initiative was received positively by Russia and Iran, much less so by Georgia and Armenia given the security situation of these countries. For Armenia, participation in the format along with Azerbaijan in the aftermath of the large-scale conflict seems challenging, as Yerevan has avoided agreements on any land trade corridors with Azerbaijan as long as disagreements over borders remain unsettled. In the case of Georgia, Russia’s participation in the format spells a danger of negative repercussions.

The 3+3 cooperation format is not the first initiative attempting to establish regional cooperation in the South Caucasus. Earlier projects such as “Peaceful Caucasus Initiative,” “Stability Pact for the Caucasus,” “Caucasus Stability and Cooperation Platform,” and “United Caucasus” have been put forward without any substantial success.

Although Russia, Iran, and Turkey are keen to launch the new format, crucial questions and concerns for the regional states must be addressed amid the new geopolitical realities in the region. The main weakness of this plan is the ongoing domestic discontent and resistance of opposition forces in Armenia and Georgia. The opposition parties in Armenia view the proposed cooperation format and envisioned transit routes as another set of concessions in favor of Azerbaijan, which puts Armenia’s sovereignty under question. In this initiative, even the participation of Iran, a long-time partner and ally of Armenia, appears insufficient to eliminate Yerevan’s skepticism. Baku appears unnerved by Iran’s participation and interest in the format, and Azerbaijan has recently experienced major diplomatic tensions with Iran, which moved its large military reserve to the border with Azerbaijan under the pretext of military drills, while Azerbaijani state media openly denounced Iran’s provocative actions.

Simultaneously, Georgia rejects any joint project with Russia due to their unresolved conflict over Abkhazia and South Ossetia. After Lavrov’s press conference, Georgian Foreign Minister David Zalkaniani stated that, “it would be tough for Georgia to participate in the format with the occupier. However, the country should not lag behind major geopolitical processes and projects in the region.” Zalkaliani’s statement was met with sharp criticism from Georgia’s political opposition. In this context, Georgia’s refusal to participate in the format should not come as a surprise.

From Iran’s perspective, the format is an excellent opportunity to gain influence in the region. During the Karabakh war, Iran was largely absent and lacked leverage, unlike Russia and Turkey. Tehran is interested in compensating for this by engaging in post-war diplomacy.

IMPLICATIONS: While the 3+3 cooperation format might seem attractive and promising for regional states and for Russia, the opposite is valid for the West. During a recent visit to Tbilisi, U.S. Defense Secretary Lloyd Austin poured cold water on the idea of U.S. support for a 3+3 format in the South Caucasus, stressing that, “I would just say that Russia, which currently occupies 20 percent of Georgia’s territory, should focus on honoring its 2008 cease-fire commitments before promoting any new discussion platforms.”

The recent Karabakh war radically shifted the regional balance of power, in a manner that does not favor the Euro-Atlantic community. The West and the U.S. were outsiders in the recent war, and their absence from the negotiations table in the post-war period should not come as a surprise. Instead, Turkey has become an influential regional player and an energy transit hub for Europe. In addition, Russia ensured its physical footprint in the region by deploying a peacekeeping mission to the Karabakh region, which grants it more leverage than in previous years and enables it to set a new agenda. Paradoxically, the 3+3 format, which envisages the opening of transportation networks, could facilitate intraregional cooperation and bring economic dividends but would increase Russia’s ability to control these networks and block non-regional actors.

Moreover, Russia’s leading role in this format would offer few advantages to regional states, particularly Azerbaijan and Armenia. The fact that the Russian-led peace forces in the Karabakh region are unable to prevent even minor hostilities between Azerbaijani servicemen and Armenian armed groups, including a recent grenade incident in front of a Russian checkpoint near Shusha city, puts the relevance of this format under question. After the grenade incident, Azerbaijan reported cease-fire violations along its border; hours after an explosive device reportedly wounded three Azerbaijani soldiers at a Karabakh checkpoint.

Simultaneously, Georgia’s participation in the new initiative would allow Moscow to undermine the country’s territorial integrity further. In fact, Georgia does not need to be part of any particular regional initiative since its territory has long been at the heart of most of the region’s key infrastructure projects. Since Georgia constitutes an excellent transit route for vitally important pipelines and railway connections, Tbilisi does not need to align with Moscow or Tehran for new regional projects. History shows that allying with numerous regional and non-regional actors brings more political and economic dividends than exclusively succumbing to the influence of one regional actor.

CONCLUSIONS: The agenda of the 3+3 cooperation format has certain features that could be pragmatically attractive to regional states. However, there is no substantial reason to believe that it will facilitate intraregional cooperation and dialogue between the states involved, particularly Azerbaijan and Armenia. One year after the war, a final peace agreement and resolution of border delimitation and demarcation issues are nowhere in sight. It is therefore unlikely that the format would push the two adversaries towards a dialogue with positive outcomes.

Moreover, the format could undermine the West’s role by excluding its presence and influence as it strives to contribute to the post-war reconstruction and dialogue process. Thus, the West cannot be expected to support this initiative. Simultaneously, chances that Georgia, which desperately hopes to gain NATO membership in the near future, will join the 3+3 format are minimum. For Baku and Yerevan, the initiative could help reopen Soviet-era railway connections between the two states and Turkey, which would render them mutual benefits. Although Armenian Prime Minister Nikol Pashinyan has recognized that cooperating with Azerbaijan and Turkey would benefit Yerevan and even showed preparedness to normalize relations with Turkey, no tangible results have yet been achieved in this regard. Nevertheless, such a move in bilateral relations would provide visible results and attract additional investments necessary for the reconstruction process. Increased investments and engagement from the West is a crucial factor in establishing enduring peace and balancing Moscow’s post-war role in the region.

Fuad Shahbazov is a policy analyst covering regional security issues. He is a former Research Fellow at the Center for Strategic Studies of Azerbaijan and a Senior Analyst at the Center for Strategic Communications. He has been a Visiting Scholar at Washington DC-based Daniel Morgan School of National Security. Currently, he pursues a master’s degree in Defense and Diplomacy at the University of Durham.