The situation in the "area of irresponsibility" of the Russian peacekeeping forces is getting heated, and the proof of it is another incident involving guns in Khankendi. 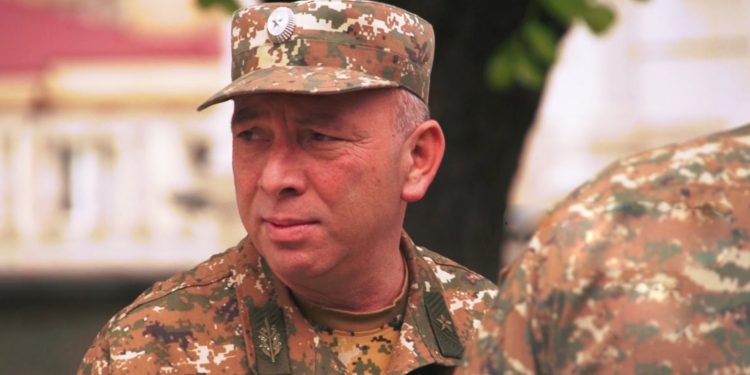 Officially it was a common squabble: some young people had a disagreement with an elderly gentleman of around 60 over a parking spot, after which the “grandpa” pulled out an assault rifle from his car and opened fire. One of the young men managed to lower the gun, and the incident ended without casualties.

But then details started to come to light. Apparently, the fire was opened by retired General Samvel Karapetyan (Oganovsky), former deputy commander of the Armenian occupation corps in Karabakh, which Armenian media was instructed to call “the army of Karabakh”. According to sources in Yerevan, when protest rallies against Serzh Sargsyan’s manufactured victory in the 2008 presidential elections were raging in Yerevan, Oganovsky-Karapetyan arrived in Yerevan with his group and was placed in the basement of the presidential administration, and his fighters were the ones who opened fire on the protesters on March 1, 2008. And later, after Armenia’s defeat in the 44-day war, he supported the so-called “insurrection” of the now former head of the General Staff of the Armenian Armed Forces, Onik Gasparyan, demanding Nikol Pashinyan’s resignation. Now he has again reminded about himself, loudly in every sense of the word.

This appearance of Samvel Karapetyan-Oganovsky in the spotlight is a sure sign of how dangerous the processes unfolding in the “scrap” are. Azerbaijan has repeatedly called attention to the fact that the remaining Armenian armed gangs in Karabakh, which no one is in a hurry to disarm, pose a direct and obvious threat to everyone. Now there is no doubt: the Armenian militants are out of control. More than that, they are being actively used in the game of the very revanchists who have been rallying in the streets of Yerevan for two weeks now, but who are unable not only to shake Nikol Pashinyan’s authority, but even to gather impressive street actions.

But the “scrap” is another matter. It is, so to say, a natural bastion of the “Karabakh clan”, and the revanchists have good reason to count on much more support here than in Yerevan. First of all, from those very “people with guns”. We may speculate whether their plans include a march of fighters from Khankendi to Yerevan, but a much more logical and expected scenario would be an attempt of a coup in Khankendi itself. This was roughly how events unfolded in the early stages of the Armenian claims to Karabakh in 1988, when the former head of NKAO, the first secretary of the local regional committee of the Communist Party of Azerbaijan Kevorkov was removed from power and Robert Kocharyan’s rivals were also pushed off the stage.

Later, there was a conspiracy and a series of political assassinations that ousted Armenia’s first president, Levon Ter-Petrosyan, who was not forgiven for his call for peace with Azerbaijan—and again Robert Kocharyan, with Serzh Sargsyan, who joined him, led the action. Now that Pashinyan could not be ousted just as easily, the revanchists certainly could try to establish their authority in Khankendi for a start.

But Robert Kocharyan’s team seems to have forgotten one small detail: this is no longer 1988, much less 2008. And Azerbaijan will not tolerate this kind of “fun and games” with guns in its territory.

Any attempt at armed uprising in Karabakh will be dealt with in the harshest possible way. Our country has all the legal grounds, capacity and, even more so, the political will, to do it. So, the masterminds of coups and insurrections in the “scrap” can be certain that it will end very badly for them.

What is not at all certain is that someone will cover for them in this situation.