It is a well-known fact that in the thirty years of Armenia's occupation of Azerbaijan's territory, our country faced double standards at various levels and international organizations. Double standards against Azerbaijan were applied both by Russia and by the West. Today we are going to focus on the latter. 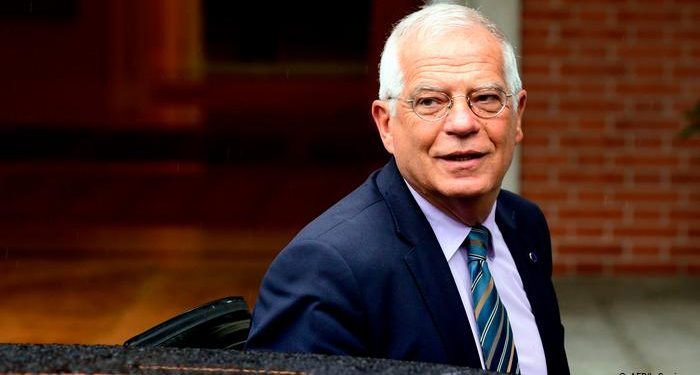 The West has repeatedly demonstrated double morality, supporting the territorial integrity of Azerbaijan but turning a blind eye to the Armenian aggression, occupation of the Karabakh region and Yerevan’s failure to comply with the four UN Security Council resolutions. At the same time, we were constantly reminded that the peaceful resolution of the Karabakh conflict was was the only option. All this was done without even a hint of condemnation of Armenia, let alone sanctions against it. To all intents and purposes, the victim of aggression was put on par with the aggressor. As a result, Azerbaijan was left with no other choice but to implement the UN Security Council resolutions and restore its territorial integrity on its own.

And yet, even now the West keeps reminding us of its double standards, this time with regard to Ukraine. For example, a few days ago, the High Representative of the European Union for Foreign Affairs and Security Policy Josep Borrell, for the first time in the history of the international community, called for a military solution to the conflict in Ukraine. He tweeted after his visit to Ukraine that the conflict should be resolved by military rather than diplomatic means.

“This war will be won on the battlefield. Additional €500 million from the #EPF are underway. Weapon deliveries will be tailored to Ukrainian needs,” Borrel wrote.

Curious, don’t you think? Are we witnessing a change in the EU’s approach to crisis management? Why has the West, normally so vocal about peace, suddenly decided to promote war?

Obviously, the concern about the deaths of innocent civilians in Ukraine shown in the West and in the world community as a whole is a universal phenomenon. On the other hand, during the 44-day war, the Armenian Armed Forces launched rocket and artillery strikes on Azerbaijani cities far beyond the front lines. As a result, civilians were killed and infrastructure was destroyed. The city of Tartar, for example, resembled Stalingrad during the war, so many shells and missiles were dropped on it by the Armenian occupation army. What was the West’s response? Armenia blatantly violated the laws and rules of war and international conventions, but the West, the EU, Borrell and others were blind, deaf and dumb. No reaction to Armenia’s atrocities followed from Western politicians. At the same time, even though Armenia was targeting Azerbaijani civilian sites with ballistic missiles, the Azerbaijani army did not aim a single missile at the territory of Armenia (except for the destruction of the Armenian missile launching pad in Basarkechar District of Armenia, from where Azerbaijani cities were attacked). As a result of the Armenian army’s missile and artillery strikes on the territory of Azerbaijan 93 civilians were killed, including 12 children, 27 women, 454 civilians were wounded, a total of 12,292 residential and non-residential buildings, 288 vehicles were damaged, and the fact of damage to 1,018 farms was established. But the West kept silent and imposed no sanctions against Armenia. Instead of punishing the aggressor, Armenia, all these EU, UN and OSCE officials diligently chafed their tongues, calling for a cease-fire, that is, for continued occupation of Azerbaijani territories. Fortunately, the Azerbaijani leadership, the Azerbaijani Army and the Azerbaijani people were united in their desire to put an end to 30 years of injustice and brought the conflict to a close not thanks to, but despite the efforts of the West.

Meanwhile, European politicians today are demonstrating real actions and moves for Ukraine. For example, leaders of EU diplomacy and the European Commission visited Bucha. Ursula von der Leyen discussed with the president and prime minister of Ukraine the latter’s membership in the EU. Borrell also called for an investigation of the war crimes committed in Bucha and other Ukrainian cities, stating that military victory was a priority over a political resolution of the conflict.

No, we do not in the least want this reverent and sympathetic attitude toward war-suffering Ukraine to be reconsidered. And this is not jealousy or envy. This is merely an acknowledgement of the West’s double standards towards Azerbaijan. This is the harsh reality in which democratic values and the West’s demonstration of the principle of justice seem to magically turn off when it comes to Azerbaijan. None other than Borrel himself confirmed that.