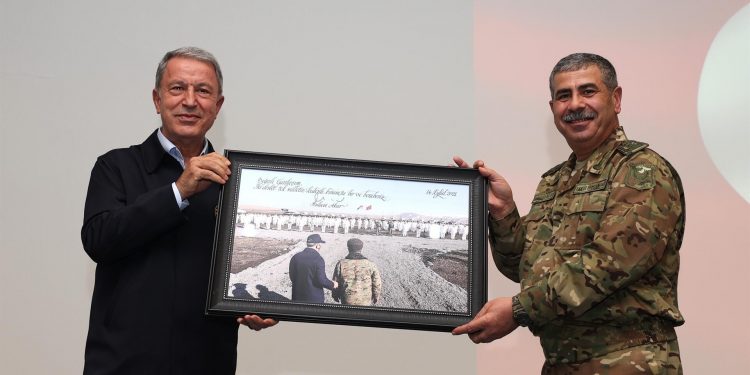 “We perceive the threats against Azerbaijan as being made against us. We hope that Armenia abides by the ceasefire and does not make any mistakes and that the ceasefire in the region becomes permanent and stability is ensured,” he said, speaking on “Distinguished Observer Day” of “TURAZ Şahini 2021 Exercise” in central Konya province on Sept. 14.

The region is going through a sensitive period and Turkey is closely following the developments, he said.

Emphasizing that Turkey respects the territorial integrity and sovereignty rights of all its neighbors, Akar said: “We don’t have any intention of violating anyone’s borders in any way. On the other hand, we will not allow anyone to violate the rights of neither our own nor our friends’ on land, sea and air.

Referring to the importance of the military exercises, Akar said, “These successful exercises also intimidate the enemies watching us and excite our friends and brothers.”

The Turkish Armed Forces (TSK) is going through its busiest period in the history of the Turkish Republic, Akar said.

“All of our forces work hard and put forth their lives when necessary. Our struggle continues in this way. To ensure the safety of our brothers and sisters, we strive for this. Apart from that, everyone should know that we do not have any hidden agenda,” he stated.

Hasanov, for his part, congratulated personnel who participated in the “TURAZ Şahini 2021 Exercise.”

Stating that the Azerbaijani Armed Forces gained great experience thanks to the exercises that have increased in the recent period, he noted that the exercises between the armed forces of the two countries would continue.