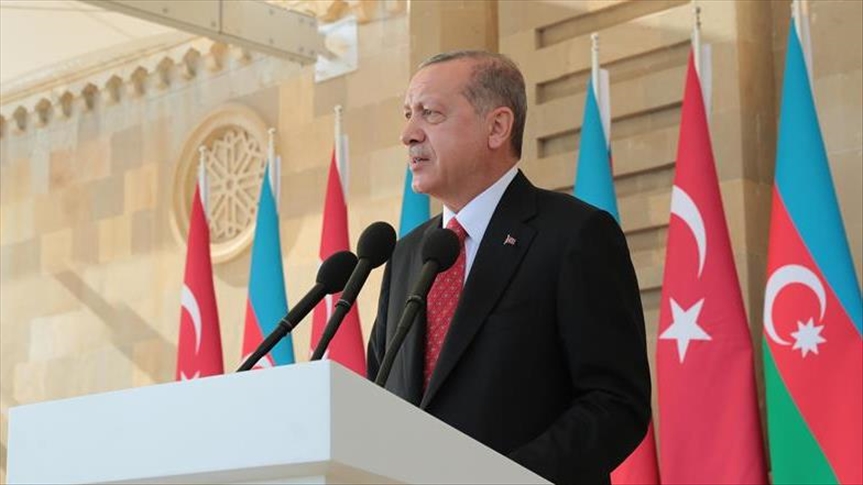 Turkish President Recep Tayyip Erdogan on Wednesday congratulated the 103rd anniversary of the liberation of Azerbaijan’s capital city of Baku from Armenian and Bolshevik occupation.

“I sincerely congratulate the anniversary of the liberation of Baku, the capital of friendly and brotherly Azerbaijan, from occupation, and I commemorate the Caucasian Islamic Army Commander Nuri Killigil Pasha and his heroic soldiers with mercy,” Erdogan wrote on Twitter.

The Turkish leader also conveyed his “greetings and love” to all Azerbaijani people.

“The Caucasian Islamic Army under the command of Nuri Pasha (Killigil) liberated Baku from occupation 103 years ago and established a throne in the hearts of our Azerbaijani brothers. We sincerely celebrate this special day and commemorate our martyrs and veterans with mercy, gratitude and thankfulness,” it said on Twitter.

The ministry also used the “one nation, two states” hashtag on its Twitter post, referring to a notion and slogan of Azerbaijan’s national leader Heydar Aliyev.

On Nov. 10, 2020, following a 44-day conflict between Armenia and Azerbaijan in Upper Karabakh, also known as Nagorno-Karabakh, and surrounding regions, the two countries signed a Russia-brokered cease-fire to end the fighting and work toward a comprehensive resolution.

During the six weeks of fighting, Azerbaijan liberated several cities and some 300 settlements and villages after a nearly three-decade occupation.

“In the 103rd year of Baku’s liberation from occupation, Karabakh, thankfully, is now free. We commemorate our martyrs with mercy. May Allah bless their souls,” Cavusoglu said on Twitter.

On Sept. 15, 1918, an elite Ottoman force – called the Caucasian Islamic Army under the leadership of Nuri Pasha (Killigil) – was sent to Azerbaijan in the final months of World War I, right after Azerbaijan’s plea to the Ottoman Empire.

Along with the Azerbaijani National Army and volunteer forces, the Caucasian Islamic Army liberated Baku from Armenian and Bolshevik occupation, paying the noble price of 1,132 people killed.

Enver Pasha, then minister of war, personally conveyed the message to the Ottoman Empire that Baku was liberated from Armenian gangs.

Baku’s liberation paved the way for the transfer of the capital from Ganja to Baku and ensuring the territorial integrity of Azerbaijan, and set the basis for its contemporary boundaries.