The bodies of three Armenian conscripts with gunshot wounds have been found at a military post in the south-eastern part of the Armenian-Azerbaijani border in Syunik region. 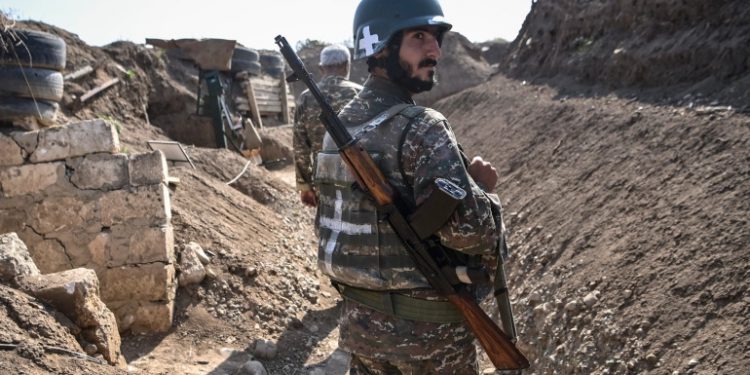 The Armenian Defense Ministry said on Thursday morning that circumstances of the deaths of 19-year-old privates Murad Muradian, Levon Harutiunian and Gor Sahakian are being investigated.

It said the bodies of the three servicemen were found at about 2:15 am.

“The Defense Ministry shares the grief of the loss and expresses support to the families, relatives and colleagues of the killed servicemen,” the statement issued by the ministry reads.

The Defense Ministry said that at least based on the preliminary information available at this moment there is no indication that the incident is connected with any Azerbaijani commando raid as has been claimed by some local media.

In a further official statement issued today the ministry warned Armenian media against “circulating information about the Syunik incident that does not correspondent to the facts.”

The ministry urged all to “follow only official information, not to spread false information about the causes of the incident and the injuries sustained by the killed servicemen.”

“The dissemination of such information is beneficial only to the adversary. An investigation is underway, which will fully clarify all the circumstances of the case, and relevant information will be provided to the public in due manner,” the Defense Ministry said.

The incident in Syunik comes amid tensions along the Armenian-Azerbaijani border where at least five Armenian soldiers were killed and six wounded in skirmishes at different sections since late July. Azerbaijan has confirmed at least one soldier’s death, saying that two Azeri soldiers were wounded during the same period.

Armenia and Azerbaijan have blamed each other for the incidents along the border.

Long-running tensions between Armenia and Azerbaijan over the Nagorno-Karabakh region turned into a large-scale war last year in which nearly 7,000 people were killed in six weeks of fighting that ended in a Moscow-brokered cease-fire deal.

Under the accord, a chunk of Nagorno-Karabakh and all seven districts around it were placed under Azerbaijani administration.

The agreement also resulted in the deployment of around 2,000 Russian peacekeepers in Nagorno-Karabakh and along the Lachin corridor linking the Armenian-populated region with Armenia.