Turkey’s ambitions in the Caucasus strains relationship with Iran

Turkey's highly publicised arrest of alleged Iranian agents is the latest sign of growing tensions between the two neighbors, as Turkey expands its influence in the Caucasus region at Iran's expense. 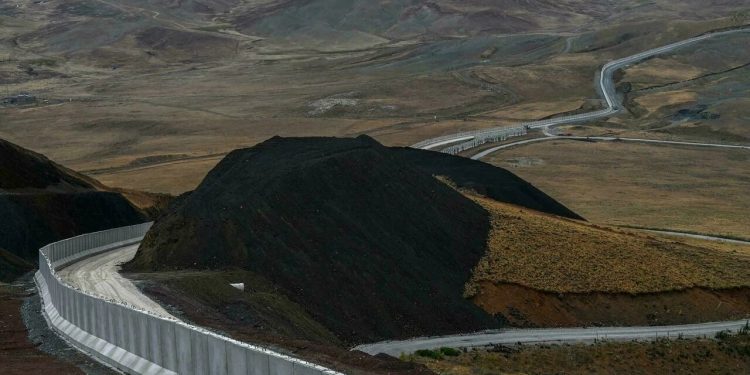 A concrete wall, topped with barbed wire and surrounded by trenches, is being erected along Turkey's border with Iran Ozan KOSE AFP

In October, Turkish security forces claimed to have arrested several Iranian agents who Ankara says were attempting to kidnap an Iranian dissident in the city of Van close to the Iranian border. Video of the arrests was widely distributed to the media, causing embarassment for Tehran.

The incident comes as Iran and Turkey are in a mounting power struggle in the Caucasus. Turkish and Israeli military hardware were vital to Azerbaijan’s forces’ ouster of the Armenian army last year from the disputed Nagorno-Karabakh enclave – a conflict that redrew the balance of power in the region at Iran’s expense.

“Now the Israeli-Azerbaijani ties are closer … there is a new geopolitical reality in the south Caucasus in which Iran’s role has been downsized,” said Galip Dalay of the London-based Chatham House,

“In contrast, the Turkish role has increased, and Russia has asserted its primacy; all of them are the factors that very much make Iran unhappy,” added Dalay.

Iran is now pushing back along with stepping up diplomatic efforts. Iran’s foreign minister held talks with his Armenian counterpart In October. While the same month, Tehran flexed its military muscles carrying out army exercises, for the first time in decades, on the Azeri border.

“Diplomatic ties between Iran, Armenia, and Russia regarding the Caucasus are getting closer. Iran is organizing, is holding military exercises right next to its border with Azerbaijan. So, it can be said that there is tension in the region that will be durable in the long run,” added Unluhisarcikli.

However, Iran’s hardball tactics may have backfired, only strengthening Turkey’s hand in the region. In a show of support, the Turkish military held joint exercises with Azeri forces close to the Iranian border after Tehran’s show of force, underscoring some analysts say how important Ankara is to Baku.

“Definitely, definitely Turkey became much more important for Azerbaijan for the Azeris perception of its own security after the Iranian drills on its border,” claims Zaur Gasimov, an expert on the Caucasus at Germany’s Bonn University.

“Definitely, Turkey is among the benefices of the situation after the Iranian military drills,” added Gasimov. “So I would say the cooperation between Ankara and Baku became much more essential at least for Baku.”

“Tehran observes the deepening of the cooperation in security and military between Pakistan and Turkey, as well as between Turkey and Azerbaijan and Pakistan, with concern, because the perception of the dynamics of regional politics in the greater Middle East takes place in Iran within the framework of sectarianism and the Shia perception,” Gasimov said.

But Iran’s crisis-ridden economy depends on trade with Turkey, which analysts say, allows Ankara to take a robust stance against Tehran.