3+3 group discuss situation in the Caucasus

Alireza Haghighian, assistant to Iran’s foreign minister and director general for the Eurasian region’s affairs, who attended the meeting on behalf of the Islamic Republic supported regional cooperation, especially in fields of economy, trade, transportation and transit as well as cooperation among countries in the form of the 3+3 initiative, the Iranian foreign ministry said. 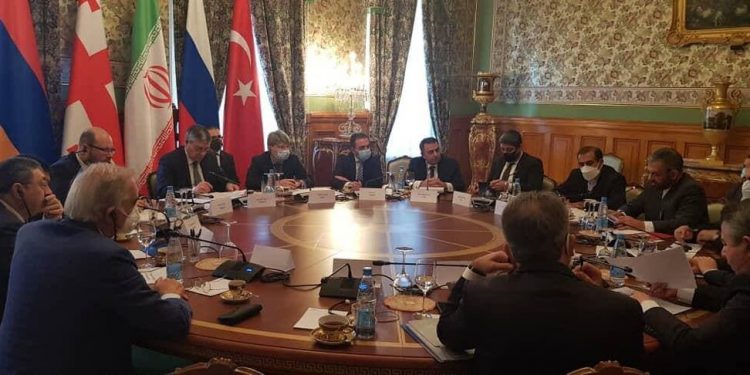 The first session of regional cooperation within the framework of 3+3 group consisting of three southern Caucasus countries (Azerbaijan, Armenia, Georgia) and three neighboring countries including Russia, Turkey and the Islamic Republic of Iran was held at the level of deputy foreign ministers in Moscow.

Haghighian said Iran is one of the countries that put forth the idea of forming the 3+3 group of countries.

He added that the group is in line with the regional policies of the Islamic Republic of Iran and is based on resolving problems, differences and challenges in the region by regional countries.

The Iranian foreign minister’s assistant added that regional cooperation, particularly in fields of trade, economy, transportation and transit will be considerably conducive to growth, development and prosperity as well as lasting peace and stability in the region.

In the meeting, Haghighian also backed the notion of cooperation within the framework of the 3+3 group and underlined the need for respecting the territorial integrity of nations and avoiding any geopolitical changes in the region.

It should be pointed out that Georgia’s representative did not attend the meeting.

The framework of 3+3 has been proposed by Turkey and was welcomed by Iran. Iranian Ambassador to Ankara Mohammad Farazmand said in November that Iran welcomes Turkey’s proposed 3+3 format to solve conflicts in the South Caucasus.

“Tehran supports the proposal of Turkish President Recep Tayyip Erdogan in November 2020 to establish a regional cooperation mechanism in the South Caucasus with the participation of Azerbaijan, Armenia and Georgia as three countries in the region and also with the presence of Turkey, Iran and Russia in the form of 3+3,” the ambassador said in an article.

In the article, the diplomat noted that Iran welcomed this idea with enthusiasm and made the first diplomatic move to recognize this idea at the level of foreign minister.

Farazmand continued, “The ‘3+3 format’ is exactly in line with the principles and foundations of the foreign policy of Iran which is solving the problems of the region by the regional countries, minimizing tensions and developing cooperation and creating a strong region through synergy.”

“President Raisi’s administration, by announcing that the neighbors are the foreign policy priority of Iran, has confirmed these principles and has time and again agreed to the 3+3 initiative (or 2+3 until Georgia is ready to join this group),” the diplomat wrote.