Nominally, Azerbaijan is allied with Russia and Turkey, but in practice, Baku will likely move to strengthen its ties with Ankara, even as Moscow remains a major trading partner. 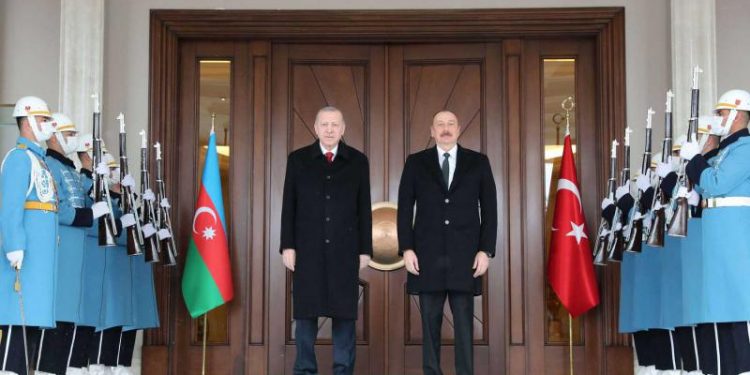 Turkish President Recep Tayyip Erdogan (L) and Azerbaijani President Ilham Aliyev (R) pose for a photo prior to their meeting at the Cankaya Mansion in Ankara, March 10, 2022. (AFP)

Russia’s war in Ukraine has ostracised Moscow from the international community, with western leaders presenting a united front against President Vladimir Putin. Closer to home, the Kremlin has more influence, particularly in the South Caucasus. But even here, tensions between two of Moscow’s allies, Azerbaijan and Armenia, are threatening to weaken Russia’s hand.

Just two days before Russia launched its march toward Kyiv, Putin met Azerbaijan’s leader, Ilham Aliyev, in Moscow. The two presidents signed a 43-point “allied cooperation” agreement, which nominally strengthened Russia’s position in the energy-rich country. It also made Russia, at least on paper, an ally of Azerbaijan and of Azerbaijan’s archenemy, Armenia.

For 30 years, the Kremlin has acted as a mediator in a conflict between Azerbaijan and Armenia over Nagorno-Karabakh, a mountainous border area under Armenian control but internationally recognised as part of Azerbaijan. In 2020, a bloody 44-day war ended with Azerbaijan restoring sovereignty over much of the region and with Armenia, Russia’s ally in the Collective Security Treaty Organisation (CSTO) and Eurasian Economic Union, making concessions to Azerbaijan.

According to the November 2020 ceasefire agreement, Armenia must unblock all economic and transportation ties in the region. This will enable Azerbaijan to complete construction of the Nakhchivan transportation corridor (also known as the Zangezur corridor) by 2023, which would allow Baku to connect its Nakhchivan Autonomous Republic via Armenian territory without Armenian checkpoints. The corridor could eventually become part of China’s Belt and Road Initiative and give Azerbaijan a land route to Turkey while connecting Russia and Armenia through Azerbaijan’s territory.

Armenia, however, has different priorities. Yerevan is set on the construction of the International North-South Transport Corridor, which would connect the country with Russia through Georgia. Russia’s weakened position due to its war in Ukraine could lead the Kremlin to push Armenia to speed up construction of the Nakhchivan Corridor, but Armenia might resist, given that it views the “allied cooperation” agreement between Russia and Azerbaijan is a de facto stab in the back.

The deal signed between Putin and Aliyev states that “armed forces of the two countries will deepen their interaction, including by holding joint operational and combat training activities.” Russia and Azerbaijan might also consider providing each other with military assistance, which could become relevant if the war in Ukraine continues to go poorly for Moscow. Collaboration of this type would undoubtedly give Baku additional leverage over Yerevan.

The problem for Azerbaijan’s leaders, however, is that the West could pressure them to impose sanctions on Russia. Azerbaijan Airlines and its subsidiary, Buta Airways, have suspended all flights to the Russian Federation, while Russia’s state airline, Aeroflot, has also stopped flying abroad. These severed links will result in even deeper isolation for Russia and cause pain to the Armenian and Azerbaijani economies.

Aware that Russian support comes with strings, Armenia has started normalising relations with Turkey, a country that could benefit from Moscow’s isolation, while Azerbaijan and Turkey officially became allies in June 2021, after Aliyev and Turkish President Recep Tayyip Erdogan signed the Shusha Declaration on mutual cooperation. Ankara also increased its presence in the Caucasus following the Nagorno-Karabakh war.

Nominally, Azerbaijan is allied with Russia and Turkey, but in practice, Baku will likely move to strengthen its ties with Ankara (even as Moscow remains a major trading partner). That does not mean, however, that Azerbaijan will allow Turkey to establish military bases on its soil, since such a move would jeopardise Baku’s relations with Moscow.

For now, Azerbaijan and Armenia are trying to balance their relations with the West while also staying close to the Russian Federation. Neither Baku nor Yerevan has imposed sanctions on Moscow and the two nations carefully avoid condemning Russian actions in Ukraine. Their peoples, however, have taken part in rallies supporting Ukraine, with larger crowds gathered in Baku than in Yerevan. Officially, Armenia and Azerbaijan remain neutral in the conflict and hope that fighting does not spill over into the Caucasus.

But if Russia does not quickly achieve its military and political goals in Ukraine, it may demand that its CSTO allies enter the fight. There are already fears in Ukraine that Russia will involve CSTO in the war, while in Armenia, some political analysts expect the Kremlin to pressure Yerevan and other allies to deploy troops to the Donbass, where they would play the role of peacekeepers.

Azerbaijan, for its part, is unlikely to become involved in Russian military operations, despite the agreement that the two countries recently signed. For now, the document remains aspirational, unlike the Susha Declaration, which has been ratified by Azerbaijan’s parliament. Thus, close ties with Turkey will allow Azerbaijan to avoid being used as an instrument by the Kremlin. It will also, much to Putin’s dismay, further complicate his calculus in Ukraine.

Nikola Mikovic is a political analyst in Serbia. His work focuses mostly on the foreign policies of Russia, Belarus and Ukraine, with special attention on energy and “pipeline politics.”