Ankara, seeking alternatives to its often tense relations with the West, sees in Central Asia many great opportunities. 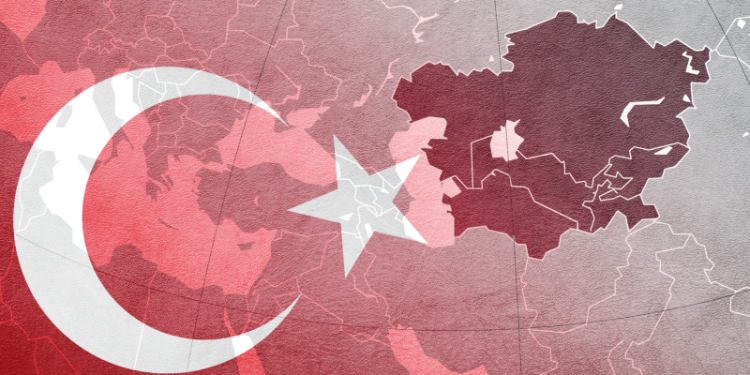 Following the Shanghai Cooperation Organization (SCO) summit in Uzbekistan in September, Turkish President Recep Tayyip Erdogan declared that Türkiye intends to become a full member of the SCO, a China-led Eurasian intergovernmental political, economic, and security organization. At present, Türkiye is a dialogue member. Full membership would make Türkiye the only North Atlantic Treaty Organization (NATO) member in the SCO. While Erdogan’s declaration suggests that Ankara is seeking alternatives to its often tense relations with the West, it can also be seen in the context of Türkiye’s growing influence in Central Asia and broader geopolitical ambitions.

Following the Soviet Union’s collapse in 1991, Ankara set up the Turkish Cooperation and Coordination Agency to increase cultural and economic ties with the Central Asian countries. A couple of decades later, in 2009, the Cooperation Council of the Turkic Speaking States (known as the Turkic Council) was formally established. In 2021, the council decided to rename itself as the Organization of Turkic States. Made up of five members –  Azerbaijan, Kazakhstan, Kyrgyzstan, Türkiye, and Uzbekistan – and two observer states (Hungary and Turkmenistan), the organization’s participant states are home to around 170 million people and a combined GDP of $1.5 trillion. The trade volume among these countries is estimated at $16 billion.

Amid shifting global and regional geopolitics and the Russian war in Ukraine, Türkiye has sought greater engagement with Central Asia through a number of trade and defense agreements as well as arms sales. In March 2022, Erdogan visited Uzbekistan to strengthen the Türkiye-Uzbek partnership. Ten agreements were signed during the visit, while both countries pledged to increase bilateral trade volume to $10 billion.

Similarly, in May 2022, Kazakhstan’s President Kassym-Jomart Tokayev visited Türkiye to sign 15 bilateral deals to strengthen the Kazakhstan-Türkiye strategic partnership. During the visit, Tokayev noted that since Kazakhstan started using Turkish shipping routes, the cargo transport time from Khorgos to Istanbul has significantly declined from 60 days to 13.

Sales of one of Türkiye’s most powerful and lucrative exports – arms – have boosted the country’s image in Central Asia. Used by Ukraine to destroy Russian military hardware, by Azerbaijan against Armenia in the 2020 Nagorno-Karabakh war, and elsewhere,Türkiye’s drones have also attracted the interest of Central Asian countries. Turkmenistan, for instance, a long-time client of Turkish arms, bought more than one Bayraktar TB2. Kyrgyzstan also bought Turkish drones in 2021 and established a new base for drones last month. Likewise, Tajikistan and Uzbekistan have expressed interest in Turkish drones, while Kazakhstan has agreed to begin domestic production of Türkiye’s Anka drones.

Further linking Türkiye’s foreign policy objectives and “drone diplomacy,” China’s cheaper military hardware means that potential joint collaboration between Türkiye and China is not out of the question. Nor are suggestions that Türkiye’s future arms buyers will be SCO members, particularly given that the combined gross domestic product (GDP) of SCO members accounts for nearly 25 percent of global GDP.

Ankara’s greater engagement with Central Asia is partly driven by Türkiye’s energy needs and regional energy transit hub ambitions. Given the country’s limited domestic energy reserves, despite significant gas finds in the Black Sea in 2020, Türkiye remains significantly dependent on external energy supplies. Ankara is particularly keen to secure energy supplies and transportation corridors that neither Russia nor Iran, eager to develop its own trade with Central Asia, has a monopoly over.

Further linking Türkiye’s energy needs and interest in Central Asia is Ankara’s backing of Azerbaijan in the 2020 Nagorno-Karabakh conflict. Aside from gaining greater access to Azerbaijani gas and the Caspian Sea, Türkiye’s support for Azerbaijan, Ankara’s biggest gas supplier in 2019–2020, will likely result in improved access to Turkmenistan’s enormous gas reserves alongside potential trilateral cooperation hydrocarbon exploration. Such efforts will likely strengthen Ankara’s regional energy hub ambitions through energy infrastructure projects like the proposed Trans-Caspian Pipeline (TCP). The TCP aims to pump gas from Turkmenistan to Azerbaijan and onward into the Southern Gas Corridor (SGC) that runs via Türkiye into southeastern Europe.

Another aspect to consider is Türkiye’s push for greater regional and economic connectivity. By positioning itself as an alternative to Russia’s position in China’s Belt and Road, Ankara seeks to expand its sphere of influence and role in Eurasian and global markets, connecting China, Central Asia, and Europe. While Moscow may still influence Central Asia, this influence appears to be waning, resulting in Central Asian governments eager to find alternative partners.

The Trans-Caspian International Transport Route (TITR), also known as the Middle Corridor, is a multilateral, multimodal transport route. The route connects China to Türkiye and Europe via Kazakhstan, the Caspian Sea, Azerbaijan, and Georgia. Estimates suggest that TITR will transport between 75,000 to 100,000 containers annually. Rather than traversing across Russia, which has been the main land link between China and Europe for decades, TITR bypasses Russia with the newly built 826-kilometer-long Baku-Tbilisi-Kars (BTK) railway. The BTK railway, sometimes referred to as the Turkish version of the New Silk Road, stretches from the Caspian Sea port of Alat in Baku, Azerbaijan, across Georgia to the city of Kars, Türkiye, for access to European markets.

The China-Kazakhstan-Uzbekistan (CKU) railway project, estimated to cost around $4.5 billion, aims to connect China to Europe via Kazakhstan, Turkmenistan, Iran, and Türkiye. In so doing, it aims to reduce the journey by around 900 kilometers and eight days as well as bypass Russia. Following a tripartite online meeting held by China, Kyrgyzstan, and Uzbekistan earlier this year, China’s National Development and Reform Commission announced in early June that construction of the transnational CKU railway would begin in spring 2023. Currently, preparations for the three countries to carry out a feasibility study are underway.

While Russia has used its historical role as a regional hegemon to curtail Turkish influence in Central Asia, in recent years, Türkiye and Russia have developed stronger economic and political ties partly due to Türkiye’s often tense relationship with Western countries. While Ankara has provided Ukraine with drones and other arms, it has not imposed sanctions on Russia.

With the European Union and the United States criticizing Türkiye’s human rights record and the U.S. imposing various sanctions on Türkiye over the years, Ankara has strengthened relations with its non-Western partners. In 2021, after Türkiye bought Russian S-400 defense systems, the U.S. sanctioned Türkiye, and removed the country from a U.S.-led program developing F-35 fighter jets.

Aside from growing political ties, Türkiye and Russia have strengthened economic ties. Türkiye’s financial woes are largely due to poor management and Erdogan’s unorthodox economic policy. In September this year, the country’s official inflation rate soared to a new 24-year high, exceeding 83 percent. Alongside Türkiye’s spiraling economy and low poll numbers for the current government, the Erdogan-led Justice and Development Party (AKP) has been looking for new partners.

Having refused to ask for assistance from the International Monetary Fund (IMF) and with talks on a swap deal with the United States Federal Reserve failing, Ankara has become economically dependent on Moscow to provide the money necessary to avoid a balance of payments crisis ahead of Türkiye’s elections next year. In August, the two countries signed an economic cooperation deal. Over $20 billion appeared on Türkiye’s balance sheets since January. Although this source is unknown, it is assumed that most of this sum is from Moscow.

Although Moscow and Ankara have strengthened political and economic ties in recent years, current events suggest that Beijing, rather than Moscow, is moving closer to Ankara. For Türkiye and China, stronger bilateral relations support their respective foreign policy goals. For Beijing, Ankara’s strategic position, situated on a key route for China’s Belt and Road Initiative (BRI), and located between Eurasia, the Middle East, and the Mediterranean, means that Beijing can use Türkiye as a launching pad for greater influence in and engagement with the Middle East and the Mediterranean. For Ankara, stronger engagement with Beijing means that China can support Türkiye’s ambitions on the world stage without the challenges that deeper ties with Russia entail, simultaneously balancing Türkiye’s relations with the West.

Since the official strengthening of bilateral relations in 2010, China has played a growing role in Türkiye’s foreign policy, resulting in stronger political, economic, military, and security bilateral ties. In addition to supporting Türkiye through “vaccine diplomacy,” China has also demonstrated interest in trade and military equipment. Currently, China is one of Türkiye’s biggest importers among individual countries. In 2021, Sino-Turkish bilateral trade totaled $32 billion, a significant increase from $1 billion in 2001. In addition, in 2019, China extended its currency swap agreement with Türkiye. As per this agreement, Beijing provided Ankara with an additional $1 billion cash transfer.

Following a strategic cooperation agreement in 2010, both countries also signed a memorandum on the aforementioned Trans-Caspian International Transport Route. TITR is intended to complement the BRI. Additionally, Erdogan has visited Beijing numerous times, including for the opening ceremony of the 2017 BRI Forum.

In another example of closer relations with China, Türkiye currently favors China’s stance on the Uyghur issue despite Türkiye hosting a large Uyghur diaspora and previously having raised concerns. Although Beijing has repeatedly warned Ankara not to become involved in Uyghur issues, various conservative and nationalist groups in Türkiye are keen for their government to have a say in the issue. An extradition treaty between the two countries was ratified by China in 2020, but Ankara has not done so yet.

At the same time, Türkiye is demanding the extradition of Kurds from Sweden as a condition of Türkiye approving Sweden’s entry into NATO. While China may play the “Kurdish card” in response to Türkiye’s criticism, economic pragmatism is expected to continue to override pan-Turkic solidarity, given that Ankara has avoided any prolonged sustained criticism of China’s Uyghur policy.

The (Re-)emergence of Turkish power

Ankara’s interest in playing a more significant role on the global stage is demonstrated by its activities regarding Taliban-ruled Afghanistan and the Syrian refugee crisis. More recently, in relation to the Russian war in Ukraine, Ankara has sought to mediate between both countries through peace talks and played a role in brokering an agreement in July for Ukrainian grain release efforts and in September for a Russia-Ukraine prisoner swap.

As part of Ankara’s push for more engagement with Central Asia and China for greater regional connectivity and economic cooperation, Türkiye aims to establish viable alternative routes to those that run through Russia. While the creation of new trade routes and greater Turkish interest in Central Asia is influenced by Türkiye’s domestic energy needs to some extent, it also builds on Ankara’s cultural and economic outreach in the region. With Russia at war with Ukraine, Türkiye is reinforcing its global ambitions and foreign policy objectives, positioning itself as a key “connector” between Asia, Europe, and the Middle East.

It is within this broader context that Türkiye’s quest for growing geopolitical power on the world’s stage can be placed. Erdogan’s declaration following this year’s SCO summit suggests that Ankara both can and wants to pursue non-aligned foreign policy objectives that suits its own geopolitical goals rather than those that favor NATO. Nonetheless, it remains to be seen how effective this effort will be.

Genevieve Donnellon-May is a master’s student in water science, policy, and management at the University of Oxford. Her interests include China, Africa, and regional resource governance.