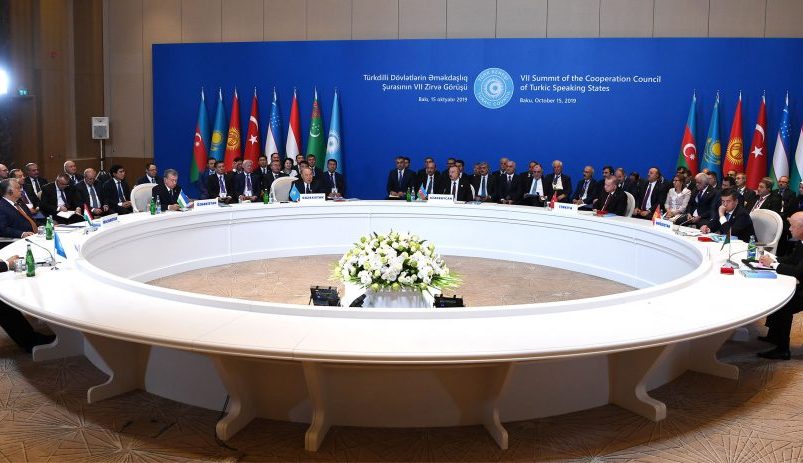 The gathering was initially scheduled to take place in Turkistan, but due to the worsening epidemiological situation, it was held online. The meeting adopted the Turkistan declaration. – writes Assel Satubaldina

Opening the meeting, Kazakh President Kassym-Jomart Tokayev said Turkistan is the land of the forefathers, a sacred place and home for Turkic speaking people.

“Our goal is to transform the Turkic world into one of the most important economic, cultural and humanitarian regions of the twenty-first century. We suggest starting the modernisation of Turkic civilisation by introducing the world to the heritage of (Khoja Ahmed) Yasawi and sacred Turkistan. Today’s summit is therefore held with the motto – Turkistan – the spiritual capital of the Turkic world,” said Tokayev.

Tokayev said that despite the unprecedented challenges, cooperation between the Turkic speaking states has remained, and the states need to work together to seek new ways to strengthen relations.

In the fight against the Covid-19 pandemic, mass vaccination is crucial to stopping the spread of coronavirus infection.

He said that the international community acted in isolation in the fight against the pandemic which resulted in vaccine disputes.

He called on the gathering to support one another and share their experience.

“At the 75th session of the UN General Assembly, Kazakhstan initiated the establishment of the International Biosafety Agency. I am confident that you will support this idea. There is no doubt that in the future the agency will contribute to the prevention of biological threats and the exchange of data on dangerous diseases,” said Tokayev.

Economic consequences brought by the pandemic

The Turkic council member countries saw their bilateral trade turnover falling due to the pandemic.

Last year, the trade turnover between Kazakhstan and other member states amounted to $7 billion, which is 11.2 percent lower than pre-pandemic figures.

“One of the main tasks for our countries is to boost trade turnover. I would like to mention the broad investment, trade and economic opportunities of Turkistan, historically located at the crossroads between civilizations. Taking into account its vast resource base, human capital and tourism potential, I suggest creating a special economic zone in the Turkistan region, uniting the Turkic countries,” said Tokayev.

Turkic countries can also benefit from increased cooperation in the water and energy sector.

“The water issues in the region are very important and can cause serious problems. Efficient and equitable use of transboundary water resources is the key to the stability and prosperity of our countries. We are ready for joint implementation of waterwork construction projects,” he said.

The pandemic has revealed the importance of promoting new technologies. Tokayev suggested developing cooperation in such areas as artificial intelligence, big data, digitisation, and online commerce.

“Obviously, this step will promote innovative development and strengthen the competitiveness of our countries. In Kazakhstan, new technologies have become a priority. We have e-government working effectively and advanced technologies and digital solutions are widely used in the banking sector and financial system. We are ready for an exchange of experience in these areas,” he said.

The Turkic Investment and Integration Fund

Tokayev urged the gathering to prepare to create the Turkic Investment and Integration Fund that will become the first joint financial institution. He suggested locating its headquarters at the Astana International Financial Centre (AIFC) in Nur-Sultan.

To facilitate cooperation in education, Tokayev proposed to establish the Great Turkic People education fund that will coordinate ties between universities on academic mobility, internships and professional development.

“We are ready to allocate 50 grants (Yasawi scholarship) for young people from fraternal countries for bachelor studies at the Khoja Ahmed Yasawi International Kazakh-Turkish University,” he said.

More archaeological works should be undertaken in Turkistan, a centuries-old city whose history is yet to be discovered.

“Moreover, it would be good if we built a common architectural object in Turkistan to symbolise friendship and unity of the Turkic peoples,” said Tokayev.