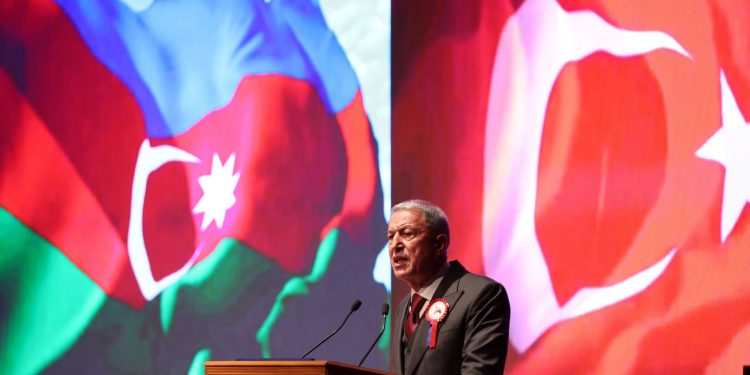 “We support every effort to normalize relations between Azerbaijan and Armenia. But there are those who want a deadlock, everyone should know that we stand against them,” Akar said.

On the second anniversary of Azerbaijan’s victory in the second Nagorno-Karabakh War, “Victory Day of Nov. 8,” was celebrated with a reception in Ankara. National Defense Minister Hulusi Akar, Ambassador of Azerbaijan to Ankara Rashad Mammadov, Vice President of Azerbaijan Hikmet Hajiyev, Inter-Parliamentary Friendship Group President Ehliman Emiraslanov and many guests attended the reception.

Referring to the significance of the day, Akar said: “It is an important day, a meaningful anniversary. These days have not come easily. The place of Azerbaijani Turks in our hearts and lives is very special and important. We carry out all our activities with a bond of brotherhood beyond friendship. We continue our work with this awareness. There are no other nations in the world that are so sincere, understand and recognize each other.”

In addition, Akar noted that both countries did their best to stabilize the region and said that they continued to work together with the Russians after the cease-fire and that they closely followed all developments within the framework of the activities carried out.

Hajiyev also emphasized that Türkiye has stood by Azerbaijan since its independence.

“The Azerbaijani people never forget the fact that brotherly Türkiye is with Azerbaijan and the moral, political and diplomatic support of all Turkish people to Azerbaijan. The heart of Türkiye, of 80 million people, was beating together with Azerbaijan,” he said.

In this context, the Turkish Foreign Ministry issued a celebratory statement on the Victory Day of Azerbaijan.

“We congratulate brotherly Azerbaijan on the occasion of its Victory Day of Nov. 8, the anniversary of the liberation of its occupied territories as a result of a heroic struggle,” the statement said.

The historic triumph of the Azerbaijani army has also sowed the seeds of hope for sustainable peace and tranquility in the whole region.

Türkiye will continue to stand with Azerbaijan in full solidarity and coordination for the promotion of security, stability and cooperation in the South Caucasus, including the restoration and improvement of the infrastructure in the liberated territories,” the statement said.