A total of 316 Turkish nongovernmental organizations (NGOs) are voicing “strong” objections to a draft resolution the French Senate is set to consider next week concerning imposing sanctions on Azerbaijan. 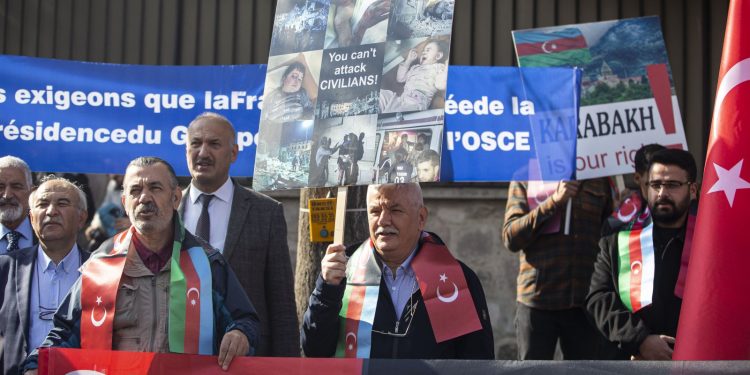 Representatives of Turkish NGOs protest a French motion proposing sanctions on Azerbaijan in front of the French Embassy in Ankara on Monday, Nov. 7, 2022 (AA Photo)

Upon the call of the Türkiye-Azerbaijan Friendship, Cooperation and Solidarity Foundation following the news, the representatives of 316 NGOs came together on Monday and presented a petition protesting the bill to the French Embassy in the Turkish capital Ankara.

“We strongly condemn their efforts for this motion,” the foundation’s chairperson Aygün Attar told reporters as the group held a press conference at the gates of the embassy.

Should the motion pass at the French Senate and sanctions against Azerbaijan are ratified, the foundation will call for a countrywide boycott of French goods, Attar said.

She highlighted that more than 23,000 people lost their lives and over a million people were displaced in Azerbaijan during the first and second Karabakh wars. “Hundreds of people, including infants, women, and elderly, were killed in Khojaly,” she said, referring to the 1992 massacre of ethnic Azerbaijanis in Khojaly, a small town in Karabakh, previously known as Nagorno-Karabakh.

Despite being the co-chair of the Organization for Security and Co-operation in Europe (OSCE) Minsk Group, an initiative founded in 1992 to encourage the peaceful, negotiated resolution to the Karabakh conflict, France “did not even lift a finger” or “release a statement of condemnation,” Attar went on to say.

“As a mother and a grandmother, I would like to say in Khojaly alone, 63 children, 106 women, and 70 elderly people were killed, 487 people were wounded. The Armenians took 1,275 people as captives. Not a word was heard about 150 people, 68 of whom were women and 26 of whom were children, ever since. Various nations, chiefly France, who claims to be civilized and democratic, have kept silent about this,” Attar said.

She slammed France for “overlooking ethnic problems” on its own land, “yet, criticizing Azerbaijan for ending the occupation of its land by using its rights through international law.”

France remained silent while “innocents” died in Armenian attacks with rockets and missiles on Azerbaijani cities during the 2020 Karabakh war, Attar reminded. “It still kept mum while 275 Azerbaijani civilians died as a result of Armenia refusing to comply with the Nov. 10, 2020 deal and hand over its mine map to Azerbaijan,” she said.

French President Emmanuel Macron embraces the rhetoric of Armenian lobbies, Attar added and pointed out the genocides France committed across Africa throughout history.

“Securing Azerbaijan’s independent state willpower is neither the job nor the responsibility of the French Senate,” Attar stressed.

“Azerbaijan will not stay silent about what happens in the South Caucasus for its own security,” she said.