Image recently submitted to the record as a courtesy of guest contributors. This image shows the destruction of Azerbaijani ancestral graves in Karabakh. Armenians and Azerbaijanis continue to be reeled into the politicization of war crimes committed during the Karabakh conflict, as well as international controversy over wartime and post-2020 ceasefire era rhetoric. 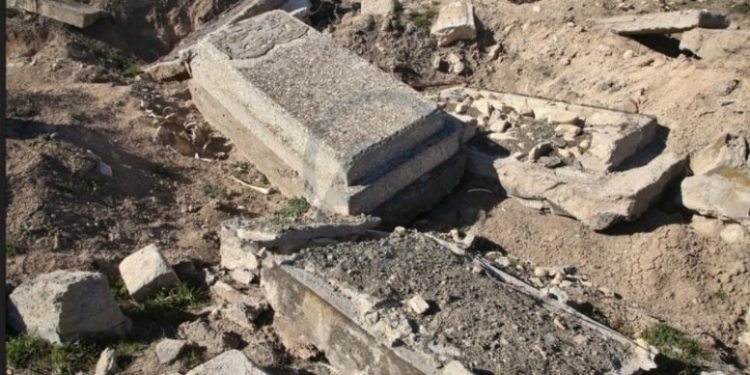 On April 12, Thomas de Waal of the Carnegie Endowment posted to his Twitter a photo expressing his disdain for Azerbaijani President Ilham Aliyev’s visit to an exhibition of the helmets of Armenian soldiers killed during the 44-Day War in Karabakh. De Waal was sharing a post by Neil Hauer regarding the controversial exhibit. This triggered a response from the Azerbaijani community, which then led to the exposition of Armenian use of Aghdam’s destruction as a tourist attraction, citing a project called “Dark Tourism” as the source.

The Azerbaijani community called de Waal out for what they considered a one-sided commentary of the status of the conflict.

“Oh, why you have never spoken about Azerbaijani dead soldiers fed to pigs by Armenians? Or it’s ok for you? Here is a photo with the following comment “ this garbage we fed to pigs” Please, speak up!,” wrote one Twitter user.

The Twitter user, whose name was omitted from the record for their privacy, then asked de Waal why he had never spoken out against the Armenian Prime Minister’s advisor’s human rights abuses.

“Graves as Weapons”series, politicization of ethnic cleansing in WW1 Caucasus

“Why you have never spoken about Vagarshak Harutunyan, advisor to the PM Pashinyan? Openly admitting that Armenians shelled sleeping cities far removed from Karabakh? Only to cause panic. Or Azerbaijani lives don’t matter?! Please, speak up!” wrote the Twitter member.

“@Tom_deWaal humiliation of the other side?THE OTHER? REALLY? It is only the Azerbaijani side that constantly spares no effort to humiliate Armenians! There cannot be peace under such kind of hatred fabricated by Aliyev!!!!!!!,” wrote “Suzie”.

In response to this controversy, Republic Underground news continues to record the politicization of genocides, ethnic pogroms, and wartime conflict era rhetoric in the Caucasus.

Some likewise expressed disdain with de Waal for being “part of the problem.”

“You are part of the problem Tom… I hope you satisfied yourself with the mockery with which you engaged over the years,” wrote an Armenian Twitter user.

Others called out deWaal for partiality over the display of the deceased Armenian soldiers’ helmets, but not for the destruction of Azerbaijan’s ancestral cemeteries. Still, others noted that monuments to the demise of the enemy are a common part of the narrative in the Karabakh conflict.

“In Armenia, there is a monument to a person who holds the head of a Turk under his feet, is this not humiliation and incitement to hatred?,” wrote username Quantum Satis. The statue in question was that of Taluut Pasha, who is credited with organizing the Ottoman Turkish displacement and pogroms against Armenians during World War I’s regional conflict. In addition to the Armenians who were displaced, the conflict resulted in the displacement and ethnic killing of Azerbaijanis, Meskhetian Turks, who also faced continued removal from the region into the 1940s, and regional Jews. See more on this history at The Jerusalem Post.

Just as Armenians call for the recognition of the ethnic cleansing and deportation of Armenians in 1915, Meskhetian Turks, also known as Ahiska Turks, have called for recognition of their deportations, with one of the most commonly known documented on November 14, 1944. In this move for recognition of history’s sins, the conflicts of the past and present are drawn increasingly into “tit-for-tat” political echo chambers such as that which occurred on de Waal’s Twitter.

The Twitter thread’s heated exchange continued with western spectators commenting on the “mutualism” of the process of developing “domination monuments.” Armenia has notably constructed a wall from license plates that were taken from Azerbaijanis cars in the previously occupied region.

The politicization of ethnic cleansing, regional pogroms, and the progression of regional conflicts continues to plague the post-Soviet region. Republic Underground will soon follow up with a continuation of “Graves as Weapons” a series exploring the misuse of regional wartime events in a westernized political narrative. 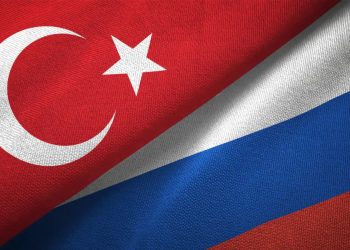 Why Russia and Türkiye need each other