Turkey's leading players such as Hakan Calhanolgu and Burak Yilmaz will be more than 1,400km from their capital city as they face Wales in Wednesday's Euro 2020 match in Baku. 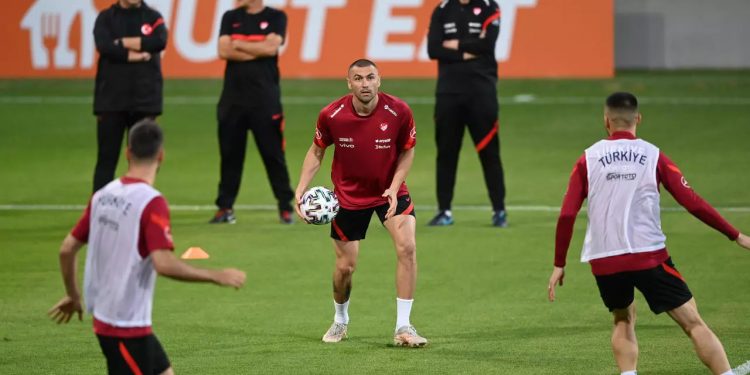 Despite the distance, the fixture will feel like a home game for the Crescent Stars due to the historical, cultural and linguistic links between the country and the oil-rich state of Azerbaijan, which overlooks the Caspian Sea.

In the days leading up to the match, a second for both sides in the tournament, Turkish memorabilia was on sale at all souvenir shops while flags flew in the ‘City of Winds’ from apartment buildings, shops and offices.

Relationships between the two countries, who share a short border, have always been excellent, with visa-free access between both states.

Ankara was the first to recognise the country’s independence after the Soviet Union’s fall in 1991.

“We have the same roots. We have almost the same language, so we do understand each other. It’s also one of the huge advantages,” Azerbaijani football federation general secretary Elkhan Mammadov told AFP on Tuesday.

“Another advantage is geographical, we are neighbouring, bordering countries, we have a huge community of Azerbaijanis living in Turkey and Turkish living in Azerbaijan. This is now all mixed.

“It’s easy to travel. There will be huge support for Turkey by Azerbaijani local fans and it’s a huge advantage for Turkish fans because they have a direct flight.”

“It’s a huge advantage for the fans because in two-and-a-half hours they can get to Baku,” he added from his office with views of Baku’s towering modern skyscrapers.

– ‘Turkish people are our brothers’ –

The links between the two were strengthened during the conflict between Azerbaijan and Armenia in Nagorno-Karabakh last year.

Turkish president Recep Tayyip Erdogan has been in Azerbaijan this week to celebrate the victory in the conflict with his counterpart Ilham Aliyev.

Erdogan is expected to be at the 69,000-seat Olympic Stadium for the fixture alongside his “brother Aliyev”.

“This only shows the strong links between the two countries,” Mammadov said.

“It’s another proof of it. The Turkish and Azerbaijani football federations were so happy during the draw when Turkey were drawn to Baku,” he added.

According to Mammadov up to 4,000 Turkish fans will fly to the Azeri capital for the game and as of early on Tuesday 25,000 of the maximum 31,000 tickets had been sold.

But, despite the centuries-old connections covering all parts of society, the clamour of global football’s superpowers mean at least one local will be backing the so-called visitors along with around 300 Wales supporters.

“It’s mostly because of the team but I am a very big fan of Gareth Bale and Aaron Ramsey,” 19-year-old Fakri told AFP near the bustling Fountains Square.

“I’m a Real Madrid fan but I was supporting him even when he was at Tottenham. His style of play is very cool so I am his fan.”

“For me a draw would also be a good result because it’s fair for me,” the economics student said.