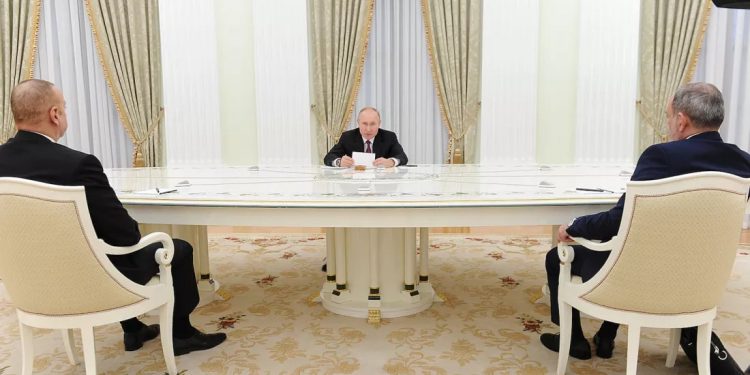 On Friday, 26 November, they will meet in Sochi with the participation of Russian President Vladimir Putin; and on 15 December, they will meet in Brussels with the mediation of the president of the European Council Charles Michel. After a break of nearly a year, and following weeks of speculation as to when and where a necessary and overdue meeting of the two leaders will take place, like the proverbial delayed bus, the announcement of the two meetings came almost simultaneously.

The agenda of the trilateral meeting with President Putin is clear. It is the implementation of the 10 November declaration that ended the 44 day Karabakh war, and the subsequent statement issued after the only in-person meeting between Pashinyan and Aliyev since – that held in Moscow on 11 January 2021. The different interpretations of these statements by the Armenian and Azerbaijani sides, and the many issues that have arisen in the process of implementing the provisions of the two statements, have created huge uncertainties and resulted in a year of tension and incidents, rather than one of building peace in this crucial post-war period.

The Russians, now truly enmeshed in the situation thanks to the military force they deployed immediately after 10 November ostensibly to keep the peace, have overall managed to keep the situation from escalating too much, with Putin personally playing the role of mediator, and with the entire Russian military-security establishment in support. The Russians want to minimise incidents, but now, more than ever, have no interest in a genuine and sustainable Armenia-Azerbaijan peace. Their future in the region depends on continued tension and risk of war which makes a renewal of the agreement for the deployment of their forces, in 3 years and 11 months’ time, a necessary inevitability. From Sochi expect tangible agreements that would sort out some of the mess of the last year, one or two surprises to pacify the political needs of the two sides, and even perhaps a sweetener or two for the international community so arrogantly elbowed out by the Russians one year ago. Putin will no doubt do, as he has done several times in the last year, afterwards speak of the Russian Man’s burden in the South Caucasus and the near abroad.

How about then the second meeting, less than three weeks later, this one mediated by the president of the European Council Charles Michel, and held on the margins of the EU Eastern Partnership Summit? The EU has been seeking a role in the context of the Armenia-Azerbaijan impasse. Its leadership was criticised by the European parliament as well as by experts and civil society activists, for passivity during the war, and for lethargy since. Michel’s success in getting the leaders to agree to a meeting (at a time when they already knew they were meeting in Sochi only a few days before) is symbolically important. It also means that the Armenian and Azerbaijani leaders are giving a nod for the EU to be more involved going forward. But apart from the photo opportunity, the success of the meeting will only be judged by the importance of the substance of what, if anything, is agreed upon.

The meeting offers an opportunity for the EU’s past inaction to be turned into an asset since the slate is pretty much clean. Unlike in Sochi, in Brussels, the leaders of Armenia and Azerbaijan need not be stressed by the necessity to operate strictly within the 10 November declaration, and all that implies. They can move immediately to a positive agenda related to issues that everyone, except for radical zealots, understands is crucial for the future of both Armenia and Azerbaijan and more broadly for the whole region: Issues related to connectivity, investment, human development and education should dominate the Brussels talks. Here the EU needs to be generous and ambitious, and insist on frameworks that will require the two sides to work together, preferably also with the participation of the Georgians.

But, and it is a big but, this will only make sense if anchored in a broader political framework. A bundle of technical projects on their own is simply not sufficient in the current context. Something else is necessary. This can include:

(a) An agreement in principle by Aliyev and Pashinyan to support a long term comprehensive and inclusive process for peace and stability in the South Caucasus which the EU can initiate after a process of broad consultations with international partners;

(b) An agreement to institutionalise the current embryonic processes of confidence-building in Armenia-Azerbaijan relations through the participation in the process of officials from both countries, from the EU and from other interested sides;

(c) An agreement to establish EU military liaison offices in Baku and Yerevan, to work with the sides in support of the current end of hostilities arrangements and assist in moving the process to the next stage;

(d) An agreement in principle to work on a framework for the delivery of humanitarian assistance to all those affected by the conflict and its aftermath;

(e) A recognition in principle by both Armenia and Azerbaijan of the harm that has been done by the use of landmines, cluster munitions and other unacceptable tools of war and an agreement to move forward together by adhering to international agreements and conventions such as the Ottawa Convention, and the Convention on Cluster munitions;

(f) An agreement to set up with EU support, a joint council of experts from both sides that can help articulate ideas which can feed into future negotiations, and broaden the channels of communication;

(g) The EU should have a small but rapid financial facility to support at arms-length regional initiatives involving Armenia, Azerbaijan and Georgia, be it at a governmental and at a non-governmental level. These initiatives need to be allowed to develop organically without much EU input except to ensure financial oversight.

All this is within the realm of the possible.

Sochi and Brussels will be two different meetings and they need to be approached differently by all sides. The EU should not try to replicate Sochi in Brussels. That would be both disingenuous and unachievable. But with some astute diplomacy and a measure of goodwill from all sides, the Brussels meeting can also be meaningful, and can in the long term end up being even more significant for the future peace and prosperity of the South Caucasus.

This is an opinion prepared for Karabakh Concise by Dr Dennis Sammut, Director of LINKS Europe and Managing Editor of commonspace.eu, and co-rapporteur of an Armenian-Azerbaijani expert liaison group working on ideas for confidence-building in support of peace in the South Caucasus. The Group held its first meeting in Kachreti, in Georgia, on 30 September 2021 with the support of the European Union.