Ukraine’s Ambassador to Azerbaijan: “War has begun. There will be famine.”

In his exclusive article for haqqin.az Ukrainian ambassador to Azerbaijan Vladislav Kanevskiy reviews the results of the invasion of Ukraine by the Russian army. 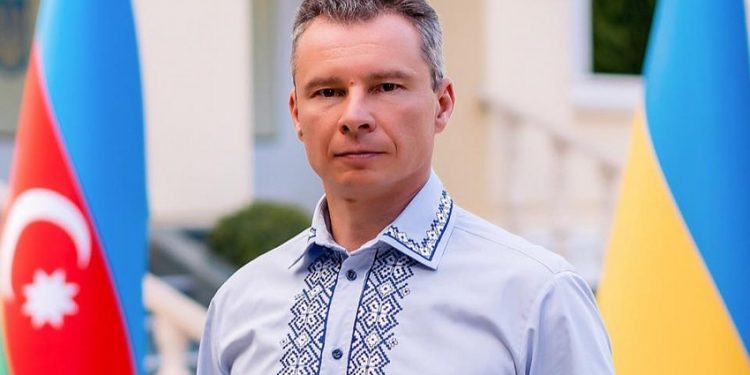 A month has passed since Russia launched a large-scale invasion of Ukraine. The whole world has finally seen that the true goal of the impudent enemy is the total annihilation of Ukraine, its people, history, culture, and traditions. Why? Because Ukraine is not what Russia wants us to be.

Ukraine strives for freedom, for a peaceful and efficient economy on its own land, for the development of democratic values, for our descendants to be proud to be Ukrainians and rightful members of the united European family.

On the other hand, today’s Russia is a monster that has been growing for many years on the garbage heap of the not quite disintegrated USSR, feeling its inferiority, building up anger and envy towards those who managed to change mentally, who found strength and courage to get out of the mud left as a legacy of the Soviet totalitarian system.

This is why the Russian leadership is deliberately trying to forcibly impose the ideology of its invented narrative of the “Russian world”, giving daily orders for the ruthless destruction of Ukrainian cities and industry, for the cynical shelling of civilians, schools, kindergartens, hospitals, and maternity clinics.

Today’s Russia is a terrorist state that seizes Ukrainian nuclear power plants in order to blackmail the entire world, that holds hundreds of thousands of Ukrainian civilians hostage, that has no qualms about stealing and forcibly transporting Ukrainian women and children from Ukraine to Russia.

The Russian soldier has become the tentacles of this monster, a symbol of the lack of morals, humanity, honor and dignity, clearly defined today as an invader, aggressor, fascist, criminal and rapist.

Despite this, within a month of the war Ukraine completely debunked the myth of the modern and professional “second best army in the world”. This army has already been as good as defeated by the Armed Forces of Ukraine and the Ukrainian people.

Partly realizing the failure of its futile and pointless “military operation”, the Kremlin is raising the stakes. Using its last trump card, the Russian authorities are threatening the world with the possible use of chemical, biological, and nuclear weapons. The aim is to attempt to sow panic and protest sentiments in society. In response, however, the Russian Federation is getting even greater resistance from the civilized world, even stronger support for Ukraine from our friends, and an even deeper consolidation of the Ukrainian society in confronting the Russian aggression.

Meanwhile, Ukraine is now on the brink of a humanitarian catastrophe. By destroying Ukraine, Putin is not only trying to reshape the entire system of the post-World War II world order, but also to lay the groundwork for a new Holodomor in the 21st century, while delivering a devastating blow to the food security of other countries.

Ukraine is one of the world’s leading exporters of agricultural products. There are real concerns today that the hostilities on the territory of our state could jeopardize an effective sowing campaign in 2022. Ukrainian farmers will not be able to do proper field work in the combat zones. As a result, the Ukrainian export of certain food groups (wheat, oats, buckwheat, sugar and rye) will be significantly limited.

It is estimated that 20% to 30% of the fields for winter grains, corn and sunflower in Ukraine will not be sown or will remain unharvested during the 2022-2023 season. Thus, because of the Russian military aggression, world food and feedstuff prices could go up by more than 20%.

The Armed Forces of Ukraine and the entire Ukrainian people continue to resist the enemy! Ukraine has rallied the entire civilized world around itself.

We are grateful to everyone who cares, who lent us a helping hand, be it military or humanitarian aid. We can feel your support. It brings us closer to victory—to our common victory!