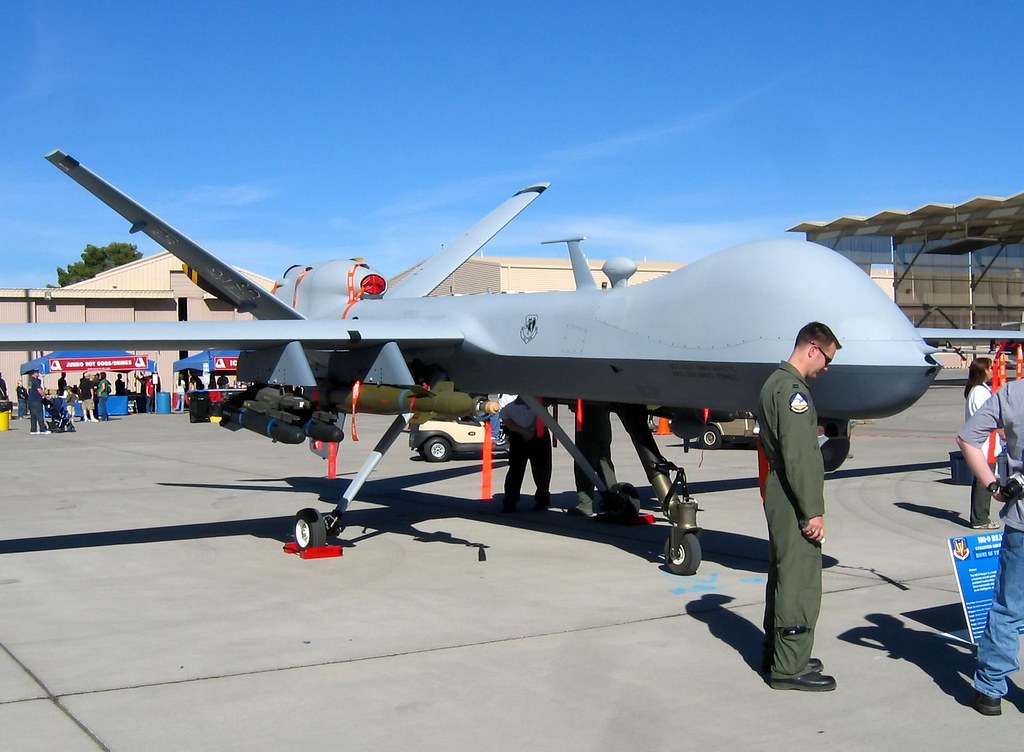 Autonomous flying platforms in one form or another have been around ever since aviation came into being but did not have the required smartness associated with such platforms of today. A drone, in technological terms, is an unmanned aircraft.

It can be described as a flying robot that can be remotely controlled or fly autonomously through remote-controlled flight plans and software embedded in its systems, working in conjunction with onboard sensors and GPS. At a lower level of awareness, what needs to be understood is that drones, just like aircraft, can be of two types—fixed-wing and rotary-wing. Both started with extremely low payload capability, which has now increased substantially based upon the type of avionics. For conventional operations and hybrid war, both types of drones can be armed with precision weapons that can be launched and guided to their targets or worked with the aid of artificial intelligence. Copter-type drones can also be employed as robotic munitions carriers in ‘suicidal’ mode against field fortifications, hardened vehicles or logistics dumps.

The recent Azerbaijan-Armenia war over the enclave of Nagorno-Karabakh also seems to be the cause of the current interest. The deciding factor that ensured Azerbaijan’s victory was the extensive military employment of drones in what has been one of those rare conventional wars in the last 15 years or more. Drones have been often spoken of and their role in Afghanistan is well known over the last 20 years but that is a different context altogether.

The war in Afghanistan remained a below threshold battle after the initial entry operations. Drones there have been more in the mode of surveillance and precision kills of terrorist leaders or destruction of hideouts based upon accurate information. The killing of Taliban leader Mullah Akhtar Mansoor (replacement of Mullah Omar) in May 2016 near the Pakistan-Iran border was ascribed to a drone attack as are many other such lower-profile killings. Interestingly the control of drone operations is done remotely from as far as Tampa, Florida, in the US through satellite-based communications.

In relation to conventional operations, why have drones suddenly acquired such a reputation? This needs a return to some earthy military basics. Just remember the possibility of a precision hit at the top of a bunker or a tank is always far less when it comes to artillery that fires parabolic. A hit by direct fire or by flat trajectory is what most protection caters to and that is frontal or broadside. Hence the tank is designed with thick armour plating in front, lesser protection at the sides and the least at the top. Bunkers similarly have strong frontal protection against direct flat trajectory fire and packed earth (or concretised) on top to cater for the possibility of a direct hit by a shell. Now with the drone, a top attack is always possible with precision direction and accuracy.

The tank and all its variants are suddenly vulnerable even more than they were to fast-moving combat aircraft or the attack helicopter. In the latter cases, the aircraft were manned and thus vulnerable, creating some competitive fairness in the battle between the aerial and the ground-based platforms. The coming of the armed drone changed much of that balance. You now have an autonomous, unmanned aerial vehicle loaded with artificial intelligence capability to discern its targets; its vulnerability is in comparison acceptable because of being unmanned. There are different ways by which such vulnerability can be neutralised and one of them is ‘swarming’. Its military definition reads as: a battlefield tactic designed to maximise target saturation, and thereby overwhelm or saturate the defences of the principal target or objective. Simply put it is a high ratio of aerial machines in comparison to the targets below, tanks, artillery guns or fortifications, to enable a smother effect at the tactical level. It has an overwhelming effect on the defender that is being attacked from different directions, and the air defence systems may be insufficient to handle the quantum of drones in the swarm.

With the surge in Indo-US relations and the signing of the Communication Compatibility and Security Agreement (COMCASA) in 2018, the field for acquisition and induction of armed drones into the Indian Armed Forces has opened up. 30 x Predator Sky/SeaGuardians equipped with encrypted systems are being sought at a cost of $3 billion. They can fly for up to 48 hours with a payload of 1,700 kg. This deal would bolster India’s military capabilities as the drones it currently possesses can only be used for surveillance and reconnaissance. Armed drones for a strike in the continental context can be employed both in the offensive and defensive mode and act as force multipliers. They are particularly useful as platforms to be launched if surprised on a particular approach or a sector before forces can build up. Copter drones for logistics resupply will emerge in large numbers in India with many companies attempting the connected technologies. Contingent upon payload capability, much of a force’s logistics can be supplied through this means allowing for a higher range of operational longevity, especially in the mountains. It will reduce troop fatigue and lighten up the burden of logistics planning.

In the field of hybrid warfare, armed drones will provide the Indian Army one capability that has been under much focus trans-LoC strikes, without hot pursuit. The developing technologies will in due course provide multiple options to strike at terrorist leaderships, and training and holding camps. With the capability to pinpoint locations due to communication intercepts, the ability to rapidly launch armed drones equipped with necessary artificial intelligence and armaments or munitions will transform the response mechanism. Even jungle hideouts in the J&K mountains or those in the Red Corridor can be engaged. All such responses will be without the inherent risk of a pilot being captured with the attached drama as was the case with the capture of Wing Commander Abhinandan.

Drone warfare is just in its nascent stages but the surge is going to happen with rapidly developing technologies. It is imperative that war-fighting doctrines are adequately shaped to absorb this new capability so that the Indian Armed Forces are fully capable of progressively exploiting them and converting them into war-winning means.