Before the Patriotic War, Azerbaijan repeatedly raised the issue of the state and fate of the cultural heritage destroyed and pillaged by Armenia in our occupied territories, officially appealing to UNESCO to take measures to protect it and send a mission to these territories. None of these appeals received an adequate response. 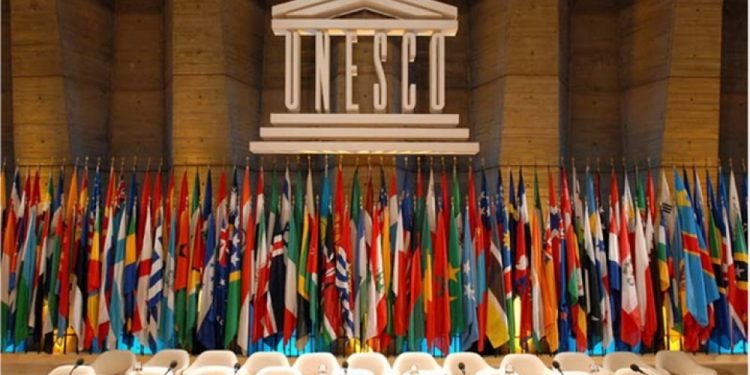 Strange things start to happen whenever Baku tries to start a dialogue with UNESCO. With exceptional speed and talent that smoothly turns into cynicism and hypocrisy, the leadership of this international organization pretends to be deaf and mute.

Judge for yourself: as early as in 1996, Baku informed UNESCO about the plundering of the cultural heritage in the territories of Azerbaijan occupied by Armenia and asked the organization to take action to ensure the return of this cultural heritage to Azerbaijan.

The book War against Azerbaijan: Targeting Cultural Heritage was presented to UNESCO in 2007. It contains a list of cultural and religious sites destroyed by Armenia in the occupied territories and the information about their deliberate Armenization and the misrepresentation of Albanian churches as Armenian. Zero adequate response followed.

Meanwhile, the 2005 UNESCO report on the 1995-2004 activities on the implementation of the 1954 Hague Convention for the Protection of Cultural Property in the Event of Armed Conflict clearly indicated that Azerbaijan had informed the UNESCO Secretariat about the situation in the occupied territories and requested the dispatch of a fact-finding mission there. The fact of the occupation was, as it were, recognized—after all, one cannot argue the obvious—but no real action was taken.

The functionaries of this international organization, which, by the way, subsists on Azerbaijan’s contributions too, chose not to hear Baku’s burning questions and “red-taped” them instead, muttering something vague in response to the legitimate indignation of the Azerbaijani side. We will send a mission, they said, but only after a peace agreement has been reached between Armenia and Azerbaijan. Until then, let the Armenians do whatever they want in the occupied territories.

The story with the mission had quite an asinine continuation. During the visit of UNESCO Director-General Kōichirō Matsuura to Azerbaijan in 2008, the Azerbaijani side proposed dispatching a UNESCO mission to the occupied territories. The Director-General said that they were keeping track of the matter but could not give any specific timeframe for the mission.

In 2015, Azerbaijan invited UNESCO to send a mission to investigate and monitor the destruction of the material and cultural heritage in the occupied territories of our country. No response.

In 2018, Azerbaijan once again appealed to the then newly-elected Director-General Audrey Azoulay to send a UNESCO mission to the occupied territories. Madame Azoulay responded by saying that as a humanitarian organization UNESCO had no wish to interfere in political affairs.

Finally, in the course of the Patriotic War, President of Azerbaijan Ilham Aliyev gave more than 30 exclusive interviews to foreign mass media. In all these interviews, the issue of Armenia’s aggression targeting the cultural heritage of Azerbaijan was raised. In addition, during and after the 44-day war, dozens of foreign and local media outlets recorded the evidence of vandalism against cultural sites in the liberated territories.

The liberated territories were visited by representatives of the diplomatic corps and international organizations accredited in Azerbaijan, and they saw this vandalism with their own eyes, posting their testimony on the internet. But UNESCO again became blind and deaf, ignoring the obvious facts. Moreover, it had the audacity to express concern regarding the situation with “Christian churches” in the conflict zone and to accuse Baku of being unresponsive.

The destruction of Muslim monuments can be disregarded, but a threat to the under-planted Armenian “Christian culture” is a completely different matter—beat the drums, sound the alarm.

Interestingly, no one could say that UNESCO is not doing anything at all. The organization has been working for three years to rebuild the Iraqi city of Mosul under the slogan “Revive the Spirit of Mosul”; together with the European Union, it allocated 12 million dollars for the reconstruction of the ancient city of Sana’a in Yemen; it is involved in the restoration of the Croatian Dubrovnik destroyed as a result of hostilities in the region.

UNESCO is concerned about the Syrian Palmyra and the Buddhas of Bamyan, Afghanistan, about the Timbuktu mausoleum in Mali and Abkhazia, where the organization sent a fact-finding mission at the invitation of the Georgian government in 1997. But it somehow steers clear of Azerbaijan in its activities.

UNESCO officials become blind and deaf when it comes to Azerbaijani cultural sites and historical heritage. According to the documents published by various international organizations, Azerbaijan in fact bought from the Armenians the bullet-riddled busts of Natavan, Uzeyir Hajibeyli and Bulbul, and the silver handbag, an exhibit from the Lachin Historical Museum, was sold at a Sotheby’s auction in London.

All this contradicts the 1970 UNESCO Convention on the Means of Prohibiting and Preventing the Illicit Import, Export and Transfer of Ownership of Cultural Property. The organization celebrated the 50th anniversary of the Convention in 2020 and adopted November 14 as the International Day against Illicit Trafficking in Cultural Property, and yet it remains silent on these issues, or, at best, brushes them aside with vague comments.

Established in order to preserve the most sacred values of humanity, its cultural achievements, which separate us from animals, UNESCO has rapidly mutated with regard to Azerbaijan, pushing the message that there is heritage that must be preserved and there are pariahs not worthy of concern. From an organization that ideally should unite the world, it has turned into an organization that divides the world on the basis of ethnicity and religion.

What signal did UNESCO send by raising the issue of “Christian churches” in Karabakh? Did they want to prove the clash of civilizations theory? Well, they succeeded. But by showing bias towards the Armenian side, UNESCO shot itself in the foot. The hypocrisy and partiality of this organization are obvious to the whole world, and it has yet to find out how badly it has damaged its own reputation.

And now, should its officials sing from their rostra about their “lack of political engagement” and “impartiality”, about being “above political conflicts”, there will always be someone who will take the speaker aside on the sidelines of international summits and ask them gently, “Why didn’t you do your job in Azerbaijan then? Were you afraid of seeing the devastation of nine cities and hundreds of villages, the transformation of Agdam into the Hiroshima of the ‘Caucasus’? Or did the Armenian lobby promise you something?”

UNESCO must act as an independent international organization in accordance with its mandate and respect its declared values. This is not an appeal, but a statement of fact. Otherwise, if it joins political campaigns, becomes a political instrument and sinks to the level of a foreign ministry department, it will lose its credibility and die as an international moral authority.

“The world is bigger than five,” Turkish President Erdoğan said recently, referring to the UN Security Council, who takes up the right to decide the fate of the world. “The world is bigger than UNESCO,” we can say now, if this international organization has taken up the right to decide whose culture and historical heritage are important and whose not so much.