Azerbaijan’s biggest trade partners in the region, the UAE and Saudi Arabia, have shared economic interests in establishing new trade links, but they also share common threat perceptions regarding Iran and radicalism. 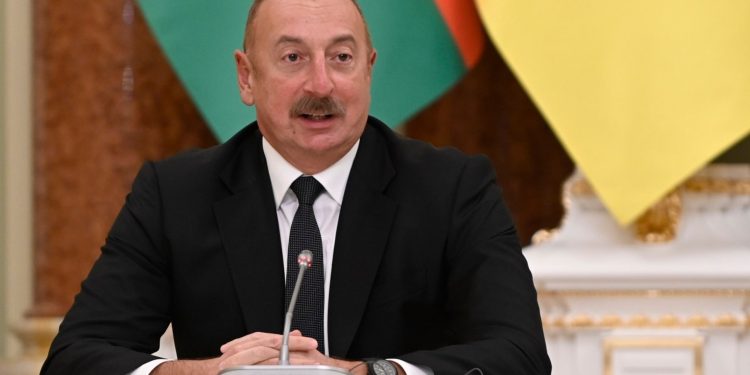 At the crossroads of east-west and south-north transit routes, Azerbaijan has seen its geopolitical importance increasing since the end of the 2020 Nagorno-Karabakh war. With the war’s end, Azerbaijan regained control over disputed territories from Armenia, and it has since started implementing economic transformation policies, following the example of nearby Gulf Arab countries. Azerbaijan’s biggest trade partners in the region, the United Arab Emirates and Saudi Arabia, have shared economic interests in establishing new trade links, but they also share common threat perceptions regarding Iran and radicalism.

Geopolitics From the Caspian Sea to the Gulf

Azerbaijan shares many political interests with Gulf Arab countries, particularly Saudi Arabia and the UAE. First, Baku has been pursuing an aggressive agenda against what it sees as religious radicalism, including activities by Muslim Brotherhood-related groups, and youth radicalization. Azerbaijan even moved against its ally, Turkey, in denying a proposal in May 2021 by the Turkish ultranationalist National Movement Party to establish a school in Shusha in the Karabakh region. This was likely due to its radical discourse and the scrutiny faced by its youth branch, the Gray Wolves, in Europe over attacks against Armenians and others.

Second, Iran is perceived as a common threat. Tensions between Azerbaijan and Iran have increased since September 2021, with numerous warnings from Iranian leaders against Azerbaijan’s close relationship with Israel and Turkey. Although Baku has attributed importance to pursuing a neutral policy between Iran and Israel, Israel’s support for Azerbaijan in the conflict in Nagorno-Karabakh changed the regional paradigms. As the security environment in the Gulf is changing quickly, with recent attacks on the UAE by the Houthis in Yemen, Azerbaijan could be a significant partner, on Iran’s northwestern border, to Gulf Arab states.

Moreover, concerning broader regional security, Gulf countries are emerging as mediators in the South Caucasus. The contribution of the UAE to the “regional peace and stability” between Azerbaijan and Armenia was praised by former President Armen Sarkissian, who in 2021 was the first Armenian official to visit Saudi Arabia.

Economics of an Azerbaijani-Gulf Rapprochement

In recent years, Azerbaijan has been working to diversify its economy from its heavy reliance on oil and natural gas by investing in other sectors, primarily tourism and renewable energy. The Gulf countries, specifically Saudi Arabia and the UAE, which have been diversifying their economies away from hydrocarbons, are an instructive model for this economic transformation. Moreover, Azerbaijan is currently trying to attract foreign investors to the Karabakh region, which was devastated by three decades of conflict.

As a transit country, Azerbaijan attributes importance to the establishment and maintenance of new trade routes. With the settlement of the Nagorno-Karabakh conflict, Baku’s place at the intersection of China’s Belt and Road Initiative and the International North-South Transport Corridor may offer it the opportunity to play a greater role, increasing connectivity with the Gulf countries and others. Furthermore, a recently signed agreement among Azerbaijan, Georgia, and Iran aims to connect the Gulf to the Black Sea, which could create economic opportunities for the Gulf Arab states if rapprochement efforts succeed with Iran.

Among the Gulf Cooperation Council states, the UAE is Azerbaijan’s largest trade partner, accounting for 76% of Azerbaijan’s trade volume with the Gulf in 2020. Bilateral trade turnover increased by 41% in the first half of 2021, according to Azerbaijan’s minister of economy, Mikayil Jabbarov. UAE Minister of Economy Abdulla bin Touq Al Marri said that total volume with Azerbaijan exceeded $1.2 billion in 2020. He called Azerbaijan a “friendly country,” and noted it is a popular tourist destination for Emirati citizens as well as for education, commercial, and investment opportunities.

Saudi Arabia is the second-largest Gulf Arab partner of Azerbaijan. Trade turnover with Azerbaijan increased by 47% in the first 10 months of 2021. As of 2019, the total public and private Saudi investment in Azerbaijan was about $370 million.

Saudi Arabia and the UAE could play significant roles in the economic transformation of Azerbaijan and investments in the Karabakh region. In January, the Khizi-Absheron Wind Power Plant held a groundbreaking ceremony. Saudi company ACWA Power has invested $300 million in the plant, marking the largest foreign investment in this sector in Azerbaijan. And in 2021, Emirati company Masdar Clean Energy signed a $200 million solar deal for the first foreign investment-based independent project in Azerbaijan’s solar power sector. Baku plans to increase its power capacity to 30% from renewable sources by 2030.

The Turkey Factor in Azerbaijan-Gulf Ties

Azerbaijan has long maintained a balance in its relations with Turkey and the Gulf states. Saudi Arabia was one of the first countries that recognized the independence of Azerbaijan in December 1991, provided humanitarian assistance to Azerbaijan during and after the 1988-94 Nagorno-Karabakh War, avoided establishing relations with Armenia until disputed territories were returned to Azerbaijan, and supported the territorial integrity of Azerbaijan during the 2020 Nagorno-Karabakh conflict. Similarly, the UAE has supported Azerbaijan’s territorial integrity, along with Kuwait and Qatar, and prevented its citizens from visiting disputed territories in Karabakh in 2018.

Baku needs regional and international partners, thus from the Gulf, to counter future threats from the Middle East, Northern Caucasus, and Central Asia. While relations with Gulf countries are far from the desired level, they are promising and advancing quickly. Azerbaijan and the Gulf countries could emerge as reliable partners and offer economic opportunities that have potential to expand to neighboring countries.