US increasingly concerned at Armenia as a sanctions buster

During a visit this month to Yerevan, CIA Director William Burns warned Armenia about assisting Russia to evade Western sanctions, including high-technology, imposed in response to the invasion of Ukraine on 24 February. 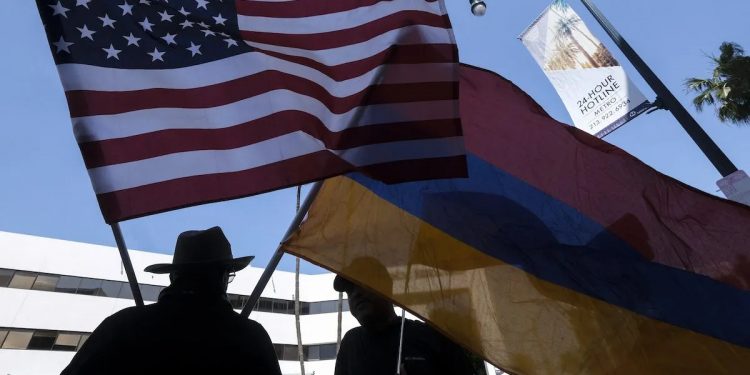 Armenia has a long record of assisting Iran to evade international sanctions, experience which will undoubtedly come in handy.  Burns reportedly also warned Armenia about becoming too close to Iran, a country the US and Israel have viewed as an existentialist threat for decades.

Armenian President Vahagn Khachaturian has praised Russia’s response to Western sanctions. Meeting Putin at the St. Petersburg ‘international’ economic forum, Khachaturian said he agreed with Putin’s explanations for his invasion of Ukraine, the so-called ‘special military operation.’ ‘It’s really a new era,’ he said , and ‘One should probably think about how to continue to develop in the new conditions that open up new opportunities.’ ‘I am sure that Russia’s economy will survive based on the resources and means at its disposal and given [what happened in] the last two months,’ he added.

The South Caucasus has a geopolitical faultline  that pits Russia, Iran and Armenia on the one side with Turkey, Azerbaijan and Pakistan on the other. This faultline is under pressure from efforts by the EU acting as an honest broker to have Azerbaijan and Armenia sign a peace treaty that would codify the outcome of the 2020 Second Karabakh War and end three decades of conflict. Turkey and Armenia are also negotiating to end an even longer period of bad relations.

Opposed to these peace developments are the pro-Russian camp in Armenia and the Armenian diaspora, which is sizeable in France and the US, and corrupt state officials long involved in smuggling and breaking international sanctions. The pro-Russian camp is particularly strong in Armenia’s Ministries of Foreign Affairs, where the diaspora has inordinate influence, and Defence, where old Soviet networks prevail.

Russia’s so-called peacekeeping force was introduced as part of the November 2020 ceasefire agreement. Azerbaijan has always remained suspicious because of Russia’s traditional support for Armenia where it has three, soon to be five, military bases. Nearly as many Armenians live in Russia as live in Armenia. The hawkish head of RT, Russia’s propaganda television channel, is an Armenian Margarita Simonyan who is well known for her anti-Ukrainian diatribes.

With Russia’s war in Ukraine going badly, the Kremlin is also desperately seeking mercenaries and military equipment from its allies. Russia feels an acute shortage of weapons and ammunitions in its war against Ukraine. Ukraine’s armed forces have destroyed 400 Russian jet fighters and helicopters, 1700 tanks, and 1,000 artillery and anti-aircraft systems. Armenia is assisting Russia by becoming second to Belarus as a supplier of military equipment to Russia, including Smerch multiple rocket launchers and four SU30 jet fighters purchased in 2018. Armenia’s recent large purchase of Soviet era ammunition is suspected to be for Russia. Armenia denied it had transferred the SU30 jet fighters but Western intelligence sources report they were in fact sent to Russia and are being used in its military invasion of Ukraine.

Millions of Armenians already have Russian passports who live in Russia and others who live in Armenia are offered passports in exchange to agreeing to fight in the Donbas region of eastern Ukraine or by sending so-called ‘humanitarian aid’ to Russia’s proxy entities there, the so-called Donetsk Peoples Republic (DPR) and Luhansk Peoples Republic (LPR). Russia has long disguised the sending of weapons as ‘humanitarian aid’ to the DPR and LPR and to the Armenian-enclave of Karabakh in Azerbaijan.

The faithfulness of Armenian Prime Minister Nikol Pashinyan’s negotiations with Azerbaijan and Turkey is put in doubt when Armenia is acting as Russia’s second closest ally, after Belarus, in its war against Ukraine. As Russian military analyst Pavel Felgenhauer writes, Armenia has preferred to build very close ties with Russia and Iran rather than adopting an independent and multi-vector foreign policy.

In contrast to Armenia and Belarus, Central Asian states such as Kazakhstan have distanced themselves from Russia’s war in Ukraine. Ukrainian President Volodymyr Zelenskyy recently thanked Kazakh President Kassym-Jomart Tokayev for refusing to recognise the DPR and LPR.

A surprising addition to countries that are assisting Russia in evading Western sanctions is Georgia.  Traditionally a close ally of Ukraine’s in their joint quest to integrate into NATO and the EU, Georgia’s de facto ruler, oligarch Bidzina Ivanshili is pursuing a pro-Russian foreign policy. Ivanshili made his billions in the 1990s in Russia and presumably the Kremlin has some kompromat on him.

Washington and Brussels are therefore both perturbed at Armenia and Georgia assisting Russia to evade Western sanctions.  More Russians have moved to Georgia than to Armenia since the invasion and not all of them are anti-Putin. In June, the EU recognised Georgia’s stagnation and only granted candidate status to Ukraine and Moldova, refusing to grant this to Georgia.

A mass influx of 134,000 Russians, particularly from the IT sector, have moved to Armenia since the invasion. Among those who moved is Ruben Vardanyan, a Russian businessman of Armenian origin who is included in Western sanctions against Russia. Ukraine’s military intelligence reported that 113 Russian IT firms moved to Armenia and nearly new 1,000 private companies were launched. Some of these are fronts for evaning Western sanctions, conducting espionage and working on cyber, hacking, and other activities against Ukraine. Armenian many companies registered in other members of the Eurasian Economic Union and some are serving as intermediary hubs for Russian high tech; Armenia is used for buying high tech products in the West which are then transported to Russia.

Armenia and Russia are cooperating to replace the US dollar as a means to withstand sanctions. The two countries central banks are discussing how a Russian ruble-Armenian dram exchange could facilitate a move from the US dollar.

Armenia, and to some extent Georgia, are playing a dangerous game in assisting Russia in evading Western sanctions. Short-term corrupt benefits to Armenian and Georgian officials, and geopolitical advantages to Armenia as part of its close ties to Russia, will be outweighed by being blacklisted by the US and the EU. Armenia is undermining the EU’s willingness to broker a peace deal and Turkey’s readiness for reconciliation by copying Belarus in increasingly becoming a Russian satellite.