No sooner has the ink dried on the document on gas supply cooperation between Azerbaijan and the European Union than the Kremlin lobby in Europe began to stir, attacking this decision. 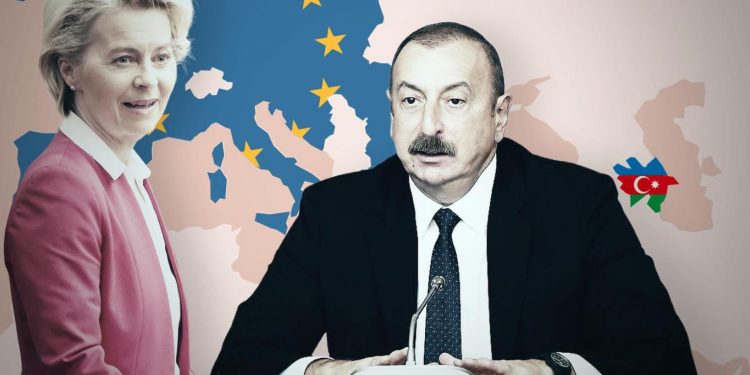 Map of Azerbaijan without Nakhichevan. Collage of German newspaper Welt.

Europe loves to talk about its accomplishments in the fight against corruption, while overlooking the obvious: many of Europe’s politicians were bought off lock, stock and barrel at some point, acting as agents of Russia’s policy of hooking Europe on the “gas needle”. Moscow was able to build an entire influence network in a number of European states, actively using it to promote its economic interests.

To be more precise, to stick a gas pipe wherever it could. The names and job titles are fascinating. Former German Chancellor Gerhard Schroeder, former Austrian Chancellor Christian Kern, Karin Kneissl, who served in the Austrian government but is better known for dancing with Vladimir Putin, former Italian Prime Minister Silvio Berlusconi—this is by no means the full list of those who made Europe critically reliant on Russian energy supplies at the expense of their countries’ energy security. It seems they forgot one of the key principles: you cannot put all your eggs in one basket.

While the Baltic states and Poland warned Europeans about the dangers of energy dependence on Russia and created alternative supply channels, a number of German, Austrian, Italian and French politicians saw Moscow as an opportunity to line their pockets. They wanted to secure a “golden parachute” for themselves by getting seats on the supervisory boards of Russian monopolies, from Rosneft and Gazprom to Russian Railways.

They even set up a special financial front, the secret company Wirecard, through which they funneled obscure cash flows: some of it for laundering and some for cashing. But they trusted their Russian partners too much. The COO of this company was a 42-year-old Austrian businessman named Jan Marsalek, whose handler was a former senior Austrian intelligence officer, Martin Weiss. Both were recruited by Russian intelligence. One day that was far from fine for Moscow’s clients in European political circles, Marsalek fled to Moscow, taking with him the entire Wirecard database of who in Europe received money from Russian intelligence services and corporations for lobbying their interests.

“A European security official said that Marsalek, who disappeared after taking a private flight from Austria to Belarus in June 2020, resided for a time in a Moscow apartment complex controlled by one of Russia’s intelligence agencies. That official also said Marsalek has been provided with a new Russian identity,” the CIA report for the case says.

After Russia’s invasion of Ukraine and the EU leaders’ firm commitment to cut purchases of Russian oil and gas, the top Trojan horses got a serious shake-up. Gerhard Schröder, stripped of some of the privileges he was entitled to as former chancellor, promptly scaled back his activities and stepped down from the Gazprom board of directors. Karin Kneissl left Austria altogether in a hurry, moving first to France and then to the Middle East.

According to the exclusive information we have obtained, the confiscated funds amount to about €8 billion—and that is the price of corruption in Europe, systematically carried out by Moscow to addict the old continent to the “gas needle”.

The top Kremlin Trojan horses immediately cut back their activities or even began to work with the investigation, gushing about those “treacherous Russians” who had led them astray.

But the real problem is different: agents and intelligence aside, there is a whole class of conscientious idiots in Europe, who have not yet realized the danger of the current situation. This is why they are honestly and selflessly trying to derail the EU’s gas deal with Azerbaijan. It was with the same enthusiasm that they opposed the construction and commissioning of TAP and TANAP. And if their ideological predecessors fought for hooking Europe on the Russian gas needle for quite specific material reasons, their successors are doing it free of charge, out of ideological aversion to Azerbaijan.

Member of the European Parliament from Germany, leader of the French Popular Republican Union party, chairman of the Regional Council of Provence-Alpes-Côte d’Azur—all these different people were united by the idea that Azerbaijani gas is the worst thing that can happen to Europe.

The EU is corrupt and morally bankrupt. Azerbaijan is objectively a totalitarian regime, consistently breaking more than 10 of the EU's own "Charter of Fundamental Rights". International monitors recognise that elections in Azerbaijan are not free or fair. "Trustworthy" my eye… https://t.co/axLuMoBO1X

Admittedly, they all have different motives. Some are not happy with the “dictatorial and corrupt regime” in Azerbaijan, and they should take a better look at themselves. Others are worried about the sacred “Armenian factor”. There is panic both in Yerevan and in foreign centers of the Armenian diaspora. Europe is going to buy Azerbaijani gas, which means that the Armenian sorrows will disappear from the international agenda, because “social being determines social consciousness”.

And off it goes: apparently Azerbaijan is one of the most corrupt countries in the world; it also attacked the peaceful Armenia for no reason at all and brutally… defeated it. And other nonsense of this kind, too predictable and tedious to list. In short, one must not buy gas from Azerbaijan.

Old moth-eaten talking points were also used, in particular last year’s article by social activist Ara Toranyan, which was signed by 50 French MPs. Each of the signatories specifically mentioned in their Twitter accounts that they had signed the article as part of a campaign criticizing Azerbaijan.

The gas deal between Azerbaijan and the EU, a measure absolutely necessary to overcome Europe’s economic problems, caused an unexpected reaction—a sudden stirring of European Trojan worms. They do not really care about the economy and the needs of the population. Radical environmental fascism (“gas is dirty fuel!”), protection of Armenian ambitions and blatant intrinsic hatred for Azerbaijan—this is their breeding ground, which they do not want to leave.