Armenian "high-level diplomacy" continues to hit rock bottom. Speaker of the Armenian National Assembly Alen Simonyan said at the joint press conference with the Speaker of the US House of Representatives Nancy Pelosi that Yerevan was "grateful for the efforts of the United States in brokering a fragile ceasefire agreement on September 14". 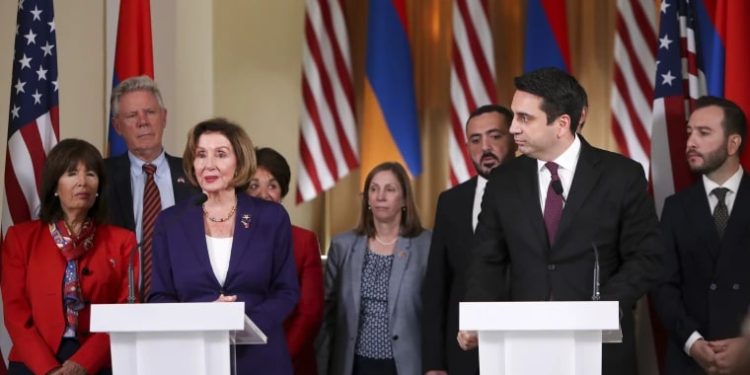 According to our informed sources, in reality the United States played no part in reaching the ceasefire between Azerbaijan and Armenia. Initially, on September 13, a ceasefire agreement was brokered by Russia. However, unfortunately, it was derailed by Armenia. The second time the ceasefire was reached through direct contacts between the sides. As for Simonyan’s statement, it is nothing but an attempt to “suck up” to the American guest.

For our part, we should add that fake news is something that does indeed happen. But it is beyond comprehension that the speaker of parliament should voice an obviously fake story, and at a press conference with an American guest, too.

To sum up, now is the time for Baku to stock up on popcorn and wait to see how Moscow will react to Alen Simonyan’s diplomatic fantasies, to the removal of the banner with Putin’s photo, and, in general, to the whole festival of sycophancy around Nancy Pelosi’s visit the morning after her own remarks that Russia has to “feel the pain”.