Visit with small cashback: what Pashinyan did in Iran

Armenian Prime Minister Pashinyan, who went to Tehran to make eyes at the country's ruling mullahs in general, appears to have justified his trip's goals, especially since they were apparently more than modest. 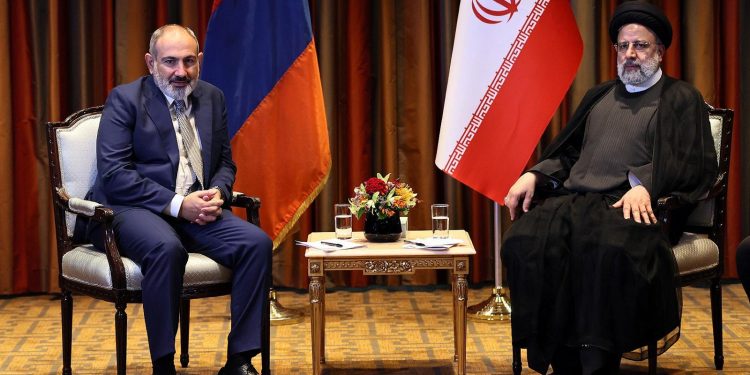 Simply posing proudly with President Raisi for journalists and signing some documents to give the impression of a political and diplomatic “breakthrough”. Furthermore, Iranian President Ebrahim Raisi declared a watershed moment in the development of bilateral relations. But what is the end result? There is clearly no strong movement here; rather, populism and empty statements pervade. In terms of the most distinct inter-party relationship, this is, in principle, the eternal theme of Yerevan and Tehran’s phony friendship.

Without exaggerating, it should be stated that the adherence to double standards and almost unmasked treachery characteristic of the two neighbours’ policies brings their positions even closer together. As you may be aware, Pakistan, Türkiye, Israel, and many Arab countries are wary of Iran’s political preferences. Armenia, of course, is a lower-class player, but it is growing increasingly uneasy in the company of neighbours to whom it asserts territorial claims. Only Iran, clearly not without intent, promises Armenians eternal friendship.

These are special times, and the positions of Yerevan and Tehran are united by one common task – to demonstrate mutual convergence of foreign policy and vectors of cooperation. And all because two countries with irrepressible ambitions have been and remain a threat to other countries in the region and are subjected to tangible external pressure for them for a number of reasons. One of them is that it is Tehran and Yerevan that in every possible way reject the policy of open doors and communications in the region, simultaneously, as far as possible, promoting the ideas of separatism. By the way, Yerevan and Tehran also have a lot in common here: during the 30 years of occupation of Azerbaijani lands, Armenians and Iranians have established drug trafficking and a flow of contraband, which they still do not want to give up.

But this is just one of the components of Iran’s toxic policy. In simpler terms, today, in the context of changing geopolitical reality, Iran and Armenia are the very rogue states that have accumulated such a tangible negative ballast in relations with their neighbours that they may well question their own existence.

However, it cannot be ruled out that Tehran’s willingness to cooperate with Armenia and attempts to somehow influence the geopolitics of the region are partly a temporary phenomenon. Even Armenian political scientists express serious doubts that Tehran’s active cooperation with Yerevan is serious for a long time. The situation can be changed both by internal political imbalance, protest explosions in Iran itself, and the game of its authorities, which can noticeably cool down Yerevan for a variety of reasons. So, without a doubt, it’s too early for Pashinyan to relax.

Meanwhile, Armenia’s clinical and political diagnosis is similar to Iran’s: Yerevan does not give up its ambitions in any way and tries not to fulfil its obligations to implement the Trilateral Statement of November 10, 2020, being confident that it will get away with everything. The arrogance of Yerevan, which does not even think of repenting to Baku for all the troubles that were inflicted on the Azerbaijani people, has also reached its peak, but Azerbaijan, offering peace, does not intend, however, to reduce the degree of pressure on the aggressor country.

The illogical behaviour of Yerevan, which continues to ignore the need to unblock communications in the region and delimit borders with Azerbaijan, unnerves even Moscow, which is the guarantor of the 2020 Trilateral Declaration. In addition, Russia, since it has found itself isolated, is extremely interested in implementing transit through the territory of the South Caucasus. One can also add to this the Kremlin’s extreme irritation over Yerevan’s decision to change its foreign policy course from pro-Russian to openly pro-Western. Moscow rarely forgives such games. So Pashinyan’s journey is nothing more than a debtor’s attempt to avoid his obligations behind Tehran’s back.

The statements at the joint press conference of Pashinyan and Raisi sounded deliberately loud and affected. And mostly at the instigation of the Iranian president, who hastened to declare “a turning point for the development of relations between the two countries”. That is, in the spirit of Tehran’s recent activity in the border district of Gafan, where Iran hastened to announce the opening of the Consulate General in this town, but in fact, did not even complete the construction of the diplomatic mission building. A feverish rush that caused laughter on social networks around the world.

And with the strengthening of economic ties between the countries, in fact, everything is not so simple. It is not the first year that Armenia and Iran have been making promising joint statements on this subject, which in reality mostly turn into a puff. The fact is that even taking into account Iran’s ties with the EAEU [Eurasian Economic Union] and the creation of a special economic transit zone in Armenia, the expansion of trade cooperation between Yerevan and Tehran is extremely slow. The development of economic cooperation is primarily affected by the obvious fact of Armenia’s financial insolvency. The country does not have the opportunity to invest in the development of joint projects with Iran, and therefore the impoverished Tehran is not in a hurry to do this – budget holes in its pockets interfere. As a result, Yerevan and Tehran have not been able to implement even the creation of a modern transit highway, and all transportation of goods from Iran to Armenia and back, as before, is carried out on a peripheral highway. But this semi-unpaved road clearly does not cope with this important task for them. And the funds for the much-needed autobahn, by the way, allocated by the Europeans, were simply plundered by Armenian officials. The railway connection between Armenia and Iran exists only on paper.

So what’s so special about the “turning point”? The decision to reach a turnover of $3 billion? But after all, to begin with, it is necessary to build a normal road, and only then negotiate.

Maybe the “turning point” is that the ministers of Iran and Armenia signed a memorandum of understanding on the extension of the agreement on electricity and gas. But even by the wording “extension”, it is clear that this project is not new, and has long been a basic element of cooperation between countries. Back in 2004, Tehran and Yerevan signed a barter agreement on gas in exchange for electricity for a period of 20 years, according to which gas exported by Iran supports the operation of power plants in Armenia, and in return, Iran imports Armenian electricity. Armenia has been receiving gas from Iran since mid-2009, implementing a barter deal “gas in exchange for electricity” at the rate of 1 cubic metre of “blue fuel” from Iran in exchange for 3 kWh of electricity from Armenia. In general, there is nothing to surprise the whole world here either.

The parties have not even stuttered about establishing a railway connection. In this context, only the project within the North-South corridor, which is designed to connect the Iranian Rasht and the Azerbaijani Astara, is relevant. And Armenia is definitely an outsider here, so it is unclear how, in principle, the logistics of the North-South corridor (from Russia to the Persian Gulf) will work through the territory of Armenia, which is actively lobbied by India. It is this way of economic transit, as opposed to the Zangazur corridor, that Tehran and Yerevan are promoting. Only now it is reported that within the framework of the program of meetings in Tehran, Iran’s Roads and Urban Development Minister Rostam Ghasemi stressed the full readiness of Iranian companies to develop transportation between Iran and Armenia and the creation of a new transit corridor between Armenia and the Persian Gulf through Iran’s Norduz. And therefore, Iran, as stated, “decided to cooperate with Armenia in the construction of tunnels, roads and buildings”. That is, again, some promising long-term construction, which, as in the case of the aforementioned autobahn, will most likely be plundered by the Armenian bureaucracy.

And this is just one of the negative scenarios that cause nothing but outright scepticism.

And what about political statements? Excluding, of course, the phrases on duty such as “the policy of good neighbourliness is one of the areas on which the Iranian government focuses,” Raisi, perhaps quite expectedly, repeated the mantra about the need to resolve regional issues “without the participation of foreigners”. In general, nothing new. Here, Tehran’s rhetoric is blurred and vague. If in this case the IRI implies cooperation between Azerbaijan and Israel and its ghostly presence in the region, then what about the barker of the Europeans in the region – Yerevan? After all, it is thanks to Armenia and its activity in Prague that the EU mission is now located on the territory of Armenia and even the OSCE mission has managed to partially work out. Besides, it is unknown who else Pashinyan intends to drag into Armenia. So it’s completely unclear what Raisi is talking about. Tehran should speak out more clearly in this context, ceasing to play ambiguity. In the meantime, it seems that the main violator of the commandments of Tehran is his beloved partner Pashinyan.

And the fact that Iran has once again started talking about the “policy of peace and security in the region”, and Yerevan actively agrees with him, is just a signboard of two countries that have an extremely destructive effect on the region, naively expecting the fulfilment of their inflated expectations, after which, however, it is possible that it may be very difficult for both of them.