Russia's almost month-long military aggression against Ukraine, with heavy losses of the Russian army in manpower and armored vehicles, is attracting increased attention of military experts. 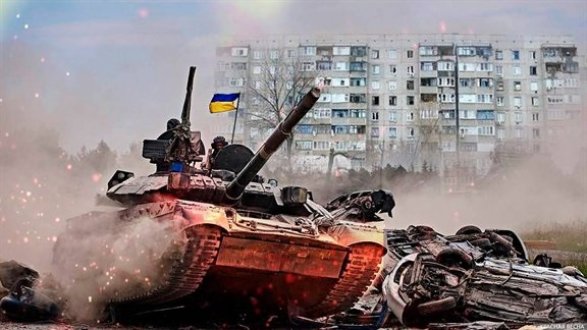 Ukraine with its much larger population would be able to stop an advance of Russian troops. Unfortunately, just for a few days

After the end of the 44-day war between Azerbaijan and Armenia, the Russian military weekly Zvezda observed that armored vehicles had become excellent targets for high-tech Azerbaijani drones.

“Modern tanks are in a way more vulnerable than World War II armored vehicles, as the number and nature of threats have increased. The recently concluded war in Nagorno-Karabakh has successfully demonstrated that,” the Russian weekly admitted two years ago.

To avoid losses, it was suggested that Russian T-72B3M and T-80BVM tanks be fitted with the Arena-M active protection system and additional explosive reactive armor units in the rigid hull on the sides.

However, as the current hostilities in Ukraine show, this is not saving Russian tanks, as they become easy targets for Javelin anti-tank systems and Bayraktar TB2 drones. For example, in his Vice article, Matthew Gault points out that using slat armor on tanks is not saving the Russian army from heavy losses in Ukraine either.

He believes that these “cope cages” were probably a response to the destruction of Armenian tanks by the Azerbaijani army in the 44-day war. The effectiveness of Azerbaijan’s military tactics is also emphasized by Max Boot of the US Washington Post.

He points out that the combination of Bayraktar TB2 drones and Israeli-made loitering munitions proved highly potent for Azerbaijan in the 44-day war. And, although according to the author, the Azerbaijani army destroyed 47 percent of Armenia’s combat vehicles, the real figure is over 80 percent.

Indeed, the 44-day war was a showcase of military tactics for the world’s powers. It was the first war in which the main tasks normally performed by “conventional” aviation, such as reconnaissance, targeting, and strikes at equipment, positions, and reserves, were handled by drones. According to many experts, this is not a mere substitution of one type of aircraft for another, but a crucial turning point in the long-standing warfare revolution. The effective use of unmanned aviation, kamikaze drones and Spike missiles in the 44-day war is being meticulously studied in foreign military academies.

After the 44-day war, many world experts began to talk about a warfare revolution that would change the tactics, operational art, and even army strategy. And today’s events in Ukraine once again confirm the effectiveness of the Azerbaijani Armed Forces—the natural result of years of reforms and heightened awareness on the part of the country’s leadership.