Was Pashinyan able to respond to Aliyev?

As we approach the fifteenth of November, the day on which the French Senate will discuss the situation in the South Caucasus, there is a veritable eruption of madness going on in Armenia. 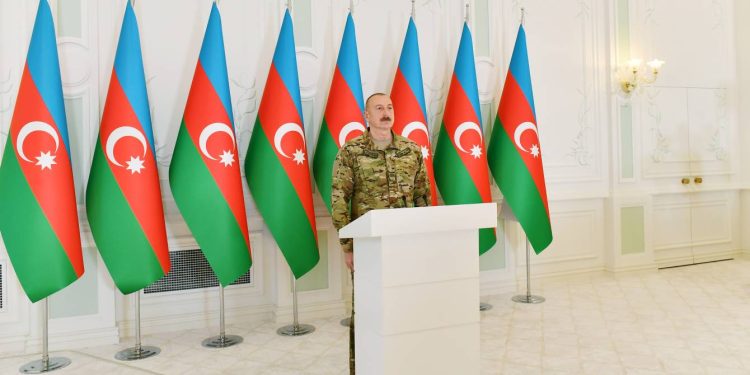 All the rabble has sprung into action, trying to paint a rosy background, saying that they will soon launch a counteroffensive. The nationalist epilepsy, nurtured by the caveman Turkophobia, prevents the hotheads from understanding the underlying causes of the current situation.

As recently as two days ago, in Shusha, at the celebration of the second anniversary of Azerbaijan’s victory in the Patriotic War, President Ilham Aliyev warned Irevan: “Armenia should not forget the lessons of the Second Karabakh War. They should remember that playing with fire will cost them dearly. If anyone there, be it the government, the opposition, or some element sent or instructed from abroad, harbors sordid intentions against us again, they will see our fist again…”

Against the background of the obvious strengthening of Azerbaijan, its army and economic capacity, Prime Minister Nikol Pashinyan dove headfirst into the Armenian radicals’ campaign. He does not have the guts to stand up to his internal enemies, who berate him every step of the way, accusing him of corruption and defeatism.

Cornered by his own people, the head of the Armenian government found nothing better to do than use rusty ammunition, claiming that “Baku is plotting a genocide against the Karabakh Armenians”. In his mind, Baku refusing to let international organizations come to Karabakh is a manifestation of radicalism, while Ilham Aliyev was very clear about the future of Azerbaijan’s Armenians: “We will not discuss this with anyone, it’s our internal issue.”

Was that not clear enough? Or are Armenian heads so clouded by the ravings of the French leader Macron that their sense of reality fails them? Most likely.

Pashinyan swears that there are no Armenian troops in Karabakh and that the local “defense army” protects the interests of Armenians there, as if during the 44-day campaign it was not Armenian citizens who paid with their lives for the de-occupation. And why did they have to be buried in the Yerablur military cemetery in Irevan?

Have Pashinyan and the likes of him forgotten the protests of the parents of the dead occupiers who asked, “How much longer will our sons continue to die on a foreign soil?”

The head of the government complains that “Baku refused to send a monitoring mission to Karabakh to make sure there were no Armenian troops there.” He pretends to be a simpleton, but his acting is not convincing.

He knows for a fact that Baku is keeping a watchful eye on everything that is going on in Karabakh. Otherwise, there would not have been a pre-emptive operation around Mount Farrukh, where Azerbaijani soldiers firmly suppressed the movements of Armenian illegal armed groups. This was followed by Operation Vengeance, when the Armenians had to pay for the death of one Azerbaijani soldier with the lives of more than 40 war criminals.

The road from Armenia to Karabakh is also controlled by Azerbaijani troops, who record every single detail. Facts of smuggling weapons into Karabakh are known. Be that as it may, the revenge-seeking military will bitterly regret their actions, and Ilham Aliyev warned them about this on November 8 from Shusha. If they will not understand when spoken to nicely, they have only themselves to blame.

On November 10, revanchists and obscurantists of all stripes will hold a torchlight procession in Irevan to the Embassy of Russia, whom they see as an evil force that refused to help Armenia in the 44-day war. They do not tire of bashing the trilateral statement of November 10, 2020, that act of surrender, in a vain attempt to free themselves from their commitments.

But one wonders why the Armenians are blaming everyone but themselves for their failure. After all, Armenia lost a strategic game because of its own stupidity and arrogance.

Robert Kocharyan and Serzh Sargsyan plundered half of the country, throwing the other half into the war machine. Were they not the ones preparing for a permanent confrontation with Azerbaijan?!

Ilham Aliyev chose a path of his own. He strengthened the economy, built a strong army, launched a large-scale integration program, and added solid foreign policy capital to the country’s balance sheet. As a result, he won a historic victory.

So, who is to blame for Irevan’s fiasco? Is it not the Armenian establishment, who cheated their own people?! How hypocritical must one be to accuse Azerbaijan of pursuing a “genocidal policy”?

Perhaps the pallid countenance of the oppressed Pashinyan gives comprehensive answers to all these questions, including the rhetorical ones. In the face of the opposition’s onslaught he is an utter stupor. He should keep quiet and deal with his internal opponents, who replicate the fascist style, resorting to the spectacular moves of Goebbelsian methodology.

But it should not be forgotten that the Germans carried out mass fiery rallies while enjoying the public’s favor.

Armenian society, on the other hand, is depressed because it is disappointed by politicians who have brought the unhappy people to a dead end. Why the hell, one may ask, does the indifferent crowd, viewed by the revanchists as a herd of sheep, need this torchlight affair?

It is impossible not to see how distraught Nikol Pashinyan is. The author of a useless policy, utilizing all his reserves, asserts that “the Armenian people is bound by fraternal feelings and partnership relations with dozens of Islamic countries and nations”. It turns out that Azerbaijan does not fit in this list only because “it resembles al-Qaeda and ISIS with its actions”. As if the genocide in Khojaly, ethnic cleansing and skinning of living Azerbaijani children were carried out by aliens, not by Hay butchers.

Then again, even without an explanation, it is clear that he has no proof to offer in his response to the Azerbaijani leader regarding the latter’s speech at the celebration in Shusha. “A country destroying mosques cannot be friends with Muslim countries. Can leaders of Muslim countries open their arms to embrace those destroying mosques? This is nothing but hypocrisy. This is betrayal. There is no other name. This is why we have isolated Armenia from the key pillars of the Muslim world…” the President of Azerbaijan said, publicly shaming two-timers and hypocrites, who are still flirting with the aggressor out of malevolence and unwillingness to accept the new realities.

Armenian nationalism is a dangerous and incurable disease. Its carriers run from the truth, not realizing the seriousness of their fate. They have come to strongly believe in the legend that there were “unforgivable mistakes” of big politics at the beginning of the twentieth century, which left them disadvantaged.

We are talking about the notorious territorial issue. The Treaties of Moscow and Kars remain painful thorns in the Armenian side. They should remember that if there are historical mistakes to speak of, those actually took place when the Hay were relocated to the Caucasus. This is where the headache of all the nations fated to tolerate this disgruntled whiny mass on their doorstep comes from.

They are hellbent to fight a perpetual battle against the Turkic and Muslim worlds, not realizing the immutable truth in themselves. This path leads them to self-destruction. Perhaps it is a good thing that they just won’t stop?