Gruesome revelations illustrate the deep political turmoil in post-war Armenia, and how this has affected the matter of POWs. 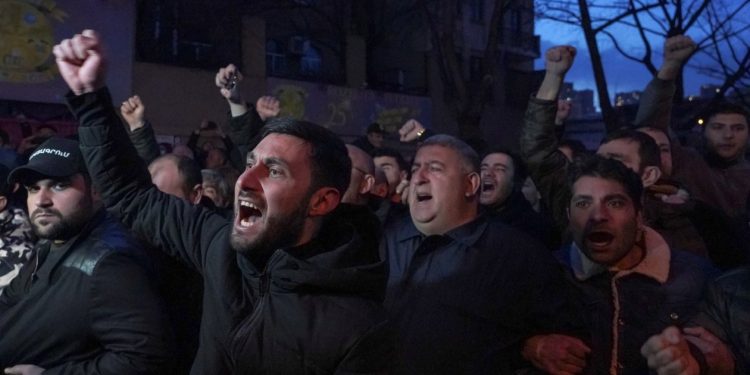 A few days ago, the Armenian public woke up to nationwide shock as the scandalous photos (WARNING: graphic content) and video footage showing the remains of the Armenian soldiers killed in the forty-four-day Karabakh War in 2020 appeared on social networks. The leaked materials were recorded in a morgue in Abovyan, a town some 15 km north of Yerevan. The photos, taken by the relatives of the dead soldiers who forced their way into the mortuaries to see the scene themselves, showed a number of plastic bags filled with human remains left in the basement without refrigeration.

Armenia’s Ministry of Health admitted that the corpses had been kept in the Abovyan Forensic Center, denying at first the public claims that the remains were stored in degrading conditions. However, senior officials, including the Minister of Health Anahit Avanesyan, had to publicly apologize later for the “improper maintenance of the bodies and remains.” Avanesyan conceded that she was wrong not to have personally inspected the medical-forensic procedures in the morgue.

This case was another vivid illustration of the deep political turmoil, a paralysis of state apparatus and public governance, in post-war Armenia. Former President Robert Kocharyan’s recent comeback as a major political challenger to Acting Prime Minister Nikol Pashinyan in the latest polls indicates that Armenia may stumble into a new series of internal crises after the June 20 parliamentary elections, as neither Pashinyan nor Kocharyan may easily accept election results favoring their opponent. Its destabilizing repercussions would not, however, be limited to domestic politics, and would spill over to the foreign policy arena, hindering reconciliation efforts put forward by Azerbaijan and Russia. Although the Azerbaijani side views the Karabakh conflict as being solved for good by the trilateral agreement signed by the leaders of three countries in November 2020, Armenian leaders do not accept this reality. Lacking military capabilities to challenge the new status quo supported by Azerbaijan and its treaty-bound ally Russia, Armenia opts for reverse Clausewitzian tactics of the continuation of war by other means (sabotage groups, lobbying, etc.).

Recent incidents along the state borders in the Lachin district of Azerbaijan and the Syunik region of Armenia, where Yerevan accused Baku of encroaching into its internationally recognized territories, once again showed the vulnerability of regional stability to diversionary moves by domestic actors. The Armenia-Azerbaijan border has not been delimited since the two countries gained their independence from the Soviet Union in the early 1990s due to the conflict over Nagorno-Karabakh. Therefore, Azerbaijan’s attempts to secure its newly-regained borders became a propaganda tool for hawkish forces (especially Kocharyan) in Armenia, spreading systemic disinformation on social networks to undermine their major competitors’ power base in domestic politics. As Ayaz Rzayev from Topchubashov Center has argued, Azerbaijan’s demarcation of its borders with Armenia has been a routine process involving certain technical issues, while Armenia’s inadequate reaction to it was nothing more than certain groups’ efforts to strengthen their hand just before the parliamentary elections. The difference in the Armenia Alliance’s (Kocharyan’s party) ranking in the polls taken right before and after the border incident is telling in this regard: while Kocharyan’s share as a very favorable Armenian politician was a mere 5 percent (against Pashinyan’s 16 percent) in the International Republican Institute’s early May survey, his election bloc’s popularity rose to 20.6 percent in June, narrowing the gap with Pashinyan’s My Step Alliance (22.4 percent) to less than 2 percent.

It is in this context that an internal scandal revolving around the degrading treatment of the corpses of Armenian servicemen may shed new light on the dispute between Armenia and Azerbaijan over the return of detainees (Armenia calls them prisoners of war) Azerbaijan captured after the signing of the ceasefire agreement in November 2020. When the Health Ministry of Armenia announced it had identified servicemen killed in action and disclosed their number in early January, many thought the process was over. However, it recently became known that the remains of over 200 Armenian soldiers had been hidden from the public for seven months or so. Whatever the tactical rationale behind the Armenian leaders’ cynicism on this issue, this political blunder might once again reinforce the argument that Armenia is not an honest broker in the POWs dispute. Azerbaijani authorities have repeatedly announced that Baku handed over all prisoners of war to Armenia after the November 10 ceasefire deal. At the same time, Azerbaijan has been adamant on its position to put on trial several foreign mercenaries and Armenian conscripts for killing Azerbaijani civilians and staging sabotage operations after the ceasefire agreement.

Yerevan still insists that Azerbaijan obfuscates facts on the ground and refuses to return more than 150 (in some accounts, more than 200) POWs to Armenia. Azerbaijan in turn says it captured 62 Armenian soldiers whom it does not consider POW but members of sabotage groups. What makes matters worse is the relatively active rhetorical involvement of Western powers—especially France, Canada, and the United States—on the side of Armenia, ignoring the Azerbaijani side of the story. However, the “morgue affair” indicates that Armenia is prone to skewing the facts on its losses in the 44-Day War in Karabakh and exaggerates the numbers to attract international attention to its cause. Accordingly, most of those who are claimed to have been in Azerbaijani captivity could actually have been kept in Armenian morgues. Yerevan’s silence about revealing the actual number of its losses further blurs the picture. Rather than stepping up efforts to find the bodies of lost soldiers on the battlefield, the Armenian government directs any discomfort among the local population on this issue to the phantom POWs held in Azerbaijan.

It is to be noted that Azerbaijan let Armenian collect its’ soldiers remains in Karabakh, and further mutual understanding in this regard might only facilitate the peaceful conduct of relations between the two countries. External parties with an interest in regional peace could contribute to this process by engaging both sides in a working multilateral format rather than putting the blame on one side, hence further damaging the newly emerging post-war reconciliation. Overall, it might be dangerous to tie the already fragile situation in the region to the domestic power games in far-away countries which mainly lack nuance on what is happening on the ground in Armenia and Azerbaijan.

Rusif Huseynov is the Director of Topchubashov Center in Baku

Mahammad Mammadov is a research fellow at Topchubashov Center