What did Gandhi do to displease “civilized” Armenians? – An excursion into history

The commotion rages on around the desecration and burning of the monument to the Indian national liberation movement leader, the great thinker and humanist Mahatma Gandhi in the Armenian capital. The act of vandalism was committed soon after the statue had been installed at the full expense of the Indian side. 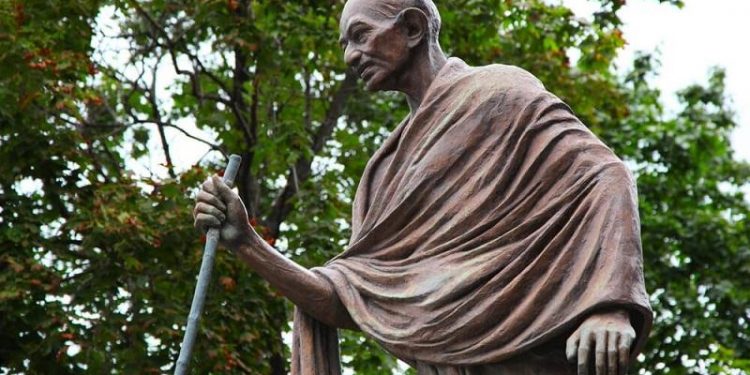 Some representatives of the “ancient civilized” people took revenge on the founding father of modern India by desecrating and setting on fire his statue, because Gandhi, it turns out, was a “hater of Armenians” and a “controversial figure from the point of view of Armenian history”. His main alleged crime is not recognizing the so-called “Armenian genocide”. Further still, Armenians don’t like it that Gandhi’s position continues to influence India’s stance on the issue to this day as it refuses to recognize the fiction.

The desecration of the monument virtually caused a diplomatic scandal. At least the Indian Ambassador to Armenia Kishan Dan Dewal declined, in no uncertain terms, the invitation to meet with the activists of the anti-Gandhi hysteria that gripped Armenia. The response of the embassy was simple and very straightforward: “Thanks to your propaganda of hatred, the statue of Mahatma Gandhi was desecrated… The ambassador does not want to meet with you.”

Meanwhile, this new act of Armenian vandalism gives us a reason to look back at the fair position Mahatma Gandhi, one of the most prominent figures in modern history, indeed held on the so-called “Armenian issue”. Let us elaborate.

We should outright confirm that Gandhi did have special respect for Turkey and its people and did not recognize the notorious “Armenian genocide in the Ottoman Empire.” Believing Turkey to be one of the countries most affected by World War I, he condemned the unfair treatment of it by the great Western powers. Gandhi also backed up his position with serious practical moves.

For example, Gandhi supported the All-India Khilafat Committee founded in India in 1919, a massive movement of the country’s Muslims who united in defense of the Ottoman Empire, destroyed by the West, primarily Great Britain, as the spiritual and political center of the Islamic world. The Indian National Congress led by Gandhi decided to unite with the Muslims in the fight against the British colonialists. These combined efforts were also manifested in the common position of the Congress and the “Khilafatists” on the Treaty of Sèvres signed on August 10, 1920 and dividing the Ottoman Empire into spheres of influence between the leading powers of the League of Nations. Gandhi vehemently condemned the treaty as unjust and oppressive for the Turkish people and demanded it be abolished.

Of course, the position of the leader of the Indian national liberation movement could not ignore the “Armenian issue” either, since it was Armenians who became one of the instruments in the hands of the victorious imperialist powers after World War I to punish the losing Ottoman state. While the Turks were perceived by Gandhi as allies of the Indians in the struggle against British rule, Armenians, who had betrayed the Ottoman state, on the contrary, were regarded by him as sidekicks of the imperialists.

Gandhi expressed his observations of the activities of Armenian leaders and political organizations as follows. “The notion of the Armenian race as noble, excellent, progressive and polite… shows absolute ignorance of the matter.” He saw the explanation to the anti-Turkish position of the West in the fact that “the portrayal of Turks and the Ottoman Empire is imbued with European propaganda and fanaticism of European Christians who hate Muslims.”

Being a true democrat, Gandhi did not deny Armenians the right to self-determination, but he believed that it would be best ensured within the boundaries of the Ottoman state. Gandhi’s hopes of restoring the latter to its former borders were dashed in 1923 when the Turkish Republic was established. His attitude towards the Turks, however, never changed and even evolved in the new historical conditions.

Indian patriots led by Gandhi provided all possible support to the national liberation movement of the Turkish people led by Mustafa Kemal. In 1922, Gandhi initiated a collection of donations in support of the Turkish army. The raised amount was handed personally to Mustafa Kemal, the future Ataturk.

The relations between Turkey and India, two allies in the anti-imperialist struggle, developed positively for a long time. Turkey was one of the first countries to recognize India immediately after it declared independence in August 1947. The relationship has had its ebbs and flows since then, but, despite the history of rapprochements and alienations, Turkey invariably honors the memory of Mahatma Gandhi, a sincere friend of the Turkish people.

There are streets named after Ghandi and monuments erected to honor his memory in Turkish cities. In 2019, Ankara hosted an exhibition dedicated to the 150th birth anniversary of the great man, and a special postage stamp with the image of Gandhi was issued to mark this date.

Then again, all of humanity cherishes Gandhi’s name. Even in London, the capital of Great Britain, a statue of the Great-Souled One was unveiled in Parliament Square in 2015, despite the fact that Gandhi had fought against British colonialism all his life. Speaking at the unveiling of the monument, Gandhi’s grandson said, “How many countries celebrate the life work of a man who opposed it with vehemence for more than three decades? Not many. Britain does, and Britain celebrates Gandhi today because while oppose it he did, he opposed it in a cause that Britain now sees was just and in a way the world now sees was fair.”

And yet, there seems to be one country in this world that has a different view of both Gandhi’s personality and his struggle for the triumph of justice. This country’s impressive expertise in vandalism so clearly demonstrated over almost 30 years of occupation of the Azerbaijani territories now includes one more achievement—desecration of the monument to the Grand Old Man of India for the sole reason that “the most civilized nation” found him guilty of sympathizing with the Turks and not supporting the lie about the “Armenian genocide”.