What does Pashinyan’s election victory mean for Armenia?

Many had been angry at Pashinyan after last year’s Nagorno-Karabakh war, but having won the snap poll, he may now usher in a period of easier relations with neighbours. 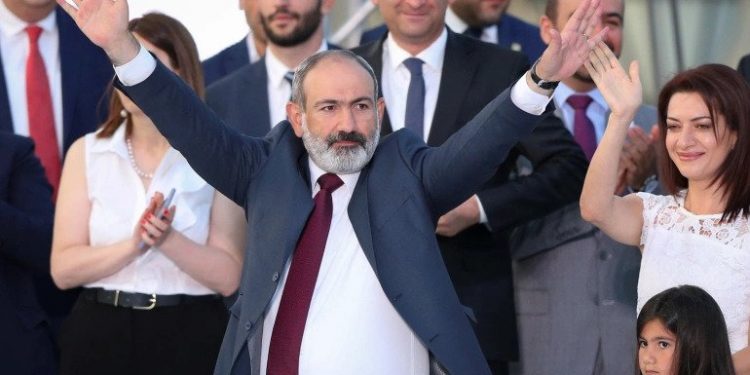 He told the flag-waving crowd his re-election meant the crisis was now over, referring to the protests against him following last year’s defeat against Azerbaijan in the Nagorno-Karabakh war, which triggered Sunday’s snap poll.

The government, he said, could “work as usual” again to build a new Armenia.

He also called for unity after a divisive election campaign saw threats and insults exchanged, leaving some fearful that the confrontation would spill into the streets.

Months of protests over his handling of the war had led to an internal political crisis and Prime Minister Pashinyan stood down in April.

There have been rallies for and against Pashinyan since the vote, but no reports of violence nor arrests.

The Armenia Alliance, which came second with 21 percent of the vote and is headed by former President Robert Kocharyan, has announced its plans to challenge the election results.

During his time in office, Kocharyan was accused of rigging election results, leading to protests in 2008 and a heavy-handed police crackdown that killed 10 people.

Election observers, however, have not expressed concern about the legitimacy of the vote – Armenia’s second free and fair elections after the “Velvet Revolution” of 2018.

Experts say the result is key to the country’s future and that the way in which Armenian society manages post-war political developments will likely make or break its democracy.

Some have said it could also mean a softening of relations with arch-foes Azerbaijan and Turkey.

Many touted the vote, which involved 26 parties and blocs but became essentially a two-horse race, as offering a choice between security and democracy, with democracy coming out on top.

Pashinyan came to power after leading the 2018 revolution, pledging reforms such as an anti-corruption drive, while Kocharyan represents the overthrown old guard which pushed for expanding the armed forces.

“Election campaigning involved disinformation, false narratives and the manipulation of people’s fears by all sides,” said Sossi Tatikyan, a consultant on Armenian foreign and security policy. “Many people voted for Pashinyan because they feared the return of the previous governments, who are associated with corruption and restrictions in political and civil rights.”

However, Tatikyan believes the vote demonstrates Armenians’ “determination” to resolve problems with defence, security and the economy “without sacrificing democracy and human rights”.

Not everyone agrees, though.

There were reports of protests in the city of Stepanakert, the main city in Nagorno-Karabakh, on Monday.

The region is internationally recognised as Azerbaijani territory, even by Armenia, but is run by ethnic Armenians who either want to secede or join Armenia.

Several wars have been fought over it, including last year’s conflict in which more than 6,000 people died from both sides.

After the Armenian leader in Nagorno-Karabakh, Arayk Harutyunyan, congratulated Pashinyan on his win, protesters in the region called for his resignation.

The vote was also being closely followed by Armenia’s Soviet-era master Russia, who soon offered congratulations on a “convincing” victory, as well as in Turkey and Azerbaijan.

Turkey backed Azerbaijan in the six-week war last year, providing sophisticated weaponry such as drones that helped sway the fight in their favour.

Turkey and Armenia have no official relations, with borders between the two countries having been closed since 1993. Relations between Baku and Yerevan are similar.

Yet Pashinyan’s win could mean a thawing; he was the leader who signed a Russia-brokered agreement to end the conflict and return swathes of territory seized in the previous war back to Azerbaijan.

On a visit to Baku last week, Turkish President Recep Tayyip Erdogan announced that a regional platform involving six countries – Turkey, Russia, Iran, Azerbaijan, Georgia, and Armenia – would be established to increase integration in the region.

“We are willing to make all kinds of sacrifices. Mr Putin as well. With steps to be taken in this regard, the region will become a peace zone,” he said.

“We hope Armenia will grasp this hand extended in solidarity and take an opportunity to shape a common future together.”

In May, Pashinyan said: “Turkey is our enemy but that enmity must be managed”, suggesting a possible departure from years of hardline hostility.

Vicken Cheterian, a political analyst who teaches international relations at Geneva’s Webster University, said shifts from the status quo could emerge within the next year.

“After this election, I think there will be at least some more serious attempts to see how the post-war and post-election relations between Armenia and its neighbours will be shaped,” he said.

“We will see whether there will be a serious process of normalisation or the opening of borders, communications and diplomatic exchanges or whether we will fall back to the same pattern.”

When it comes to Russia, however, experts have predicted no considerable shift in policy, only that Moscow’s influence is likely to continue to grow.

The increased post-conflict dependence on Russia will be hard to manage for Pashinyan, especially as it brokered the Nagorno-Karabakh ceasefire and 2,000 of its peacekeeping troops remain posted there.

“The election outcomes do little to challenge Armenia’s relations with Russia. Both before and after the Velvet Revolution, Russia has enjoyed structural superiority relative to Armenia,” said Anna Ohanyan, a nonresident senior scholar in Carnegie’s Russia and Eurasia Programme.

“Post-war, Russia now holds more cards than Armenia, but Armenia’s continuous reliance on participatory politics gives it leverage with the Kremlin. With this electoral outcome, Pashinyan will be able to continue and work with the Kremlin in implementing the trilateral Nagorno-Karabakh ceasefire agreement.”

AL JAZEERA
If you want to contribute and have specific expertise, please contact us at editor@aze.media
Share6Tweet4SendShare